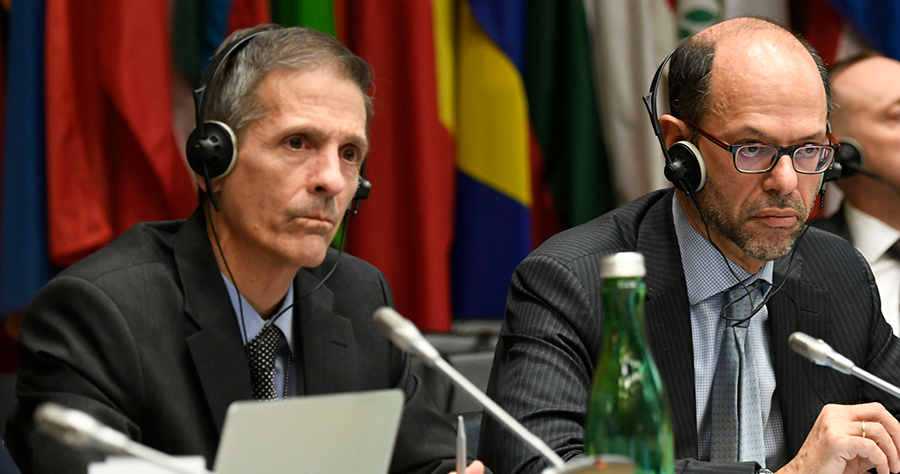 USOSCE Acting Deputy Chief of Mission Greg Macris and Permanent Representative of the EU to the OSCE Ioannis Vrailas listen to testimony from Crimea activists on February 26, 2019 in Vienna, Austria.

Remarks at the Co-hosted Discussion “FIVE YEARS AFTER: Human Rights Situation in the Autonomous Republic of Crimea and the City of Sevastopol (Ukraine)”

Thank you, Madam Chair, and a warm welcome to colleagues and friends who have gathered here today. It is an honor to be with you and to hear from people whose lives have been so deeply affected by Russian aggression. Even five, long years after Russia’s illegal invasion of Crimea, the fact that so many participating States are present and supporting this event reflects the degree of political relevance and weight that we at the OSCE place on the human rights situation in Crimea and Sevastopol.

I’d like to wish a special welcome to Oleksandra Romantsova, Andrey Yurov, Eleonora Bekirova, and Lilia Hemedzhy. They have all traveled quite a distance to be with us here today, and several travelled at great personal risk to themselves. Representatives of Civil Society provide the ground truth and much-needed factual basis to our discussions here at the OSCE, but also remind us that the issues we confront diplomatically affect real people. More than that, your work gives us inspiration. Eleonora Bekirova’s presence reminds us that Russia’s abuse of human rights creates a ripple effect impacting families, friends, and the wider community. So, heartfelt thanks to you all for being with us here today.

Five years ago, Ukrainians from all walks of life and all regions of the country came together on the Maydan to demand their government recognize the will of the Ukrainian people to join Europe. We are proud to honor the sacrifices Ukrainians made five years ago – and every day since then – to realize Ukraine’s European destiny.

It was also five years ago that Russia seized and occupied Crimea. Let us not forget Russia’s staged and illegitimate referendum in which residents of Crimea were compelled to vote “whether to leave Ukraine or join Russia” literally under the gun of heavily armed foreign forces.

The United States will continue to stand by Ukraine as it faces ongoing Russian aggression and hold Russia accountable for both the large-scale civilian deaths, displacement, and destruction in the Don River Basin; and its relentlessly abuse of Crimean Tatars, ethnic Ukrainians, and others who oppose the occupation in Crimea.

Over the past five years, Russian occupation authorities in Crimea have further engaged in a campaign to suppress dissent and censor information about its shameful abuses there:

That is why it is so important for us to hear from grassroots activists, who can convey the reality on the ground to us, when we are not allowed to see it for ourselves. We are in awe of your dedication and bravery.