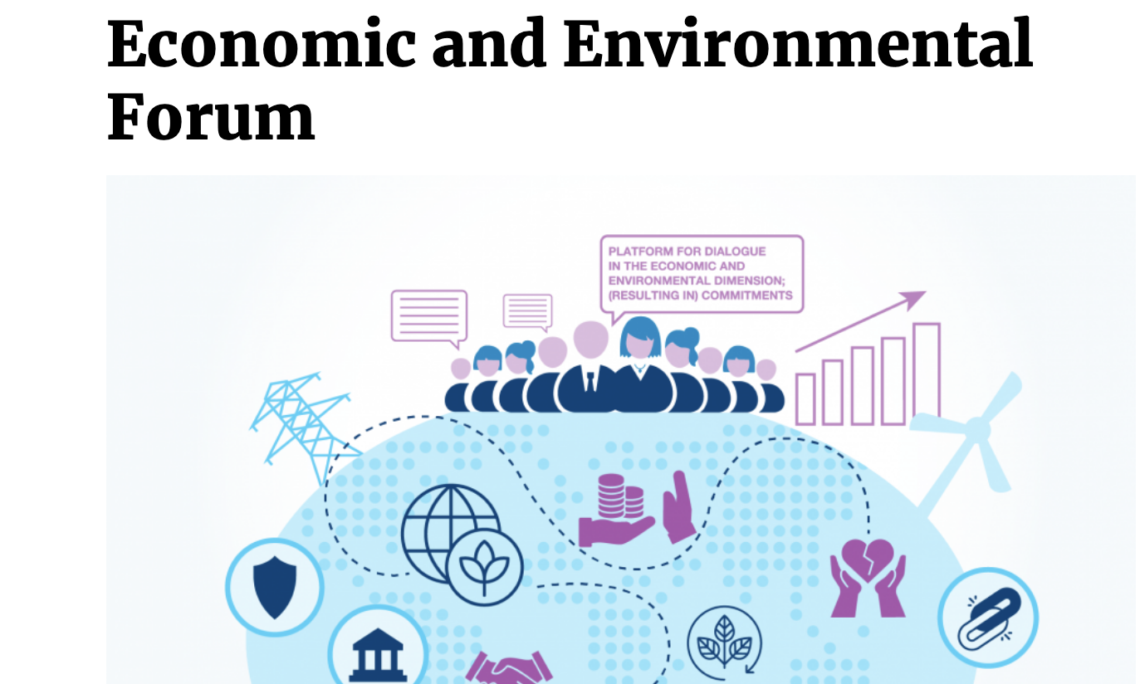 As prepared for delivery by Ambassador Michael Carpenter

at the 30th Economic and Environmental Forum
September 8, 2022

I’d like to commend the Chair, Ambassador Hasani, Ambassador Raunig, Ambassador Fages, Mr. Pons, and Dr. Frobarth for this session reflecting on the role of the EEF in advancing cooperation in the Second Dimension.  It is a timely conversation given the challenges we face today regarding the very basic questions of peace and security in the OSCE region.

Since 1992, the OSCE has convened substantive policy discssions on Second Dimension issues that all participating States agreed were important to promoting our shared values and commitments.  Over the past thirty years, we have seen both a broadening and deepening of the issues raised in this forum, whether initially when it was called the OSCE Economic Forum or, from 2006 onward, in the Economic and Environmental Forum.  We have also seen how the Organization has used these venues to adapt to the evolving global context and address the most pressing issues of our times.

The 1990s and the end of the Cold War brought a needed emphasis on economic development, trade and transport harmonization, industrial and scientific cooperation, and infrastructure.  The 2000s saw a focus on the contributions of energy security and diversification, transnational threats, good governance, migration, resource management, and environmental responsibility to security.  And in the past decade, we have seen yet other issues come to the forefront of the Second Dimension’s agenda, including:  the empowerment of women and youth; combating corruption; disaster risk reduction; human capital development; digitalization; and most recently, combating the potential security implications of climate change.

I recall this historical record to highlight our view that the OSCE must evolve again today to address the critical issues that directly challenge the core values of this Organization.

Russia’s brutal war against Ukraine has destabilized the security of the OSCE region like no other development since this Organization’s founding.  It is quite simply a wholesale repudiation of the region – and the world’s – security order, resulting in an ever-increasing toll of death and destruction, shocking brutality, and mounting human, economic, and environmental costs.

We therefore applaud the Polish Chair for its commitment since February 24 to using the 2022 EEF cycle as a platform to shine a light on Russia’s aggression against Ukraine and the human suffering and devastation caused by it.  As long as this war continues, Russia should be held to account for its inhumane and reckless behavior in all OSCE venues, including this one.  Simply ignoring the carnage, death, and destruction taking place today in favor of maintaining some veneer of “nonpolitical dialogue” on narrow issues would be to accept the fiction that these events are somehow disconnected from the world around us. More importantly, today, accepting this fiction would only enable and amplify Russia’s deliberate narrative of deflection, distortion and disinformation.

Similarly, we believe it is incumbent upon all Executive Structures of the OSCE to adapt their activities in response to the current, urgent security situation caused by Russia’s war against Ukraine.  At its inception in 1997, the Office of the Coordinator for Economic and Environmental Activities was tasked in its mandate with acting “in accordance with the OSCE’s flexible approach in responding to tensions and crisis situations as they emerge and evolve.”  For the past 25 years, the Office has diligently executed this mandate by strengthening the ability of participating States to address the economic and environmental aspects of security in different and creative ways to support the implementation of our expanding body of consensus-based commitments.

Today should be no exception to this legacy.  For the OSCE to succeed in meeting contemporary challenges in the Second Dimension, the OCEEA must continue to creatively adapt to new circumstances.  We therefore strongly support and applaud the leadership Ambassador Hasani has shown in recent months in quickly developing new extrabudgetary projects designed to address the consequences of Russia’s aggression.  We encourage him and his team to continue to assess the immediate and long-term consequences of the war and explore how OCEEA can assist Ukraine and other affected participating States with addressing them.

We are witnessing widespread damage to energy infrastructure, civilian nuclear facilities, drinking water and wastewater systems, chemical plants, and mining facilities.  This poses significant risks to the public not only within Ukraine, but across Europe.  It threatens to increase pollution to air, soil, and water; release toxins and pathogens; harm biodiversity, including wildlife; and increase short-lived and longer-term greenhouse gas emissions.  Furthermore, critical and protected ecosystems including Ramsar sites, forests, and more than 20 nature and biosphere reserves and national parks have been damaged.  Essential infrastructure, including schools, universities, pharmacies, and hospitals have been damaged or destroyed.  In addition, as is well-documented, 14 million Ukrainian civilians have been forced to flee their homes as refugees or internally displaced persons.  There should be absolutely no doubt about what the relevance of this staggering scale of destruction is to the EEF cycle and OCEEA’s work.  We must remain focused on addressing the economic and environmental damage caused by Russia’s aggression – which violates the UN Charter and contravenes the OSCE’s foundational principles and our collective commitments in the Second Dimension

The United States is a steadfast advocate for the value of the EEF and Office of the Coordinator in advancing the OSCE’s comprehensive concept of security for all participating States.  You have our full assurance that we will remain so.