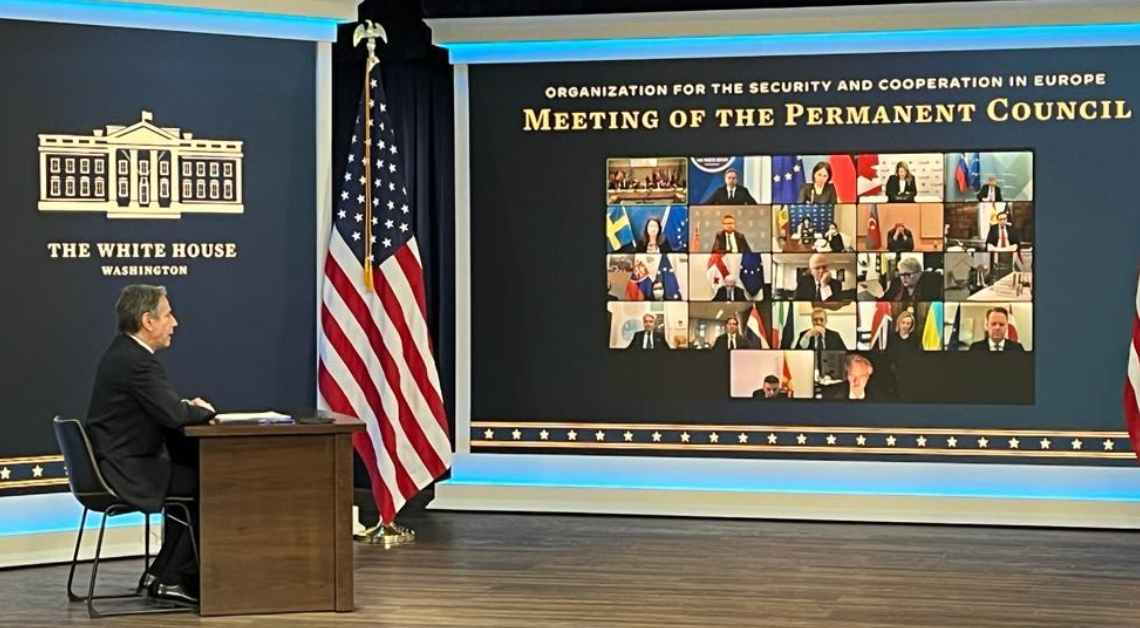 As delivered by Secretary of State Anthony J. Blinken

to the Permanent Council, Vienna
February 24, 2022

As we first said last night as the assault began, the United States strongly and unequivocally condemns Russia’s premeditated, unprovoked, and unjustified attack on Ukraine.

By attacking Ukraine, Russia has broken sacred principles of international law. It has violated the UN Charter. It has rejected the Helsinki Final Act and the principles upon which the Organization for Security and Cooperation in Europe was founded. It has shattered peace in Europe. And it has jeopardized the lives and safety of millions of Ukrainians who have done nothing – absolutely nothing – to provoke this horrifying assault on their homes and families.

Russia’s actions are an affront to democracy, to human rights, to human decency.  The world will hold Russia accountable.  And we will hold Belarus accountable for the role it is playing in this invasion.

As we meet, Russia’s forces are attacking Ukraine on several fronts. All evidence suggests that Russia intends to encircle and threaten Kyiv, and we believe Moscow has developed plans to inflict widespread human rights abuses – and potentially worse – on the Ukrainian people.

For months, the United States and our Allies and partners have pursued a diplomatic solution and repeatedly reached out to Russia in good faith to discuss any legitimate security concerns. For months, this Organization made every effort to offer Russia a path to discuss steps to enhance collective European security. For months, Russia has engaged in the pretense of diplomacy while insisting that they had no intentions of invading Ukraine. All the while, the Kremlin has been preparing this cold-blooded attack, the scale of which has not been seen in Europe since the Second World War.

The members of this Organization and the entire international community now plainly see Russia’s complete abandonment and abdication of the commitments it made to the world – and we will never forget.

President Putin seeks to eliminate Ukraine’s right to exist as a free and independent country and its citizens’ right to choose their own leaders, alliances, and futures. You don’t need to take our word for it; President Putin made that clear in his remarks to the Russian people. That makes Russia’s actions a threat not only to Ukraine’s security or to Europe’s security, but to the security of people everywhere who are protected by the international laws and principles that President Putin is breaking asunder today.

In this moment, we must and will remain united in support of Ukraine’s sovereignty and territorial integrity and the right of all sovereign nations to choose their own paths, free from coercion, subversion, or invasion.

We remind Russia in this solemn moment of its obligations to ensure the safety of all civilians, including all the people of Ukraine and the members of the OSCE’s Special Monitoring Mission – citizens of more than 40 participating States of this Organization. We will hold Russia accountable for its failure to do so.

We said from the beginning of this crisis that the United States will respond swiftly and decisively to further aggression against Ukraine. That response is underway. Earlier today, President Biden met with his G7 counterparts to discuss next steps. Later today, he will speak to the American people to announce additional consequences – which will be unprecedented in scope and scale – that the United States and our Allies and partners will impose on Russia for its attack on Ukraine and assault on global peace and security. We will also speak to measures that the United States and NATO will take to reassure our Allies on the Alliance’s Eastern Flank.

The United States continues to believe that the diplomatic path is the only way for responsible nations to seek to resolve their concerns. As we have always done, we are prepared to leave no diplomatic stone unturned. But Russia has made clear its complete rejection of any and all diplomacy, and until it reverses its course, our focus will be on coordinating with Allies and partners on imposing the consequences and costs Russia has brought on itself.

The American people – and freedom-loving people everywhere – stand with the people of Ukraine today, whose lives and futures are now in peril because of one man’s war of choice.

I request this statement be attached to the Journal of the Day.