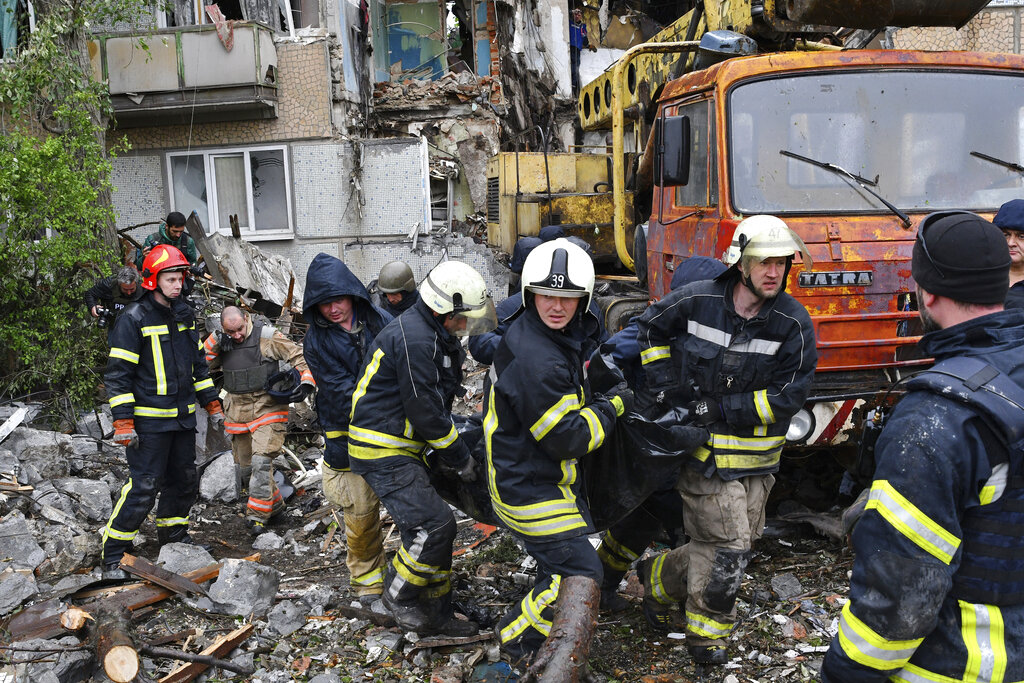 Rescuers carry the body of a civilian at a site of an apartment building destroyed by Russian shelling in Bakhmut, Donetsk region, Ukraine, Wednesday, May 18, 2022. (AP Photo/Andriy Andriyenko)

I would like to thank the Mayor of Okhtyrka for joining us today and sharing with the Council the inspiring but heartbreaking story of his city’s bravery in the face of Russia’s brutal onslaught against Ukraine.  The fact that Okhtyrka has emerged victorious after months of bombardment is a testament to the courage, resolve and resilience of its people, but this victory has been won at an enormous cost.  I cannot even begin to imagine what you have been through, as a citizen, as a mayor, and not least, as a surgeon, who has personally operated on so many of the victims of Russia’s aggression and witnessed firsthand the terrible suffering caused by this war of choice.

While Okhtyrka has repelled the aggressor, Russia’s forces continue to destroy even as they flee.  It is rather incredible that just two days ago Russia’s forces again struck the Kazka kindergarten, the same facility they hit on February 25, killing at least one child.  The train station, city hall, and countless other buildings that survived the ravages of World War II now lie in ruins.  Despite the immense suffering and destruction endured by Okhtyrka, the mayor and his neighbors never gave up.  Okhtyrka, like Ukraine as a whole, is a reminder that freedom can be won back, and that over time the invaders will be driven out from Ukraine’s territory – for good.  We must help you achieve that aim.  Those of us around this table who support freedom and human decency – which, sadly, is not all of us – must support Ukraine in defending against this cruel and barbaric invasion.  Speaking for my own country, the United States, we are committed to providing Ukraine with the arms and equipment it needs to defend itself and ultimately win this war.

We also stand in awe of the brave resistance of the heroes of Mariupol’s Azovstal steelworks, who held out for 82 days against Russia’s brutal and relentless attacks on their city.  The ferocious will of Ukraine’s forces to fight stands in sharp contrast to plummeting morale and indiscipline among Russia’s forces.  What Russia has done to Mariupol is heartbreaking.  Some of the most chilling accounts of likely war crimes have come from there.

Mr. Chair, earlier this week at the second Supplementary Human Dimension Meeting we also heard a very moving plea to save a human life in Ukraine.  Like my Ukrainian colleague, I would like to raise the case of Vladislav Buryak, a 16-year-old Ukrainian boy who, as we have just heard, has been kidnapped by Russia’s forces – for the sole reason that his father, Oleg, heads the Zaporizhiya military administration.  Vladislav stayed in Melitopol during the war to care for his grandfather, who was fighting cancer.  After his grandfather passed away on April 8, Vladislav reluctantly agreed to evacuate the city.  However, when stopped at a checkpoint, Russia’s soldiers realized Vladislav is the son of a Ukrainian government official and kidnapped him.  Today marks 41 days that Vladislav has been held in Russia’s custody.

We call for the immediate release of this 16-year-old boy and remind Russia of its obligations under international humanitarian law, including the fundamental guarantees for all those detained and the requirement to treat such persons humanely.

Mr. Chair, this war has such enormous consequences for individuals and families, for entire cities on the frontlines, for all of Ukraine, and indeed for all of the world.  I would like to spend some time now addressing the wider, global consequences of Russia’s war on Ukraine.  Over these last few weeks, it has become apparent that tens of millions of the world’s most vulnerable people are at increasing risk of acute food insecurity – all because of Vladimir Putin’s war of choice against Ukraine.  A war that was unprovoked, unnecessary, and illegitimate.

As the fifth largest exporter of wheat, fourth largest exporter of corn, and the largest exporter of sunflower oil to the world, Ukraine plays an essential role in keeping the world fed.  Even before Russia’s full-scale invasion of Ukraine, 2022 was forecast to be the most food insecure year on record globally, making supply from Ukraine even more critical.  Then, on February 24, Russia launched its vicious and unprovoked war.

Over the last 12 weeks, the Russian Federation has shown the same contempt for the world’s hungry and vulnerable as it has for the thousands of innocent Ukrainians killed by its aggression.  Russia’s forces have repeatedly struck Ukrainian grain storage facilities.  The Ukrainian government reports that Russia’s forces have stolen 400,000 tons of Ukrainian wheat as well as farm equipment, including sowers and harvesters, which they shipped back to Russian territory.  Russia’s forces have destroyed roads, railways, and rail stations needed to transport agricultural products for export.  And Russia continues to blockade and shell ships and seaports along Ukraine’s Black Sea coast, from where nearly all of Ukraine’s grain is exported.  In other words, the Russian Federation is preventing Ukraine’s critical food exports from reaching the dinner plates of hungry families around the world.

Mr. Chair, as a result of Russia’s aggression, global food shortages are increasing and food prices are rising, exacerbating suffering and hardship for millions of vulnerable people across the globe.  The World Food Program estimates that Russia’s war on Ukraine could drive 47 million additional people worldwide into acute food insecurity, an increase of 26 percent over pre-war projections.  Nearly 50 million people in Yemen, Ethiopia, South Sudan, and Syria alone are projected to face crisis levels of acute food insecurity this year.  The sheer human cost of Russia’s aggression is staggering in its enormity.

The United States is working with key partners – including the G7, the European Union, multilateral development banks, the World Food Program, and the UN Food and Agriculture Organization – to mitigate the harm on those most affected by Russia’s destructive actions – in most cases the world’s poorest and most vulnerable.  Just yesterday, in New York, Secretary Blinken hosted a ministerial-level conference of more than 30 countries, including those most affected by food insecurity, to mobilize action to strengthen global food resilience and security.  Secretary Blinken reiterated the United States’ pledge to providing more than $11 billion over the next five years to address food security threats and nutrition needs across the globe, subject to Congressional appropriation.  This pledge is in addition to the over $4 billion in humanitarian assistance funding, signed into law in March of this year, for Ukraine and its neighbors as well as other vulnerable communities across the world.

The United States is also calling on countries with food stockpiles to donate to UN humanitarian organizations to help mitigate the disruptions in the food supply caused by Russia, and we are conducting extensive diplomacy to encourage countries to refrain from unjustified export restrictions and excessive stockpiling.  At the same time, we are continuing programming through our longstanding food security initiatives like Feed the Future.