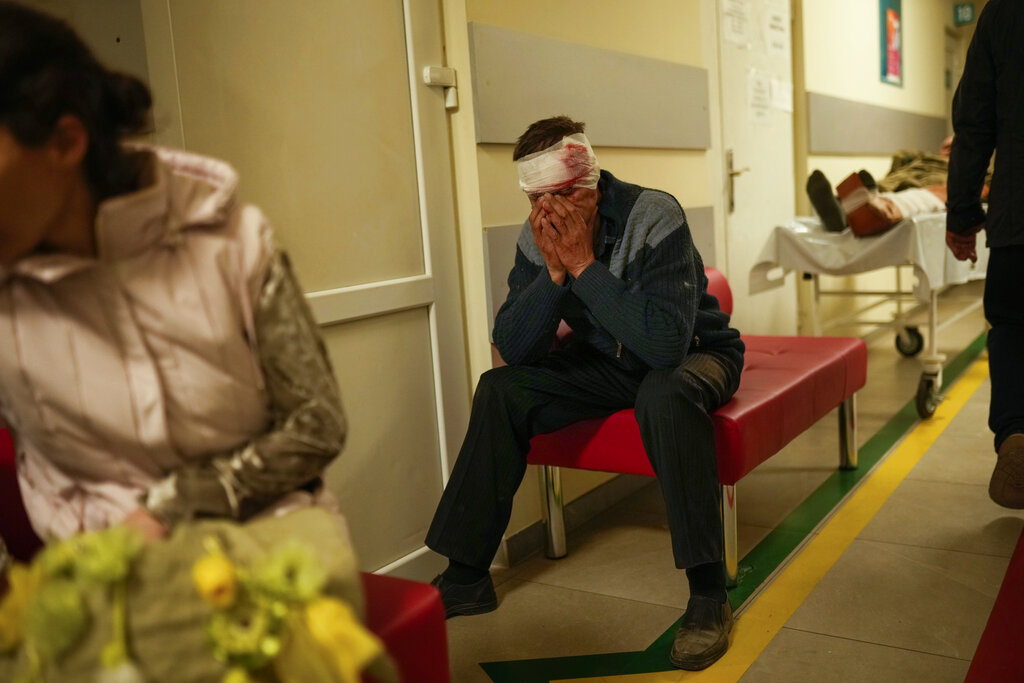 A local resident injured in a Russian strike rests in a hospital in Pokrovsk, eastern Ukraine. (AP Photo/Francisco Seco)

Mr. Chair, on Tuesday we marked a grim milestone: three months of Russia’s brutal assault against Ukraine. The sheer barbarity, sadistic cruelty, and lawlessness of Russia’s military campaign is now plain for all the world to see.  Russia’s war aims were rather articulately described by one of its own diplomats earlier this week when he said that: “Those who conceived this war want only one thing — to remain in power forever, live in pompous tasteless palaces, sail on yachts comparable in tonnage and cost to the entire Russian Navy, enjoying unlimited power and complete impunity.”

Mr. Chair, I think we all know what would happen if Russia were to achieve “success” in Ukraine.  Russian diplomats know it too.  There would be more horrific reports from filtration camps, more forcibly displaced people, more summary executions, more torture, more rape, and more looting. There would be many more damaged or destroyed cultural objects, hospitals, schools, and apartment buildings.  More death and destruction.  And, at the very end of this scorched earth campaign, Russia would contrive an argument to justify the annexation of a depopulated territory and an utterly traumatized and terrorized population surviving in the wake of its tsunami of violence. Perhaps the Kremlin would then engineer a sham referendum on these territories, as we have warned previously in this Council, or perhaps it would simply instruct one of its puppets to petition Moscow directly for annexation.  The end result would be the same, in either case.

Mr. Chair, Russia’s attack on Ukraine is not only an attack on the principles enshrined in the UN Charter, on all ten principles of the Helsinki Final Act, and the Geneva Conventions, but it is also a frontal attack on the most basic norms of human decency.  Sitting here at this table are Russia’s representatives, adorned in their tailored suits, starched shirts, and silk ties, trying their best to make “points of order” to protest against the discussion we are having right now, on the grounds that it is “biased” against them.

It is worth reminding them that Tanya Samodiy was not able to make a point of order when Russian forces passed through her village on March 14.  She could not say anything as she ran towards the village center and saw 10 Russian military vehicles on the road.  She could not lodge any diplomatic protest after she returned with her parents and saw three bodies on the ground:  her twin 17-year-old brothers Yevhen and Bohdan and their friend Valentin.  Imagine what Tanya was going through when she saw that half of Valentin’s head was gone and Yevhen had been shot in the chest.  She then saw that “Bohdan was wounded in the abdomen and still alive.  His mother and her partner drove him to the Chernihiv children’s hospital, but Bohdan died before they arrived.”  Did any members of her family ever get to express a point of order?

Or imagine the civilians detained by Russian forces in the basement of a Yahidne school. As one eyewitness described it:

“The room had no light.  We could only sit on small children’s chairs or narrow benches.  Our baby was sitting and sleeping on laps.  The air was filled with dust and the smell of lime from the walls…After a week everyone was coughing violently.  Almost all the children had high fevers, spasms from coughing, and would throw up.  We tried not to walk unnecessarily, because people were sitting so densely that it was only possible to move sideways.”  When did these people ever get to protest?

Pavlo Rudyk would surely have raised a point of order if he could have mustered the words as he sat blindfolded and handcuffed in the village of Dymer.  As he put it, “They told me it was over for me.  They put a rifle to my head, loaded it and I heard three shots.  I could hear the bullet casings falling on the ground too…They told me that they would not miss next time if I don’t tell them everything…. Second time they interrogated me, they used an electric shocker on me.  They shocked me on the back of my head.  It was very painful.”

Or what about the 25 girls and women aged 14 to 24 who were reported to have been systematically raped by Russian forces in the basement of a house in Bucha, nine of whom are now pregnant?  Were they given a chance to object?

Mr. Chair, the stark and ugly truth is that until Ukraine wins this war, Russia will never give up on using the most brutal methods to conquer Ukraine. We see this right now in Kherson, Donetsk, and Luhansk.  Local residents who try to escape Russia’s reign of fear and brutality risk abduction and forced deportation to Russia or Russia-held areas.  One man who attempted to leave Melitopol was reportedly captured by troops at a checkpoint, shot and beaten at a nearby base, and then moved to a prison colony in Donetsk.  After enduring those privations, he described how he was jailed in Russia’s Rostov region, where further beatings resulted in broken ribs.  The Russian authorities then moved him 400 miles deeper into Russia to Voronezh, where a tribunal sentenced him to 30 years in prison for war crimes. How about that?

Mr. Chair, the full extent of the war crimes in these regions will only become known once Ukraine expels the invaders, liberates Russia’s filtration camps, and when war crimes investigators can follow the mounting evidence emerging from Russia’s torture chambers.  As in the Kyiv and Kharkiv regions, a full accounting of the evidence of torture, rape, and summary executions by members of Russia’s forces can only come with Russia’s withdrawal.  Every day the Kremlin controls these territories, the victims of Russia’s atrocities multiply, and these atrocities become more and more regularized as a weapon of war.  As Veronika Bílková, one of the authors of the Moscow Mechanism report, recently said about sexual violence committed by Russia’s forces, “it seems that it has become much more systematic, so now we see it’s really a pattern of rape, of violence against women, and it seems there is a plan behind it.”

Mr. Chair, these are the stark realities of this war.  We cannot become numb to them as they are repeated over and over again.  There must be no sugar-coating these facts.  There is no “saving face” in these circumstances.  Russia’s gaining control of more pieces of Ukrainian territory only whets the Kremlin’s appetite for more land, and hence, results in more cruelty, more atrocities, and more destruction.  For as long as the Kremlin retains control of parts of Ukraine, it will use these territories as a springboard to launch additional attacks and conquer more terrain – leaving a growing wake of destruction and atrocities.

Colleagues, we again strongly urge all participating States in this Council to recognize these realities and provide Ukraine the support it needs right now to defend itself against Putin’s revanchist delusions.  Again, let me quote from one of Russia’s own diplomats: “The aggressive war unleashed by Putin against Ukraine, and in fact against the entire Western world, is not only a crime against the Ukrainian people, but also, perhaps, the most serious crime against the people of Russia.”  He is right.  And what we need, above all, is to stop further crimes from being committed and to seek accountability for those that have.