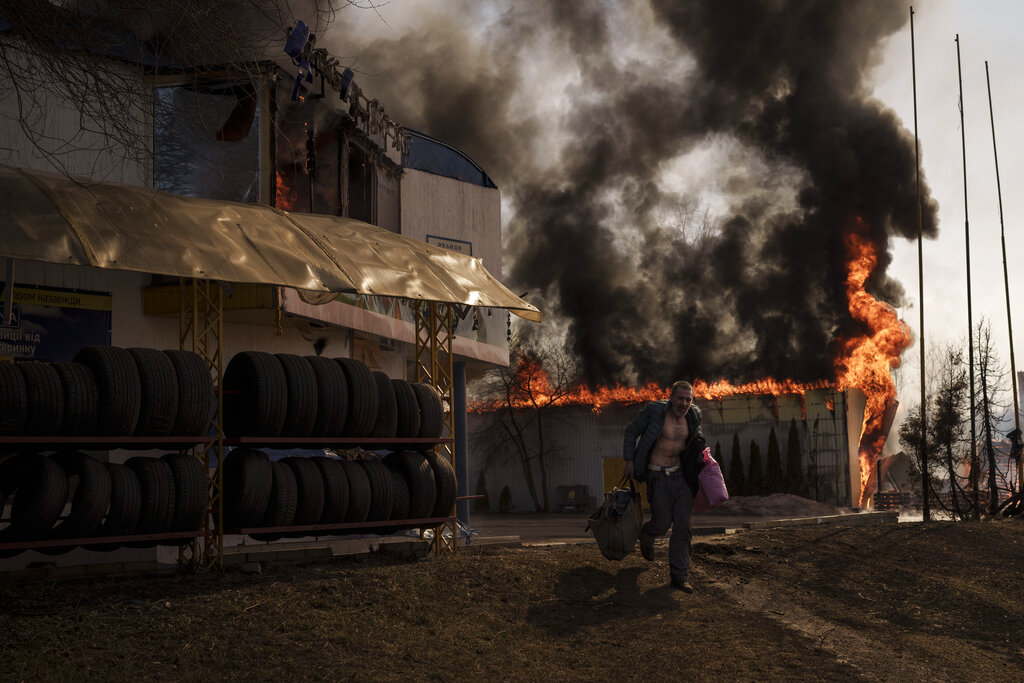 A man recovers items from a shop that caught fire from a Russian attack in Kharkiv, Ukraine. (AP Photo/Felipe Dana)

Fifteen weeks of brutality.  Fifteen weeks of atrocities.  Fifteen weeks of violence, with so many reports of executions, forced deportations, rapes, filtration camps, and destruction that it is becoming difficult to fully grasp the enormity of the carnage being perpetrated by the Russian Federation.  And after fifteen long weeks, there is still no end in sight to the horrors Russia has willfully unleashed on Ukraine’s civilian population.

Mr. Chair, Russia has many modern and sophisticated weapons of war: cruise missiles that hug the terrain for hundreds of miles until they strike their target with astonishing accuracy.  It has precision guided munitions that can be fired from the air, from sea, and from land.  So, why has this war been waged as if we were living in the Dark Ages?  Why have so many civilians been subjected to the horrors of war? These are questions worth asking.  Widespread reports of sexually-based violence, of threats to cut off genitalia, and strikes on maternity hospitals – these are not the elements of a modern military campaign designed to win “hearts and minds.”

However, if one wanted to create the conditions under which the peaceful, civilian population wanted to flee their own homes, the very places where many of them were born, learned to ride a bike, graduated from high school, got married, and raised their children – well, if one wanted these people to suddenly pack their belongings into a duffel bag and leave immediately, then savagery would suit the purpose.  If the Kremlin’s aim were to get rid of the local population and replace them with more loyal subjects, or those who do not dare to question the legitimacy of the occupation forces, then barbarity begins to make a whole lot more sense.

Russia’s horrific and stomach-turning campaign of destruction and horror is not random.  The sadistic atrocities and the very deliberate process of “filtration” may well serve a purpose. Particularly if that purpose was to negate the very concept of Ukrainian statehood in the areas that Russia currently controls so that these parts of Ukraine could be more easily absorbed into Russia.

The Russian Federation has now spent three months operationalizing this strategy in Kherson.  They have fast-tracked the issuance of Russian passports to Ukrainian citizens, removed legitimate, democratically-elected Ukrainian officials, and forced residents to adopt the Russian ruble over the Ukrainian currency. As of late April, we estimate that Russia likely controlled at least 25 broadcasting towers in Ukrainian areas under Russian military control, enabling it to air pro-Russian media channels. Russia’s politicians do not hide their aims.  A member of the Russian Federation Council was quoted yesterday, just yesterday, as saying he thinks “all the territories controlled by Russia have a very good chance of being reunited with the Russian Federation.”

Ukrainian officials estimate that half the population of the Kherson region has now fled the desperate humanitarian conditions and savagery of Russia’s forces.

The horrors of daily life in Kherson emerge in account after account of those who have escaped.  Oksana, an escapee, described what life was like:  “Each day, from around 3pm, the streets would empty out when soldiers started patrolling.  People hid in their houses to avoid being shot.  Riding their vehicles around with their machine guns, they could be drunk sometimes and just start firing.  So it was quite dangerous wandering around in the evening.”

Sergey and his family also escaped, recounting that nobody in Kherson was ever truly safe.  “There are special passes they have implemented: if they don’t like you, they can take you away.”  Mariya also fled Kherson, describing how she and other residents “constantly lived in fear:  There are many roadblocks around the city.  They check passports and phones, especially for men.”  Another resident, Ruslan, recalled that he seldom left his house “because they check documents, check phones.  If they find something, you can get penned up in the basements.  And they have some lists.”  Lists of those they seek to detain and interrogate. Those who are taken speak of sadistic treatment by Russia’s forces, as described in horrifying detail in this very Council by Oleh Baturin, who described eight days of torture after his abduction by Russia’s soldiers that left him with four broken ribs.

Widespread reports of rape by Russia’s soldiers in the Kherson region have also emerged.  Among them is the story of 16-year-old Dasha, who was six months pregnant and sheltering in her home basement with her family in a small village in the Kherson region in mid-March when a Russian soldier entered and raped her.

Mr. Chair, as they try to survive life under a foreign invading force that so evidently rapes, shoots, tortures, and abducts members of the local population, those who remain in Kherson face a rapidly deteriorating humanitarian situation.  Food and medicine have become scarce after Russia seized grain from local farmers so it could be sent to Russia or exported for profit abroad. Russia has not only continuously refused to open humanitarian corridors into Kherson to relieve the shortage of food and medicine; its soldiers are reportedly seizing any aid that makes its way to the city.  One escapee recalled, “Volunteers started trying to deliver medicine to Kherson.  One shipment was worth $7,000 — and the Russians simply stole this cargo.”

Pillaging a land of its resources until the local population has no option but to flee is another medieval tactic.  The Kremlin has ensured that those who leave have no choice but to travel to territory controlled by Russia.  Local residents are left with a horrifying decision:  stay and continue to endure terror, repression, disease, and hunger at the hands of Russia, or leave for a different Russia-controlled territory via numerous Russia-controlled checkpoints and filtration camps, where they risk abduction and forced deportation.

Mr. Chair, as President Biden said, “It’s become clearer and clearer that Putin is just trying to wipe out the idea of being Ukrainian.  The evidence is mounting.”  It is critical that we continue to expose and document for future accountability Russia’s atrocities that may be aimed at destroying Ukrainian identity and culture in Kherson and other parts of Ukraine.  It is critical that we invoke the Moscow Mechanism again, to establish the facts and circumstances of these atrocities and to examine whether Russia is in fact committing crimes against humanity.  It is critical that we bear witness to the suffering of the people of Ukraine.  And there must be no impunity for those carrying out this campaign of savagery across Ukraine.