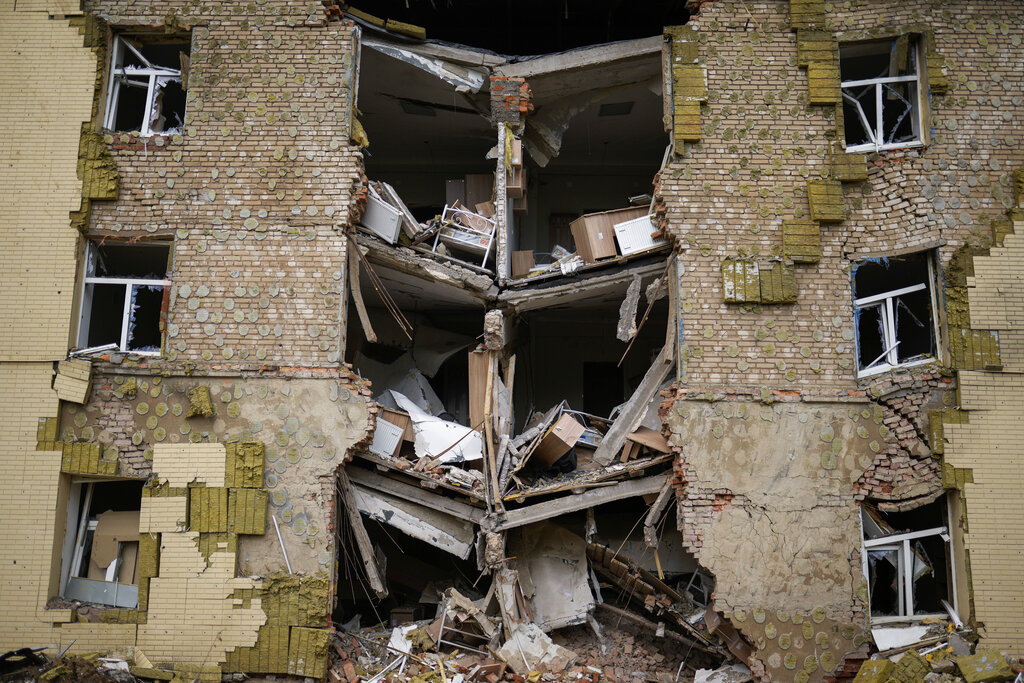 First of all, I would like to thank Oleksandr Samoilenko, the Chairman of the Kherson Oblast Council, for joining us here today to share the stories of heroism displayed by the residents of Kherson as they resist the Kremlin’s attempts to institutionalize a reign of horror and brutality in their native land.  The unimaginable suffering of the men, women, and children of Kherson at the hands of Russia’s forces starkly illustrates the existential stakes of this war.

Chairman Samoilenko, the United States stands with the people of Kherson during these dark days, and we will continue to lead the world in providing Ukraine with both the weapons and humanitarian assistance needed to defend against Russia’s horrific onslaught, including through our historic Lend Lease Act.  We will also continue to rally our allies and partners to provide the same.  Brave patriots are fighting a struggle for their very survival as we speak.  Only liberation from this tyrannical regime will bring them peace and freedom.  No sham referendum or proxy petition for annexation will ever legitimize their suffering.  And the international community will never recognize such illegitimate processes anyhow.

After more than 100 days of war, everyone in this Council is aware of the atrocities, including war crimes, committed by members of Russia’s forces.  Everyone here knows that Bucha and Borodyanka and Mariupol and Kherson will go down in history as the sites of unspeakable war crimes.  Everyone in this Council understands that the Russian delegation lies in such a brazen way that their claims would be laughable if they were not so vile.  The Russian ambassador must really take us all for fools if he expects anyone to buy his cheap propaganda that Ukrainians are somehow bombing their own cities, destroying their own schools and hospitals, and raping their own population.  Fortunately, the truth is being documented by many NGOs and international organizations, including the OSCE experts who will lead the next Fact Finding Mission to Ukraine.   The crimes they uncover must and will be prosecuted to the full extent of the law.

Mr. Chair, we need look no further than Russia’s former head of state to understand Russia’s true aims in this conflict. He says, and I quote: “I hate them.  They are bastards and scum…And as long as I’m alive, I’ll do anything to make them disappear.”  Let me repeat that: I’ll do anything to make them disappear.  There you have it.  The most succinct articulation of Russian policy that we have heard to date.

Mr. Chair, the people of Kherson, as well as other regions of Ukraine overrun by Russia’s forces, risk their lives every day to bring the world the truth of Russia’s barbarity.  According to the Ukrainian president’s representative for Crimea, Tamila Tasheva, about 600 people, as has been referenced, are detained in the Kherson region in specially equipped basements serving as torture chambers.  We even have reports of their locations:  for example, at the Kherson oblast administration building, or at school number 17 in Henichesk.  As Ms. Tasheva put it, people are being “detained in inhuman conditions and are victims of torture.”  Those being held are “mainly journalists and activists” who organized “pro-Ukrainian rallies in Kherson and its region.”

The Kremlin’s pre-planned, multi-faceted campaign to absorb Kherson lays bare the truth of its vision of a subjugated, Russified Ukraine.  Kherson is the Kremlin’s laboratory of horrors.  Every day Kherson remains under Russia’s control, the Kremlin works to further its plan to replace Kherson’s democratic government, free press, and civil society with a Kremlin-style police state that humiliates and brutalizes the local population, abuses their human rights, and abducts, tortures, and/or kills those the Kremlin deems dispensable.  In their place, Russia seeks to install puppets or proxies, much as it has done in Donetsk and Luhansk.  To cite but one of many examples, Kherson city’s mayor was recently replaced by Russian forces with a Russian sympathizer from neighboring Zaporizhya.  We also assess that Russian intelligence has tried to recruit local political figures and activists, using coercion and blackmail tactics that has sometimes included unlawful imprisonment, threats of kidnappings of relatives, and bribery.

The Russian government is deliberately seeking to sabotage internet access in Russian controlled territories to deny people the ability to acquire reliable information, conduct financial transactions, communicate openly, and access Ukrainian government services.  And we also know that residents in Kherson and elsewhere are reportedly subjected to “filtration” by Russian forces.  The “filtration” process can involve several days of detention and interrogation by Russian military and security forces before Russian forces determine whom to kill, torture, detain indefinitely, or forcibly deport to Russia.

Every day that Kherson suffers under the barbaric cruelty of Russia’s forces, the Kremlin advances the plans that former President and Prime Minister Medvedev so plainly articulated.  The language used by Russia’s representatives, including those in this Council, clearly match the actions of Russia’s forces on the ground.  Indeed, the word “Nazi” in Russian official parlance simply means any Ukrainian who does not support Russia’s war against Ukraine.  “De-nazification” is therefore synonymous with making Ukrainian citizens who do not support Russia’s war against their country disappear.  Quite literally.

Mr. Chair, we need look no further than Crimea or the so-called Luhansk and Donetsk People’s Republics to see what Russia intends for Kherson and other areas of Ukraine that it hopes one day to control.  The Kremlin will stop at nothing – its bombardments continue to devastate schools, kindergartens, and hospitals.  It seeks to destroy Ukraine’s vibrant self-governance institutions, such as those represented by Chairman Samoilenko.  Nor will Russia shy away from extending a brutal tyranny over the territories it controls.  And with every passing day, Russia exacerbates the humanitarian catastrophe in these regions by blocking escape routes to government-controlled areas, leaving residents no choice but to remain under siege-like conditions, or be forcibly relocated to Russia.  Russian forces have deliberately destroyed key bridges linking Kherson with the rest of Ukraine.  Locals are forced to use the Russian ruble, to teach in schools using the Russian Federation curriculum, and to register their commercial properties with the new puppet administrations.  Russian President Vladimir Putin recently issued a decree establishing an expedited process for Kherson residents to apply for and receive Russian citizenship. Everywhere that Ukrainian identity is perceived as a threat to Russia’s tyranny, it is ruthlessly quashed.  We have seen enough to know where this eventually leads.

Mr. Chair, Kherson is an economically vital region for Ukraine.  If the Kremlin is allowed to achieve its goals in Kherson, it will not only have a launchpad for further attacks on Ukraine’s interior and its Black Sea littoral, but it will be in a position to slowly strangle Ukraine’s economy.  Control over Kherson helps Russia prevent Ukraine from exporting its grain and directly exacerbates the global food security crisis.  It means not only will more people in Ukraine likely die, but more people will become hungry and die of hunger worldwide.  The stakes are enormous.

But not just the strategic stakes.  Also, the personal stakes.  The stakes for ordinary people like Olexander Guz, who described being hung by his wrists and beaten to the point of unconsciousness by Russia’s soldiers in Kherson.  The stakes for those who were treated at a Kherson hospital by a doctor who described “signs of bodily mutilation,” including “cut marks, signs of electrocution, traces of binding on the hands and strangulation marks on the neck.”  The stakes for the survivors of reported torture chambers who described having two wires from a car battery attached to their groin and “told to stand on a wet rag.”  And the stakes for a country whose social fabric has been ripped apart and will need generations to heal and repair.

Mr. Chair, let us never forget these truths.  Let us never forget who is seeking to rob others of their human dignity, who is seeking to humiliate whom.  The United States will continue to support a sovereign, independent, democratic Ukraine with its territorial integrity intact.  Let there be no doubt:  Kherson will eventually be liberated, and its people will rebuild their vibrant democratic society.  Eventually, Kherson’s reported torture chambers and bombed-out buildings will house museums against occupation and dictatorship – monuments that serve as a memorial for those who have perished and serve as a warning against the feverish dreams of tyrants.  And those responsible for war crimes and other atrocities in Kherson and all other areas of Ukraine that have suffered under the temporary control of Russia’s forces will be held accountable and brought to justice.