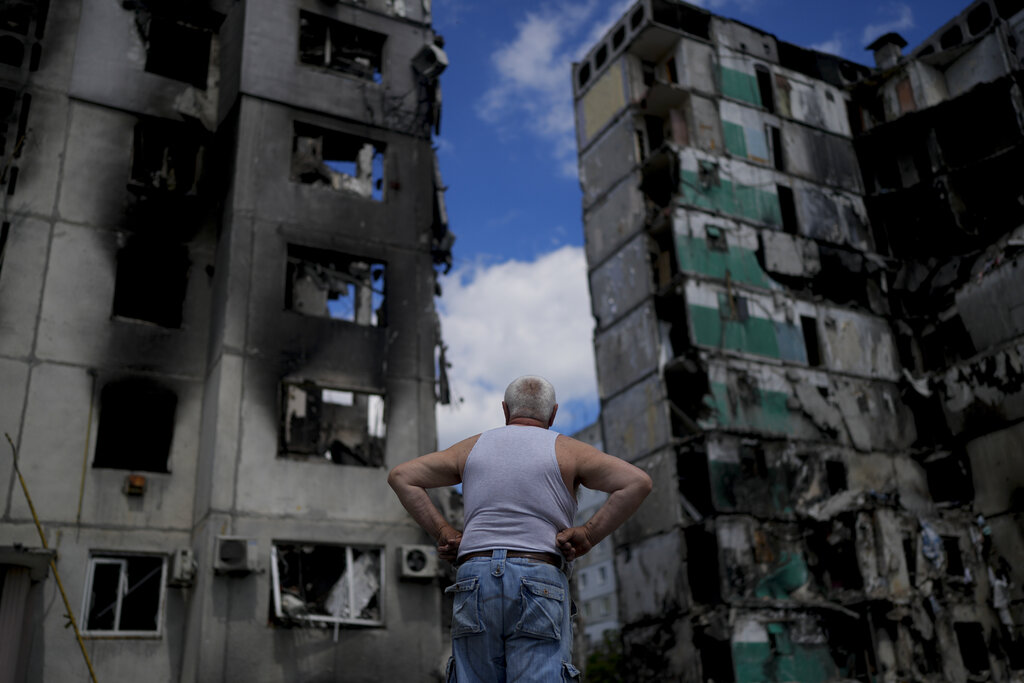 A man looks at buildings destroyed during Russian attacks on Borodyanka on the outskirts of Kyiv, Ukraine. (AP Photo/Natacha Pisarenko)

Mr. Chair, after so many months of war, after so many reports of civilians executed and dumped into mass graves, of detainees tortured with electroshocks, of women raped in front of their families, and of children killed in front of their parents, there is a risk that some in the international community – and perhaps even some in this Council – will become numb to these tragedies. We cannot allow that to happen.  The specter of imperialism has reared its ugly head in this third decade of the 21st century.  One participating State is trying to change borders by force, to annex additional territory by military conquest. We cannot allow this effort to succeed: both because what is happening in Ukraine is an affront to human decency, and also because it is an attempt to upend the bedrock principle that countries cannot change borders through violence.

To that end, the United States has announced yesterday an additional $1 billion in security assistance for Ukraine.  And I can assure you, we are committed to continuing this support.

It is worth recalling that, for President Vladimir Putin, the greatest tragedy of the last century was not the Holocaust or the Holodomor or the ravages of two world wars.  Rather, it was the collapse of the Soviet empire – and yes, that empire was evil – cruel to its own people and a threat to international peace and security.  No one knows exactly how far the Kremlin will now try to go to recreate an empire, but we must not fool ourselves – certainly not after the events of 2008 and 2014 – into believing that this war is only about the fate of Ukraine.  Colleagues, this war is about the fate of the international order.  The Kremlin’s aim has been crystal clear: its dream of annexing Ukraine’s territory has been articulated consistently, time and again.

On June 9, President Putin noted that “There is no in-between, no intermediate state: either a country is sovereign, or it is a colony, no matter what the colonies are called.  And a colony has no historical prospects.” Now, let us recall that Russia’s former president and current deputy security council chairman has already tried to claim that Ukraine has no historical prospects. As he put it: “the very essence of Ukrainianness, fed by anti-Russian venom and lies about its identity, is one big sham.” Just this past Tuesday, Russia’s former ambassador to NATO and current senior government official called Ukraine an “existential threat.”  I quote: “If we do not put an end to them, as unfortunately, our grandfathers did not do away with them, we will have to die, but end up at an even greater cost to our grandchildren…So let’s get this over with. Once and forever.”

Add to this the introduction of a draft law in the Russian State Duma earlier this week that threatens to withdraw the recognition of the independence of the Baltic states.  And the Baltic states are certainly not the only ones to feel this threat.  How many countries has the Kremlin threatened by calling them artificial or unnatural creations?

As the author Ryszard Kapuściński noted in his essay Imperium: “boundless are the cemeteries of the audacious who attempted to expand their borders.  It is safe to assume that half of those who have ever walked upon our planet and lost their lives in the field of glory gave up the ghost in battles begun over a question of borders.”  And so it is today.

In the Kremlin’s quest to realize its revanchist aims, President Putin and his forces violate international humanitarian law, including the Geneva Conventions.  The wholesale destruction of entire Ukrainian towns, cities, livelihoods, and the forced relocations of over a million Ukrainian citizens to Russia, as the Ukrainian government has estimated, leave little doubt that this war is a zero-sum contest for Ukraine’s survival.

Mr. Chair, the only thing standing between the Kremlin and its imperial delusions of domination is the remarkable resolve and bravery of Ukraine’s government, armed forces, and civilian population.  And standing together with Ukraine in complete solidarity is the global coalition of countries equipping it with the security, economic, and humanitarian assistance it requires to address the suffering of its people and defend its sovereignty, independence, and territorial integrity from the Kremlin’s war of conquest.

We have all seen again and again the reports of war crimes and gross abuses of human rights committed by members of Russia’s forces in Ukrainian territory.  We have seen repeatedly in every area that falls under Russia’s control reports of executions, rape, and torture.  And in areas of Ukraine where Russia’s forces remain, we further see the Kremlin implementing a pre-planned, multi-faceted effort to forcibly Russify parts of Ukraine’s territory, including depopulation achieved through forced relocations of Ukrainian citizens using filtration camps in preparation for future purported annexation.

Mr. Chair, we know precisely what Russia intends for any territory of Ukraine over which it seizes control.  We also know that the Kremlin will continue to resort to the most vicious tactics to seize ever more territory.  In February, March, and April, Russia’s leadership believed it had a chance of conquering Kharkiv, Ukraine’s second largest city, for eventual absorption into Russia.  As documented in explicit detail in an Amnesty International report, for two months Russia’s relentless bombardments hit Kharkiv’s residential neighborhoods with massive artillery fire and missile strikes, causing widespread destruction and horrific civilian casualties.  Russia’s forces ensured that no refuge remained for those trapped.

Ivan Litvynyenko was in a Kharkiv playground with his daughter and wife Oksana when a missile rained down out of nowhere.  He recounted, “When my daughter saw her mom on the ground in a pool of blood, she said to me ‘let’s go home; mom is dead and the people are dead.’”  Oksana held on for another two months, before dying this past Saturday.  Olha Sadovka recalls of the same attack, “There was a ping pong table, with boys playing ping pong.  We sat down on a bench.  Within seconds, there was an explosion.  All the boys playing ping pong fell.”  Olena Sorokina, a cancer survivor, was waiting outside her building for a humanitarian aid delivery when a shell exploded.  Olena lost both legs.  Conveying just one among thousands of human tragedies brought on by one autocrat’s dreams of imperial conquest, she said, “After the battle with cancer, now I have to face another battle to learn to function without legs.”  In the same attack, seven civilians were killed and more than 30 injured.  Tetiana, another resident of the building, said, “It was carnage. I will never forget that day.”

Mr. Chair, Russia’s relentless bombardment of Kharkiv ripped civilians apart in their homes and in the streets, in playgrounds and in schools, in cemeteries and in parks, while lining up for humanitarian aid and while shopping for food.  Over 600 civilians were killed and 1,200 wounded during Russia’s two months of brutality, according to the local government.  Six hundred residential buildings were destroyed.  The vast majority of these attacks hit civilian objects of no military value – unless, that is, Russia puts value in brutalizing a civilian population into fleeing.  Indeed, Kharkiv Governor Oleh Syniehubov reported in late May that more than half the city’s population had been forcibly displaced.

Amnesty International concluded that Russia’s repeated bombardments of Kharkiv constitute war crimes, and Russia’s forces have similarly undertaken relentless bombardments of other major population centers, to include Mariupol, and now Sievierodonetsk.  The destruction of these cities crystallizes how the Kremlin seeks to achieve its vision of absorbing Ukraine into Russia – by means of erasing Ukraine’s sovereign statehood and the forced removal of civilians.

Mr. Chair, we should never forget that the people of Ukraine are fighting for the survival of their country, of their families, of their cultural identity, and of their communities, while Russia’s forces are fighting for President Putin’s fervid fantasy of imperial domination.  The world has spent the last 80 years trying to reckon with the horrors of colonialism, with those who sought to invade and colonize other countries.  The participating States of the OSCE and the entire international community must reject this vision, and they must do so decisively.