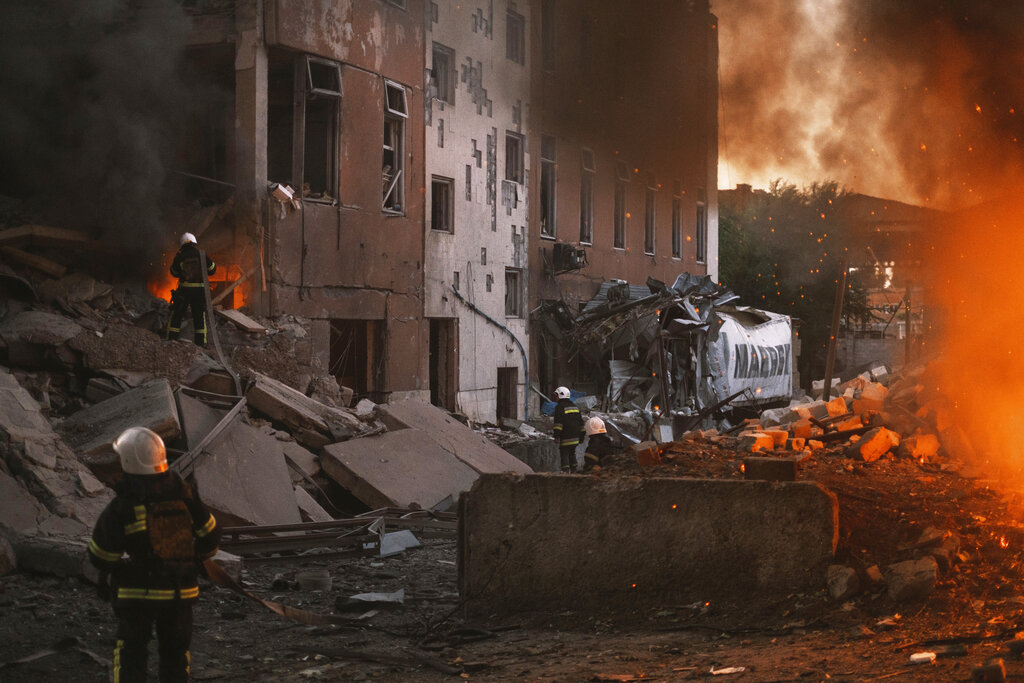 Firefighters work at the site of fire after Russian shelling in Mykolaiv, Ukraine. (AP Photo/George Ivanchenko)

For four months, we have tried in this Council to catalog Russia’s litany of atrocities in Ukraine, knowing full well that the information publicly available now is, sadly, only a fraction of the full extent of gruesome horrors that will likely be uncovered later.  The atrocities we have discussed in this Council and that were described by the Moscow Mechanism’s Fact-Finding Mission are simply repulsive.  We all recoil instinctively just at the mention of them.  They have been condemned in this Council.  The words of Franklin Delano Roosevelt ring true again today, when he said, “We have joined with like-minded people in order to defend ourselves in a world that has been gravely threatened with gangster rule.”

Mr. Chair, we have also exposed the obvious and preposterous lie that Ukraine’s Jewish and Russian-speaking President is a Nazi.  We have shown very clearly that the term “Nazi,” when used by Russian officials, is simply a code-word to refer to anyone who opposes Russia’s barbaric war against Ukraine.  Many in this Council have spoken about the Z symbols, the torture chambers, the filtration camps, the sexual violence, the re-education, and the forced displacement of civilians.  But we have not yet fully discussed the prevalence of far-right extremism and ultranationalism, indeed neo-Nazism, among Russia’s forces and proxies.

Atrocities do not happen naturally or spontaneously.  The utter contempt shown by such large numbers of Russia’s soldiers for the humanity of Ukraine’s elderly, women, and children is the direct outcome of feeding its forces a pack of lies about Ukraine and its people and the inculcation of ultranationalist and dehumanizing ideas among its troops.  Such ideology has long been propagated inside Russia and embodied by homegrown far-right extremist groups.

Mr. Chair, this far-right ultranationalism is in fact being cultivated as a tool of war.  The Kremlin’s longstanding support for violent, far-right extremist groups and its goal to destroy and subjugate Ukraine are two sides of the same coin.  We need look no further than the rampant hate speech denying the existence of Ukraine as an independent nation – rhetoric tinged with hardline Russian nationalist undertones feeding a domestic narrative that stresses a collectivist, tribal worldview.  The Kremlin’s ultranationalist agenda has also, at times, translated into support for neo-Nazi groups internationally aimed at destabilizing democratic countries.

The connections between the Russian state and neo-Nazi movements throughout Europe are extensive and well-documented, and many of these relationships illustrate an explicit link to Russia’s war against Ukraine.  Just last week, on June 15, the U.S. Department of the Treasury designated one such neo-Nazi – Anton Thulin – as a Specially Designated Global Terrorist.  Thulin, a Swedish citizen, was one of three men with a history in the neo-Nazi Nordic Resistance Movement who were convicted in 2017 of taking part in a bomb attack on a refugee center in Gothenburg, Sweden.  Swedish investigators discovered that Thulin and another accomplice had received weapons training in St. Petersburg from the Russian paramilitary group Partizan.  Partizan runs weapons-training courses on behalf of an ultranationalist organization called the Russian Imperial Movement, which has avidly supported Russia’s invasion of Ukraine.  The Russian Imperial Movement was previously designated by the U.S. Department of State as a Specially Designated Global Terrorist organization in April 2020 for providing training for acts of terrorism.  Despite the all-encompassing crackdown on domestic civil society groups across Russia, curiously the Russian Imperial Movement continues to operate.

The Kremlin additionally fosters a far-right information ecosystem comprised of Russian ultranationalists and media platforms whose propaganda directly feeds the Kremlin’s neo-imperial narrative seeking the subjugation and russification of Ukraine.  Geopolitica.ru is one such platform for Russian ultranationalists to spread disinformation and propaganda targeting European and other audiences.  Geopolitica.ru was inspired by the Russian fascist Alexander Dugin.  In 2015, the United States sanctioned Dugin for “actively” recruiting “individuals with military and combat experience to fight on behalf of the self-proclaimed Donetsk People’s Republic.”  Another Russian proliferator of virulent far-right, anti-Western propaganda is Katehon, a Moscow-based so-called “think-tank” with clear links to the Russian state and Russian intelligence services.  Additionally, the Strategic Culture Foundation is an online journal directed by Russia’s Foreign Intelligence Service and closely affiliated with the Russian Ministry of Foreign Affairs.  One of its core tactics is to publish fringe thinkers and conspiracy theorists in western countries, giving them a broader platform.

These hateful far-right platforms are closely linked to each other, as well as to the Russian government.  Leonid Savin, the chief editor of Geopolitica.ru, is formerly Katehon’s chief editor and is reportedly a member of the Military-Scientific Society of the Russian Ministry of Defense.  Dugin is an associate of Katehon’s sponsor, Konstantin Malofeyev, who also founded Tsargrad TV, which spews far-right disinformation.  According to media reports, Malofeyev has served as a proxy for Kremlin far-right influence operations in Europe, sponsoring meetings and conferences of ultra-conservative parties, as well as directly funding politicians and opinion makers who criticize liberal values and support the Kremlin’s policies.  The United States sanctioned Malofeyev in 2014 as “one of the main sources of financing for Russians promoting separatism in Crimea” and for bankrolling “separatist activities in eastern Ukraine.”  Since February 2017, Katehon has been headed by Mikhail Yakushev, whose career included stints at a foundation run by Vladimir Yakunin, a former KGB officer and former director of Russian Railways with close ties to the Kremlin.  Yakunin, who is also sanctioned by the United States for involvement in Russia’s invasion of Ukraine in 2014, helped establish the Dialogue of Civilizations “think-tank” in Berlin known for spreading the Kremlin’s far-right propaganda.

Mr. Chair, ultranationalist ideologies led to the deaths of tens of millions of human beings in the twentieth century.  They resulted in genocide and vast destruction on the European continent.  Despite this, Russia continues to deploy far-right ultranationalism in service of subjugating Ukraine, and in service of supporting neo-Nazi and extreme right-wing nationalist movements throughout Europe aimed at destabilizing and overthrowing democracy.  Russia has long wanted to discuss neo-Nazism in this Council, brandishing this topic like a threat.  Far-right ultranationalism is in fact present in the OSCE region, and we must speak clearly about who supports it and to what end.