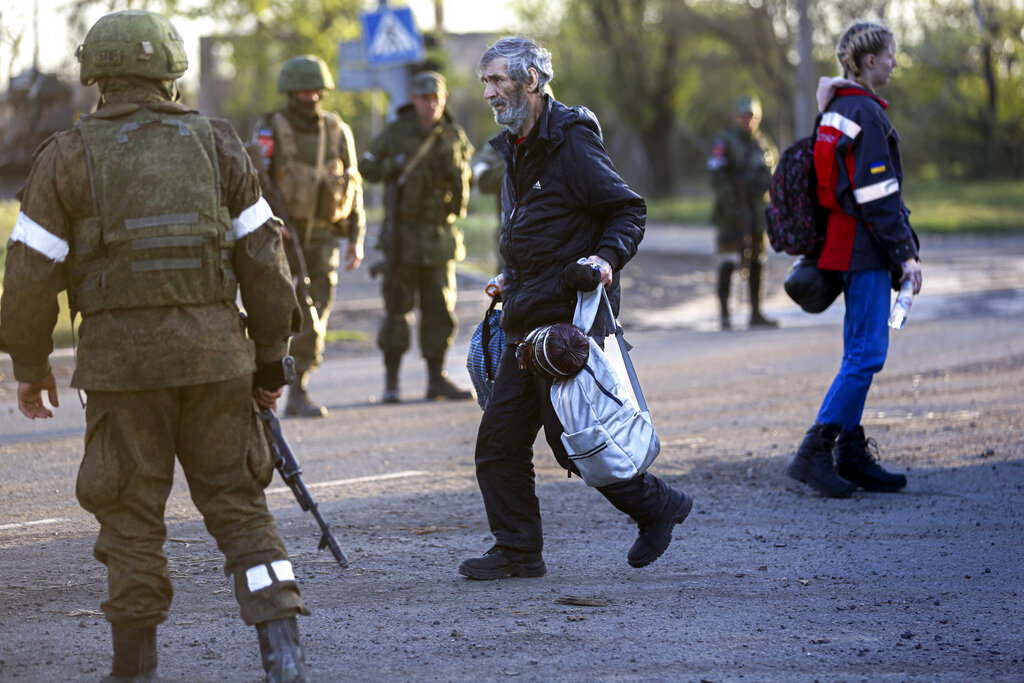 All those responsible for forced transfers of Ukrainian civilians to Russia will be identified and held to account for violations of international law. (AP Photo/Alexei Alexandrov)

Mr. Chair, by now we know that Russia has no intention of ceasing its barbaric practice of forcibly transferring Ukrainian civilians to Russia or Russia-controlled parts of Ukraine after subjecting them to so-called “filtration.”  This Stalinistic practice is the latest in a long Russian history of using mass deportation and depopulation to try to subjugate and control people.  It must be fully exposed and documented so that those who order or engage in these acts can be held to account.

The Ukrainian government has estimated that as many as 1.6 million Ukrainian civilians, including over 260,000 children, have been forcibly relocated to Russia.  Some of these children have reportedly been abducted by Russian authorities from Ukraine’s orphanages and transferred to Russia for adoption by Russian families.  The vast majority of forcibly transferred Ukrainian civilians remain trapped in Russia, without the documents, knowledge, or financial resources to escape, while Russian officials pressure them to give up their Ukrainian citizenship and hopes of ever returning home.  At the same time, Russia is reportedly settling those it considers loyal Russian citizens into the forcibly abandoned homes of these deportees in Mariupol, Kherson, Zaporizhzhya and other areas of Ukraine the Kremlin seeks to absorb into Russia.  These Ukrainian citizens who remain in Kherson oblast are at the mercy of an imposter “government” set up by Russia that is to be headed by Sergey Yeliseyev, a former Russian Federal Security Service (FSB) officer and deputy prime minister of Russia’s Kaliningrad oblast; at least two other members of this so-called “government” are former Russian officials.

Now we have learned armed agents of Russia’s national guard and, “most likely, the FSB” detained Kherson Mayor Ihor Kolykhayev as he arrived at an office space used by the city’s employees on June 28, according to mayoral advisor Halyna Lyashevska.  She posted to Facebook that Russian forces seized hard drives and documents, then “Kolykhayev was put on a Z bus and taken away” to an unknown destination.

We assess that Russia, with the help of proxy groups, almost certainly is using so-called filtration operations to conduct the detention and deportation of Ukrainian civilians to Russia.  Russian officials reportedly began preparations for the filtration process before February 24.  Russian officials likely created lists of Ukrainian civilians deemed threatening to Russia’s control of Ukraine, including anyone with pro-Ukraine views, such as political figures and activists, as well as security personnel, for detention and filtration.  At least 18 filtration locations along both sides of the Ukraine-Russia border have been identified thus far.

Of those Ukrainian civilians deported to Russia, stories are beginning to emerge from those few who manage to escape.  Their accounts paint a horrifying picture of Russia’s filtration operations and its systematic process of forcibly transferring Ukrainian civilians to Russia, often to remote areas of the Far East, from the territories that Russia has seized since February 24.

Survivors describe a multi-step process, beginning with Russian soldiers forcibly removing Ukrainian civilians from their towns and cities, with one survivor recalling to The New York Times that Russian soldiers who discovered her hiding in a basement told her she would be shot if she stayed.

Eyewitness accounts describe how Russia’s forces forcibly transfer these Ukrainian civilians to makeshift filtration waypoints in schools, cultural centers, sports halls, and other public buildings across parts of Russia-controlled eastern Ukraine and Russia, where Russian security forces subject them to harsh interrogations, often involving strip searches and beatings.  One such victim, Olena, has said that she escaped after surviving three weeks undergoing filtration in the so-called Donetsk People’s Republic, after Russia’s forces forced her there from her home in Mariupol.  Olena told The Guardian newspaper that the male Russian officer interrogating her ordered her to take off her blouse to check for bruises that could indicate she was a sniper.  “I told him, ‘I’m turning 60 years old this August.  How could I be a sniper?’  Nonetheless he ordered her to “take your top off now.”  Olena recalled that a guard interrogating a man at the next table discovered on him a keyring bearing the image of the Ukrainian coat of arms.  She said that four guards then kicked the man’s head and beat him with a baton before forcing him into freezing temperatures outside without warm clothing.

Igor Kurayan, a 55-year-old Ukrainian activist, told The Hill newspaper that “soldiers beat and electrocuted him for information, and twisted and cut his fingers using pliers and metal scissors.  Other prisoners were beaten so badly they died.”

Russian authorities reportedly confiscate Ukrainian identity documents and passports and issue papers to those who “pass” filtration, and then forcibly transfer many of them across the border to Taganrog, a city in Russia along the border with Ukraine.  Once in Taganrog, Russian authorities force them onto trains bound for destinations across Russia, sometimes thousands of miles away, without giving them any choice as to their final destination and often without even telling them where they are being sent.  One escapee from Russia to Estonia recounted to The New York Times, “No one warned me, no one told me I would never go back home.”  Another escapee recalled, “They just put us on buses and drove off,” while another said, “If I had had the choice, I would never have crossed the border with Russia.”  These train journeys often take several days or longer, with one escapee telling The New York Times of being forced to remain for nine days on a train bound for Khabarovsk on Russia’s border with China.  Another described how she, her husband, and their young son escaped from a filtration site after overhearing a Russian official say they were to be deported to an island in the Pacific.

Many escapees report being pressured to take Russian citizenship after arriving at makeshift resettlement facilities across Russia, a process requiring them to turn in their Ukrainian passport.  One escapee explained to The Guardian, “You have to tell them you want to stay and make a life in Russia, then they’ll leave you alone,” thereby providing an opportunity to flee.  Several of these resettlement facilities reportedly restrict the movement of their residents from Ukraine and ban visitors, and many are so remote that there is no practical way to leave. Another escapee recalled to The New York Times being interrogated after going out to see a movie and said that Russian officials later came to interrogate everyone in her resettlement facility, asking her “Are you for Zelenskyy?”  Local Russian authorities often greet the trains with a heavy media presence in tow so as to push the false narrative on Russian state television that Russia is providing sanctuary to so-called  “refugees” from Ukraine.

Families in Ukraine often have no idea of the fate of their relatives who have been resettled, or in fact, whether or not their loved ones are even still alive.  There is no public register, there are no hotlines that can be called, there is no accountability.  One can only imagine the pain of not knowing what has happened to your parents, your siblings, your husband or wife or partner, or your children.

Mr. Chair, the international community must step up efforts to document Ukrainian civilians who have been forcibly transferred to Russia, and we must do everything we can to ensure Ukraine has the resources needed to repulse Russia’s aggression.  Only by ending Russia’s aggression will Ukraine ensure that those forcibly deported to Russia can return home and rebuild their lives.   And let me be clear: all those responsible for forced transfers of Ukrainian civilians to Russia will be identified and held to account for violations of international law.