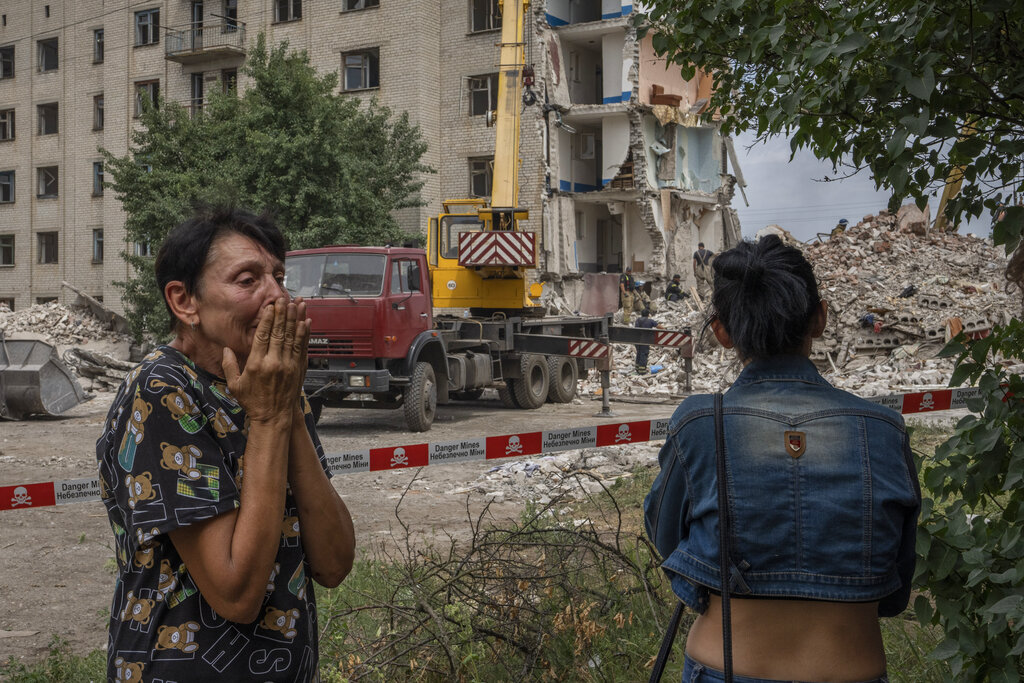 Woman weeps at the scene in the aftermath of a Russian rocket that hit an apartment residential block, in Chasiv Yar, Donetsk region, eastern Ukraine, Sunday, July 10, 2022. At least 15 people were killed & more than 20 people may still be trapped in the rubble. (AP Photo/Nariman El-Mofty)

This has been another bloody and tragic week in Ukraine.  Russian rockets struck an apartment complex on Saturday in the village of Chasiv Yar, killing at least 47 people, including children.  In eastern Donetsk province, where Chasiv Yar is located, at least nine other towns and cities were bombed, bringing the civilian death toll in that province alone to over 600 in the period since Russia’s full-scale invasion began on February 24.  In Kharkiv, Russia’s bombs hit a six-story apartment building on Monday.  Meanwhile, President Putin this week signed a decree that will offer a “simplified path to citizenship” for all Ukrainian nationals, again demonstrating his intentions are to try to russify and take over all of Ukraine.

As Russia’s full-scale invasion of Ukraine enters its fifth month, I would like to spend some time speaking about how Russia’s forces have increasingly restricted humanitarian access to the Russia-controlled areas of Donetsk, Luhansk, Kharkiv, Kherson, Mykolayiv, and Zaporizhzhya.  Since early June, the delivery of life-saving aid has been largely cut off from such areas due to Russia’s unrelenting attacks and the bureaucratic restrictions imposed by Russia and its proxies.  While many people have fled from Ukraine’s south and east, the millions of civilians remaining in Russia-controlled areas – including many elderly persons and individuals with disabilities who could not easily escape – lack access to basic services and face rapidly deteriorating humanitarian conditions.  It is worth noting here that as a party to the First Additional Protocol to the Geneva Conventions, Russia is obligated to allow and facilitate the rapid and unimpeded passage of relief consignments, equipment, and personnel.  To refuse to do so is a violation of International Humanitarian Law.

Mr. Chair, on January 19, on the occasion of the opening session of the Forum for Security Cooperation, I warned that, “We are potentially on the brink of both a security crisis and a humanitarian catastrophe.”  Of course, my Russian Federation colleague at the time dismissed this as wild hyperbole.  I truly wish it had been.  But a half-year later, it is nearly impossible to adequately convey the vast scale of the humanitarian catastrophe in Ukraine.  Each family displaced from their home, each child torn away from their school, friends, routine, and sense of safety and security, each person who lost a loved one – any one of these individual stories reveals a depth of pain that cannot be captured with words or statistics alone.  There are more than 11 million individual stories of those who have been displaced from their homes – a quarter of Ukraine’s entire population.  There are nearly 16 million people in need of immediate humanitarian assistance due to Russia’s aggression.  These individuals – millions of mothers, fathers, and children who have lost everything – they are the future of a strong, independent, resilient Ukraine.  We must help them.

Despite the obstacles imposed by Russia, the United States and our partners are committed to meeting as many of the critical humanitarian needs of these conflict-affected people as we can by providing safe drinking water, shelter, sanitation, hygiene supplies, emergency mental health and physical health care, and support for gender-based violence survivors, as well as emergency food and cash assistance.  On July 9, Secretary Blinken announced a further round of humanitarian aid totaling $368 million.  Since February 24, we have provided over $1.28 billion in humanitarian assistance to conflict-affected Ukrainian citizens, and we are the largest single-country donor of humanitarian assistance to Ukraine.

Both directly and through our partners, our humanitarian assistance is providing critical support to millions of people.  Our emergency food assistance has reached 1.3 million conflict-affected individuals, helping families fleeing active fighting and households that have lost income to access the food they need.  One mechanism we continue to deploy to support these efforts is direct cash assistance, which has helped over two million conflict-affected individuals access food, household items, shelter, safe drinking water, and other supplies through local markets, providing a fast and efficient way of reaching vulnerable communities.  To support the health needs of conflict-affected populations, the United States is providing health care supplies, medicine, and other health assistance in Ukraine and neighboring countries.  We also continue to assist local organizations and international NGOs that are together providing gender-based violence services that have reached 200,000 individuals across 13 different oblasts in Ukraine.  As we move through summer and head toward a new school year and frigid winter, the needs of the displaced and refugees are likely to evolve.  Children, who will be the foundation to Ukraine’s future, will need new educational resources so they do not fall behind their peers.  As the coldest months set in, people will need shelter, food, and ways to stay warm.  We will continue to work with our partners to ensure these needs are met.

In addition to humanitarian assistance for the people of Ukraine, we are committed to providing economic assistance to the government of Ukraine as it is forced to divert vast resources to defend itself from Russia’s aggression.  Since February 24, we have provided a total of $4 billion in budget support to pay government salaries, meet pension obligations, maintain hospitals and schools, and protect critical infrastructure.  The Biden Administration intends to provide an additional $4.5 billion in budget support by the end of September as Ukraine continues to expend resources defending itself against Russia’s aggression.

Finally, Mr. Chair, we are providing military assistance because we recognize that it is crucial to Ukraine’s victory.  On July 8, Secretary Blinken announced the 15th drawdown of arms and equipment from U.S. defense inventories in the amount of $400 million.  This brings our total military support for Ukraine to $7.32 billion since Russia launched this war of conquest.  Much discussed in the news are the provision of HIMARS, or High-Mobility Artillery Rocket Systems.  These are precision artillery systems that Ukraine has used to great effect to defend itself against the aggressor.  As Ukraine’s Defense Minister has stated, the HIMARs are “a game changer on the front lines.”  We certainly hope so.

Mr. Chair, at some point this war will come to an end.  Until that day comes, the United States and our partners will continue providing the humanitarian, economic, and security assistance Ukraine needs to defend itself against Russia’s barbaric and unprovoked aggression.