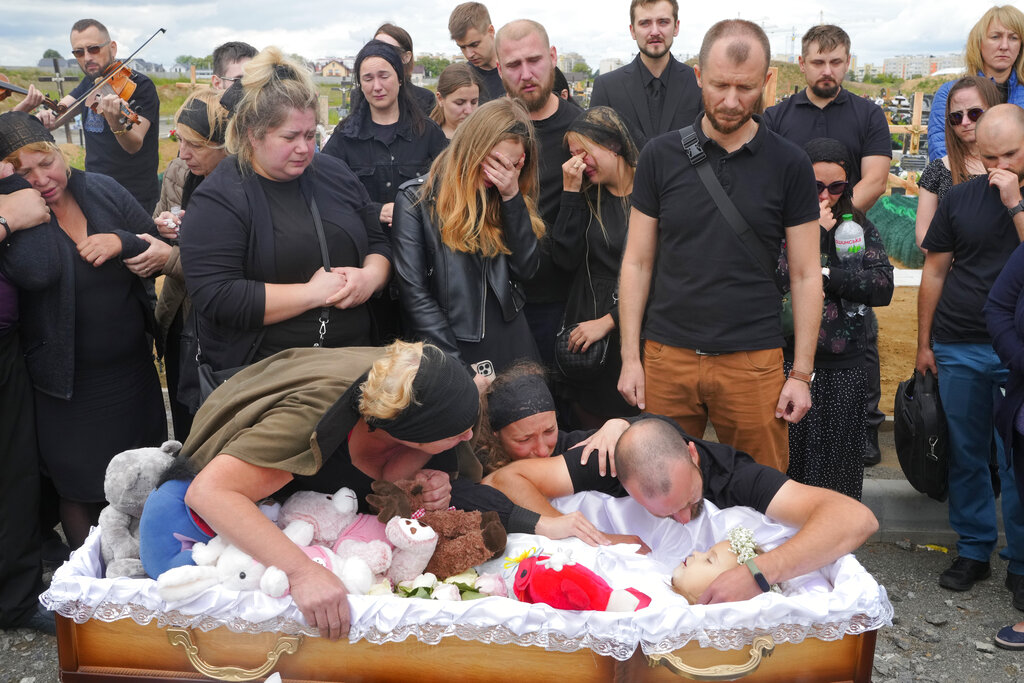 Relatives and friends attend the funeral ceremony for Liza, 4-year-old girl killed by Russian attack, in Vinnytsia. Liza was among 23 people killed, including two boys aged 7 and 8, in Thursday's missile strike in Vinnytsia. Her mother was among the scores injured. (AP Photo/Efrem Lukatsky)

At 10:41am last Thursday, on the streets of Vinnytsia, a mother and her four-year-old girl pushed a stroller as two boys daydreamed about the sunny summer day ahead.  In The Hague, an international conference was underway focused on holding Russia to account for the war crimes and other atrocities committed by members of Russia’s forces in Ukraine.  And here in Vienna, we convened in this Council to condemn Russia’s relentless strikes hitting civilians, including a missile attack on Chasiv Yar on July 9 that claimed at least 48 lives.  At that moment, at that very moment, three Russian missiles were rapidly descending on Vinnytsia, a mid-sized city far from the front lines, totally devoid of objects of military value.

A minute later, at 10:42, four-year-old Liza lay in a pool of blood beneath her upturned stroller, astride a dismembered adult foot.  Her mother lay critically injured beside her.  Nearby, the two young boys also lay dead.  Russia’s missiles struck a medical center, offices, stores, and residential buildings in Vinnytsia reportedly killing a further 21 people and injured over 200.  As these victims lay dead and dying on the streets of Vinnytsia, Russia’s delegate in this chamber prepared to deliver his weekly propaganda denying his government’s responsibility for the scores of Russian strikes destroying civilian infrastructure and killing civilians across Ukraine.

Mr. Chair, with every unconscionable strike hitting Ukrainian civilians, the Russian government reveals its true nature to the world.  The Russian delegate in this Council can add all the propaganda items he wants to the agenda of this meeting, but none of it changes the reality that we all witness every day.  Brazen lies about the killing of innocent people does not make for compelling diplomacy and will not help Russia to convince anyone in this Council or anywhere else to sympathize with its neo-imperial aims of domination.  Perhaps its stalwart allies like Syria and North Korea will support its cause, but this Council sees right through these lies.  And with each cruel attack, the people of Ukraine become ever more determined to defeat the dark forces of destruction and oppression Russia has unleashed on their country.

On July 16 alone, Russia pummeled Mykolaiv, Dnipro, Sumy, and Kharkiv with dozens of missiles, striking apartment blocks, homes, and a school, and killing and injuring ever more innocent civilians.  This followed a barrage of 10 missiles that struck two universities in Mykolaiv the day before.  Russia’s strikes on Dnipro reportedly hit residential neighborhoods, killing three, including a bus driver who had just finished his daily shift.  To give a sense of the viciousness of these attacks, one of the missiles in Dnipro melted storefronts, blew out windows in several nearby apartments, and set nearby trees ablaze.  Elsewhere in Ukraine, while the world faces a global food crisis thanks to Russia’s actions, Russia’s forces literally set fire to fields of grain.

Mr. Chair, these are not just attacks on Ukraine, but on all the rules and norms the international community has spent decades codifying and strengthening.  They are an attack on the very purpose of this organization.  And they lay bare the existential stakes of this conflict for Ukraine’s survival as a free, sovereign, and democratic country on the path to Euro-Atlantic integration.

Indeed, in Ukraine’s south and east Russia is demonstrating what awaits any Ukrainian lands that fall under its control.  As Russia’s missiles strike civilians across Ukraine, Russia’s forces continue to subject Ukrainian civilians in areas under its control to so-called “filtration” to conduct the detention and deportation of these individuals to Russia.  Russia’s forces “disappear” Ukrainian citizens who do not pass “filtration.”  On Tuesday, I met Olena Yuzvak and Oleh Gordiychuk at the Special Human Dimension Meeting.  Together with their son Dima, Olena and Oleh were abducted from their home in Hostomel in March after Russian forces shot Oleh in the hip and knee.  Olena was released after surviving two days of brutal interrogations, including having a plastic bag taped over her head, but her husband and son were not so lucky.  Both were transported to a filtration center in Belarus – yes, more evidence of the Lukashenka regime’s complicity — where they underwent further interrogations.  Eventually Oleh was forced onto a plane to a prison camp in Novozybkov in Russia, where he was beaten and nearly died of an infection before being released in a prisoner exchange weeks later.  Oleh never saw Dima again since they were separated in the filtration camp in Belarus nearly four months ago.  To this day, Olena and Oleh do not know the fate of their son.

Mr. Chair, we reiterate once again that the forced deportation of protected persons is a grave violation of the Fourth Geneva Convention on the protection of civilians, and is a war crime.  We call on Russia to immediately halt the so-called “filtration” process and provide outside independent observers access to these facilities and to relocation areas in Russia, and we demand that Russia account for all those, like Dima, whom Russia’s forces have detained or abducted during filtration.  All those responsible for this abhorrent practice will be held accountable.

Mr. Chair, I also want to take this opportunity to comment on reports that British national Paul Urey died while in the custody of Russia’s proxies in eastern Ukraine.  Russia bears full responsibility for the death of Mr. Urey, who was reportedly in Ukraine undertaking humanitarian work to aid the victims of Russia’s war.  Indeed, Russia bears responsibility for arbitrary detentions, extrajudicial killings, torture, and other atrocities committed in the so-called “Donetsk and Luhansk People’s Republics.”  As the ODIHR report issued yesterday and both Moscow Mechanism reports have made crystal clear, Russia has overall control of these areas. We also demand that Russia immediately and unconditionally release the three national staff members of the OSCE Special Monitoring Mission who remain unjustly detained.

Mr. Chair, I want to close by quoting Secretary Blinken’s address to the Ukraine Accountability Conference in The Hague last Thursday.  “Allowing these grave abuses in Ukraine to go unpunished will not only embolden the Kremlin, but brutal regimes everywhere…  These are not the acts of rogue units.  They fit a clear pattern, across every part of Ukraine touched by Russian forces…  We owe it to victims everywhere – and those vulnerable to such atrocities – to work relentlessly to stop these crimes.  And we owe it to them to stay on the long path to justice.  So that when perpetrators are eventually forced to stand for their crimes – and that day will come – the case against them will be unimpeachable.