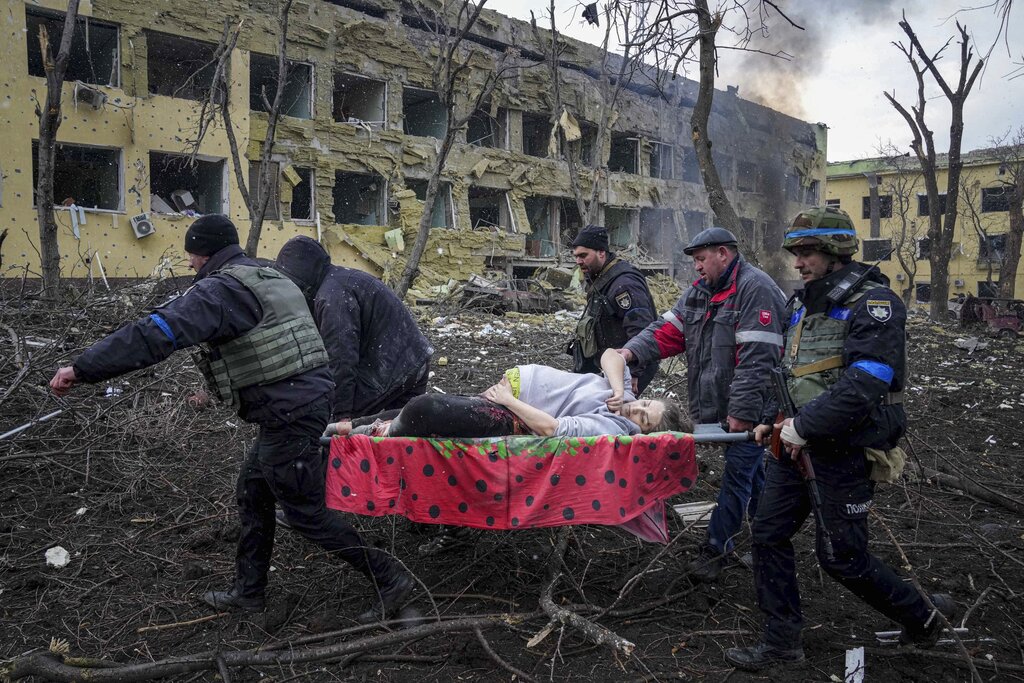 I’d like to thank Under-Secretary General Griffiths and Special Representative Palihovici for their very powerful presentations.

Today is the 15th day of President Putin’s brutal, unprovoked, and unconscionable war against Ukraine. Even as the Russian military advance has stalled and, in some cases, been repelled on the outskirts of several major Ukrainian cities, we have witnessed Russia resort to ever more barbaric tactics, targeting cities and civilians – schools, hospitals, apartment buildings. The resulting scenes of death and devastation in cities and towns across Ukraine – Hostomel, Kharkiv, Kherson, and so many others – are haunting. Yesterday was surely one of the saddest days of the war after Russia bombed a children’s and maternity hospital in Mariupol. I simply have no words to describe this vile wickedness. And incredibly, speaking earlier today, Russian Foreign Minister Lavrov confirmed Russia deliberately struck the hospital, regarding it as a legitimate target. Incredible!

But it is far from unique. Amnesty International reports that a Russian airstrike on Chernihiv killed at least 47 civilians on March 3 with “no legitimate military target at, or close to, the scene of the strike.” At the Irpin bridge on the outskirts of Kyiv, elderly residents and children came under fire as they tried to evacuate the area on foot. The Mayor of Irpin reported that a mother and her two children were killed on the spot when Russian forces opened fire.

Unfortunately, the situation is likely to get significantly worse in the coming days. Yesterday we learned that Russia’s targeting of civilian infrastructure had cut electricity supply to the Chernobyl Nuclear Power Plant. The sanctity of human life clearly does not register in the Kremlin. And now Russia is feverishly spreading disinformation about biological weapons: I shudder to think what they’re planning next.

The images of terror, shock, and grief on the faces of the civilians fleeing Russia’s aggression will forever haunt us, and forever stain the reputation of the Russian military. I hope these images remain indelibly seared in the minds of the Russian representatives sitting in this room today. Before they take the floor, let them bow their heads in a minute of silence for every victim of Russia’s brutal aggression.

Russia’s repulsive tactics are exacerbating the already dire humanitarian situation around Ukraine. Russia’s aggression has deprived so many towns and cities of running water, electricity, and heating fuel. As the UN High Commissioner for Refugees said recently, we are now facing the fastest-growing refugee crisis since the Second World War, with two million refugees already documented and many more likely to flee in the next week. This massive outflow of people – including many women and children – will stretch national resources to the limit. And as always, the crisis will disproportionately affect the most vulnerable among them.

Through its siege warfare actions, Russia is also preventing civilians from fleeing and blocking supplies from getting in. In Mariupol, Kharkiv, Sumy, Mykolaiv, and elsewhere millions of civilians are bombarded and cut off. Civilians need full, safe, and unhindered humanitarian access, and they need it immediately. Beginning with these priority areas, Russian forces must honor Ukrainian proposals for safe passage of civilians and supplies. They must let civilians out, and they must let aid in.

Among these horrors, we are so, so grateful for the incredible hospitality and compassion of Ukraine’s neighbors in sheltering, feeding, and comforting the refugees from Ukraine. We thank especially Poland, Slovakia, Hungary, Romania, and Moldova. The United States is also committed to doing our share. Yesterday the United States Congress moved ahead with a $13.6 billion supplemental funding bill to support the needs of the Ukrainian people. Regrettably, not all of Ukraine’s neighbors have leaders who stand on the right side of history. We condemn the Lukashenka regime’s support for Russia’s premeditated attack on its peaceful neighbor.

Mr. Chair, Russia must end this war of conquest. It must end it now. It will never succeed in establishing the sphere of influence its leader so desperately craves. Its continued prosecution of this war will only cause more suffering in Ukraine, and it will bring ruin to Russia.

Mr. Chair, I’d also like to spend a few minutes discussing what a possible Russian occupation or seizure of Ukraine would look like. Because, in fact, we know exactly what it would look like. Russia has done this before. Since 2014, there have been scores, if not hundreds of reports documenting atrocities by Russia and its proxies in Russia-controlled parts of the Donbas and in Crimea. There are credible reports of enforced disappearances and abductions of dissidents, members of religious and ethnic minority groups, and others who dare to voice dissatisfaction with Russia’s criminal rule. Systematic repression of religious and ethnic minority groups, torture, and arbitrary imprisonment are commonplace.

What I’m about to say is rather graphic, but I’m afraid it needs to be said. At prisons and unofficial places of detention in the so-called “DNR” and “LNR,” even before Russia’s further invasion, Russia-led forces routinely beat and physically and psychologically tortured detainees, conducted mock executions, committed sexual violence, deprived detainees of food, water, and medical care, and required forced labor. Also, according to the UN, women and men are victims of sexual violence, including rape, threats of rape, threats of castration, intentional damage to genitalia, threats of sexual violence against family members, sexual harassment, coercion to watch sexual violence against others, forced prostitution, and humiliation. Again, I am quoting the UN.

Russia’s proxies in the Donbas and occupation forces in Crimea have also restricted freedom of expression on the street, in the media, and on the internet. They have actively obstructed international organizations attempting to deliver humanitarian aid to the local population in a cynical effort to malign Ukraine.

So, we don’t have to guess what Russia will do if it occupies Ukraine; we’ve been watching it play out for eight straight years. Colleagues, Russia’s propagandists tried hard to convince the world that the armed groups in Donbas were just “separatists” – but we all know they were acting on Moscow’s orders.

We cannot allow Russia to extinguish a democratic, independent, sovereign Ukraine. We are called upon to stand by the founding principles of this organization. That means we must also stand by the people of Ukraine as they defend their homes, their neighborhoods, their cities, and their country. And their freedom.

I request that this statement be appended to the Journal of the Day.