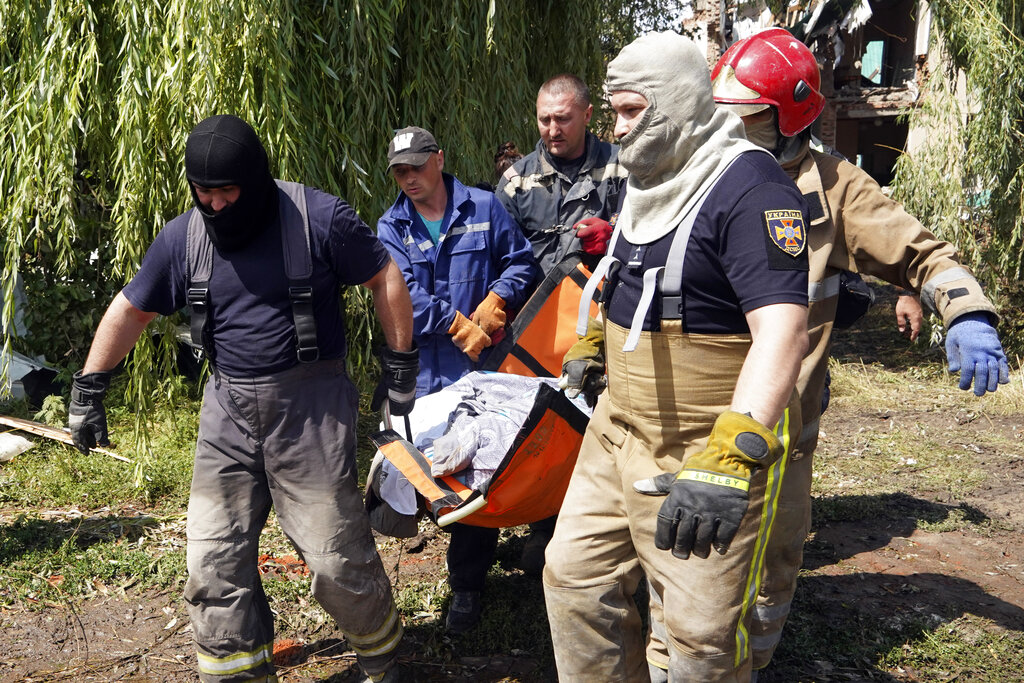 Mr. Chair, it has been over five horrifying months since Russia launched its brutal attack on its peaceful, democratic neighbor.  Throughout this period, the Russian Federation has lied and obfuscated at every turn.  First, it refused to engage in diplomacy through the Renewed European Security Dialogue.  Then, it refused to provide transparency under the Vienna Document.  Finally, it violently breached Ukraine’s international border.  Its armed forces tried to annihilate the Ukrainian government, and, as the Moscow Mechanism Fact Finding missions have documented, engaged in rape, torture, and extrajudicial killings of Ukrainian civilians.  Russia bombed schools, hospitals, and shelters with giant letters marked “CHILDREN.”  Russia uses food and energy supplies as tools of coercion.  And most recently, the Russian Federation committed to allowing Ukrainian grain to be exported to the world, only to bomb Odesa as the ink on its deal was still drying.

Mr. Chair, amidst all of this treachery, the Russian Federation is moving full speed ahead to implement its policy of social engineering in the territories it temporarily controls, aiming to undermine Ukrainian national identity and instill fear amongst Ukrainians.  We all know the Kremlin’s goal is to annex Ukrainian territory, like colonial powers of centuries past.  But it will fail.  The courageous Ukrainian citizens who live in these temporarily occupied regions are resisting and fighting back, showing the world that Russia’s neo-imperial endeavor will never succeed.

But in the meantime, the Kremlin continues to cause untold human suffering.  According to Ukrainian authorities, Russian officials have interrogated, detained, or deported well over a million Ukrainian citizens, including children, to Russia.  There reports continue piling in that Russia’s forces are detaining, forcibly disappearing, and undertaking the most sadistic forms of torture against civilians.  As Human Rights Watch put it, Russia has turned the areas it has seized since February into “an abyss of fear and wild lawlessness” for those who remain.

Mr. Chair, forced population transfers are the key to the Kremlin’s plan.  To stand any chance of controlling this territory, Moscow has apparently calculated it must either bomb the territory until nothing is left but dust or engage in forced deportation of local residents via the so-called “filtration process.”

Yesterday we heard directly from some of the survivors of Russia’s “filtration” operations. Ihor Talalay described his ordeal, which began when he volunteered to help the besieged residents of Kharkiv, Mariupol, and Volnovakha.  His first encounter with “filtration” was when he was apprehended and detained in a garage, where he was tortured and beaten with a rifle butt and threatened to be shot in the knees until he bled to death.  He was then passed through successive filtration camps: Manhush, Dokuchayevsk, and then Donetsk.  Eventually he was taken to an overcrowded cell in Olenivka, where he described how torture can make detainees break down psychologically. It was chilling testimony.

Maria Vdovychenko also described her “filtration” experience, which resulted in the death of her grandmother.  As she explained, her Russian captors did not treat their Ukrainian detainees like humans at all.  She described the intense humiliation she and others felt. The threats to cut off her father’s ears.  The lack of any air to breath.  The blood everywhere.

Those of you who attended yesterday’s event also heard the heartbreaking testimonial of Olha Tabachuk and her son Vyacheslav Volyvach.  No words can do justice to their pain and suffering after Olha’s younger son Sergei was disappeared into the Russian filtration gulag.  He was last seen in the filtration camp in Olenivka, but has not been seen since.  As Olha told us, not a minute goes by when she doesn’t think of her son.

Other witnesses describe how Russian authorities who engage in these filtration operations are deliberately separating Ukrainian children from their parents and abducting others from orphanages before putting them up for adoption inside Russia.  There are reports that some individuals targeted for “filtration” have been summarily executed, consistent with evidence of atrocities committed by Russian forces in Bucha, Mariupol, and other locations in Ukraine.

Those who remain in Ukrainian territory under Russia’s control face what can only be described as living hell.  According to Human Rights Watch, in Kherson alone at least 600 people have been forcibly disappeared since February.  Of those detained and released, survivors described prolonged beatings, and in some cases electric shocks, that resulted in broken bones and teeth, severe burns, concussions, broken blood vessels in the eye, cuts, and bruises.

One protest organizer reported being detained by Russia’s forces while delivering humanitarian aid.  Human Rights Watch reports that when he told his interrogators he was not a protest organizer, just “a patriot of my country, Ukraine,” he recalls they responded, “There is no such country.”  He reported they then hit him with his shoe, knocking him over, and kicked and punched him for several minutes.  The soldiers then made him take off his jeans, taped his legs together and continued beating him.  They administered electric shocks through clips they attached to his earlobes, at first for a few seconds, then for up to 20 seconds, while asking questions about protests and volunteer work. “Everything went dark and I saw orange spots,” he said.  “They took an automatic [weapon] and pointed it at my groin and told me to prepare to die.”  He eventually escaped to government-held territory, where he spent over three weeks in hospital.

Colleagues, this is the same regime that sits around this table and repeatedly lies and tries to disavow these bestial acts.  But I have yet to hear Russia’s representative explain why no one else in this Council has defended his regime’s lies. No one.

Mr. Chair, facing a deeply hostile population repulsed by such a sadistic disregard for human life, the Russian government appears to have given up its search for local collaborators, instead turning to importing Russian officials to implement its russification strategy intended to deny Ukraine’s history and independence, and suppress Ukrainian language and identity.  The Russian government is reportedly offering nearly six times the average monthly salary to Russian teachers to move to Kherson and Zaporizhzhya to teach a curriculum that denies the very existence of Ukraine.  Unable to find local government officials to act as their puppets, the Kremlin is instead bringing in Russian agents to head its imposter administrations in Kherson and Zaporizhzhya.

In the face of this, the local population of these regions have shown that they will never accept the Kremlin’s plans to illegally annex Kherson, Zaporizhzhya, and other areas of Ukraine by force.  We see local resisters fight back against the invaders.  For our part, I can say that the United States will never, ever, recognize any attempts by Russia to pass off fake, illegal, illegitimate annexations of Ukrainian territory, just as for a half century following the Welles Declaration on July 23, 1940, the United States refused to recognize the Soviet Union’s illegal attempt to annex the Baltic states.

Mr. Chair, for as long as it takes, the United States will help the brave people of Ukraine repulse Russia’s aggression.  On July 22, we demonstrated our enduring commitment to Ukraine’s ability to defend itself with the announcement of an additional $270 million in security assistance, including more HIMARS advanced rocket systems and other weapons that Ukrainian forces are using so effectively on the battlefield.  These arms and equipment will increase the total amount of security assistance announced by the United States to Ukraine to approximately $8.2 billion since the beginning of the Biden administration.

We again commend our Allies and partners from more than 50 countries that have joined us to continue providing heavy weapons, munitions, and other vital security assistance to Ukraine.  All these contributions are critical to providing Ukraine the support it needs to continue defending itself against Russia’s brutal war.  The United States is in this for as long as it takes.

Finally, Mr. Chair, one last thing.  It has become increasingly clear that President Putin is trying to hide the fact that his economy is on the precipice of an industrial meltdown.  Just as in the Soviet period, the Kremlin’s economic data are not being reliably reported.  This is part of an effort to make the international community believe that, as one Russian senior official said with false bravado, things “are just getting started.”  But industrial production figures tell an entirely different story. Widespread supply shortages, rising inflation, plummeting consumer confidence, and a massive outflow of global companies and foreign investment from Russia show that this war is simply not sustainable.

Russia must end this war now before the moral and economic bankruptcy of this so-called “special military operation” causes more suffering.  Leave Ukraine.  Get out.  Go back to Russia.  Focus on rebuilding your own country and improving the lives of your own citizens.  Stop lying and reneging on your commitments.  The world — and your children and grandchildren too — will be better off for it.