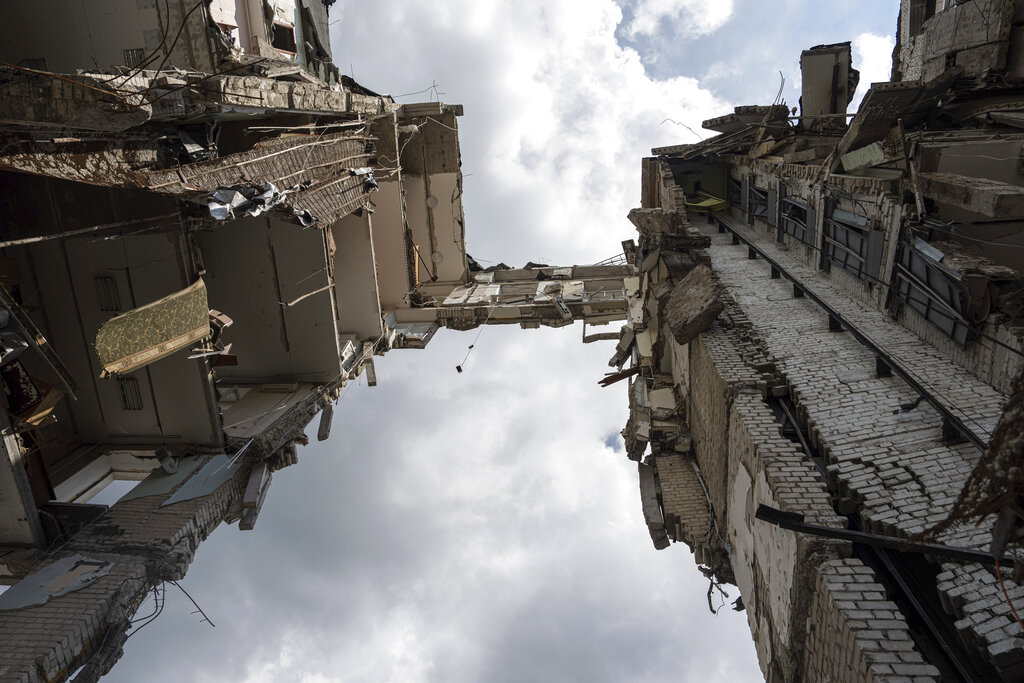 A view of the headquarters of the Mykolaiv Regional Military Administration building destroyed by a Russian attack in Mykolaiv, Ukraine, Friday, Aug. 5, 2022. (AP Photo/Evgeniy Maloletka)

Russia’s brutal attack on its peaceful, sovereign neighbor has now entered its sixth month and the human costs are quite simply staggering.  Thousands of innocent civilians killed or wounded, 13 million Ukrainians – that’s more than the entire population of Belgium, or the entire population of Sweden, 13 MILLION people have been forced to flee their homes, historic cities literally turned to rubble, skyrocketing food prices around the world, and all because President Putin could not abide an independent, sovereign, and democratic Ukraine.  Virtually every day or week since February has brought fresh reports of brutality and atrocities committed against innocent civilians in Ukraine by Russia’s forces.

Since this Permanent Council last met, the tempo of Russia’s assault against Ukraine has not let up, but a few examples of the inhumanity shown by Russia’s forces and its proxies stand out.  On the evening of July 29, in Olenivka in Russia-controlled Donetsk, more than 50 Ukrainian prisoners of war were killed by an explosion at a detention center.  Preliminary reports indicate it is likely Russia was responsible for this unconscionable incident.  As if this behavior was not enough to demonstrate Russia’s cold disregard for the norms of civilized behavior, in reference to the incident the official Twitter account of Russia’s Embassy in London posted that “Azov militants…deserve execution [and]…a humiliating death.”  In a repugnant bid to continue Moscow’s disinformation campaign, the Russian representative to this Council was quoted on Twitter on July 29 claiming that it was Ukrainian armed forces who shelled the detention facility and were responsible for the deaths of their own prisoners of war.  That would be laughable, if it wasn’t so vile an allegation.  In fact, U.S. intelligence suggests Russian officials plan to plant evidence in anticipation of journalists and investigators visiting the site of the attack to try to frame Ukrainian Armed Forces for this unconscionable attack.  This is par for the course for the Kremlin, to accuse others of what you do yourself.  The fact that the Red Cross has not yet been permitted to visit Olevnika, eleven days after the fact, underscores the cynicism of Moscow’s assertions.  What does the Kremlin have to hide if not proof of its own culpability?

It is hard to find words sufficient to describe the outrage elicited by a recent video circulated on social media that showed the castration of a helpless, bound and gagged Ukrainian prisoner by pro-Russian forces.  After performing this gruesome and frankly medieval act, the footage then shows the perpetrators shooting the defenseless man in the head.  It is quite simply appalling. There is no justification for this act of barbarism.

Meanwhile, Russia’s armed forces and their proxies have continued levelling Ukrainian cities and flattening schools, hospitals, and residential areas.  On July 31 alone, Russian rockets and bombs hit 23 towns and villages in Donetsk, striking 42 residential buildings.  In recent days, Mikolaiev has come under some of the worst barrages of the war, with over 40 missile strikes on the night of July 30-31 alone, and residential areas are still experiencing repeated and indiscriminate attacks.  One strike on July 29 killed nine people at a busy bus stop.  Another sparked a massive fire at a hospital.  Deeply concerning as well are credible recent reports that Russia is firing on Ukrainian forces from and around the Zaporizhzhia nuclear plant, putting the plant and surrounding area at risk of catastrophic damage.

These ongoing attacks, the wanton destruction, and the hundreds of reports of atrocities committed by Russian forces underscore more than ever the need for international investigation and accountability mechanisms, as well as a strong OSCE presence in Ukraine.  The United States is committed to supporting efforts to gather, preserve and analyze evidence of war crimes.  The Biden Administration applauds the visit to Ukraine by Chair-in-Office Rau and Secretary General Schmid on August 2 and strongly supports their announcement that the OSCE will continue its presence there to support these critical efforts and extend assistance regarding post-war reconstruction and addressing the heightened risks posed to the civilian population by the war.

The United States will continue to help provide Ukraine with precisely what it needs to defend its freedom.  Yesterday, Secretary Blinken announced the authorization of up to $1 billion of arms, munitions, and equipment from U.S. Department of Defense inventories for Ukraine’s self-defense.  And on August 1, we announced another $550 million in new military assistance, which includes additional ammunition for HIMARS and artillery.  These bring our total security assistance to approximately $9.8 billion since the beginning of the Biden administration.

Our partnership with, and commitment to, the people of Ukraine is steadfast and enduring.  The United States will continue to stand with Ukraine and its people.