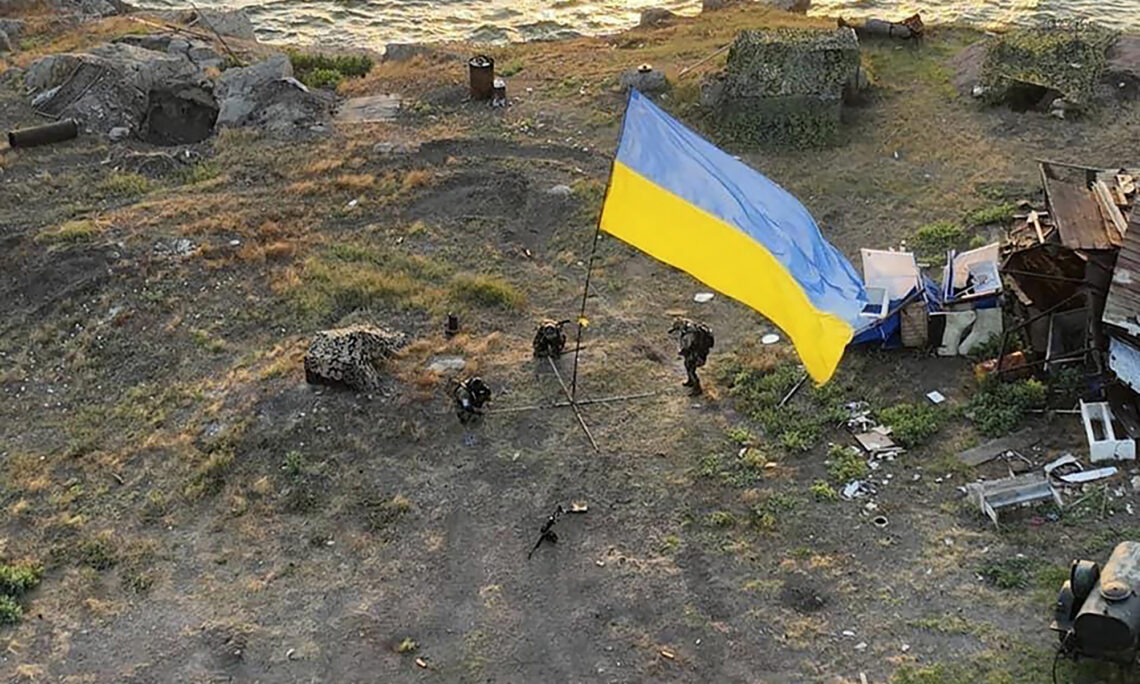 Ukrainian soldiers install the state flag on Snake island, in the Black Sea. The Ukrainian military returned the flag of Ukraine to island, which had been under the control of Russian troops for some time. (Ukrainian Defence Ministry Press Office via AP)

Today we mark Ukraine’s Independence Day, commemorating 31 years since Ukraine broke free from the Soviet empire, unshackling the Ukrainian people from the Kremlin’s totalitarian grip and joining the community of sovereign, independent states.  Today, we also mark six months of Russia’s barbaric assault on its peaceful, democratic, and sovereign neighbor.  This aggression is clearly a naked attempt to reverse the events that occurred 31 years ago by turning Ukraine once again into a captive nation.

Violating the UN Charter and defying the principles of the Helsinki Final Act, Russia’s forces have laid waste to entire cities, plundered Ukraine’s assets, and tried to strip its people of their independent identity.  In the last six months, Russia has forced more than 13 million people from their homes.  It has damaged or destroyed more than 323 hospitals and medical facilities.  More than 260,000 of Ukraine’s children have been forcibly moved by Russia into Russia to be either adopted or assimilated.  More than 116,000 square miles of Ukraine have been mined or contaminated with unexploded ordnance, amounting to approximately 27 percent of Ukraine’s territory.  We still do not know the exact number of Ukrainian citizens who have been forcibly deported, tortured, raped, or killed by Russia’s forces.  What we do know with absolute certainty is that the impact of this war will be felt for many generations to come.

Each week has brought new horrors, new evidence of inhuman behavior, and fresh reports of war crimes.  In a recent visit to Kharkiv, Human Rights Watch described how “Russian forces had pummeled Kharkiv and surrounding areas, attacking densely populated residential neighborhoods.”  Five attacks are reported to have damaged hospitals.  According to the Kharkiv region’s deputy prosecutor, at least 1,019 civilians have been killed, including 52 children, and 1,947 others wounded, including 152 children, during the hundreds of attacks by Russia’s forces over the last six months.

Russia’s victims in these attacks include a 63-year-old man taking a walk in a park, killed when Russia’s bombs hit Kharkiv’s August 23 Square.  Only a kilometer away, a woman who had just started a new job at a salon recounted how her 4-month-old baby and husband, who had come to take her home, were killed in front of her eyes by a Russian strike.

After six months of full-scale war, we have also witnessed the absolutely appalling conditions in the territories temporarily controlled by Russia.  Starvation, disease, filtration operations, and makeshift “torture chambers” have all followed in the wake of Russia’s advance.

Russia’s own soldiers have described what life is like in these cauldrons of evil, where their forces have run wild like a marauding horde.  Pavel Filatyev was a Russian paratrooper serving in the 56th Guards air assault regiment deployed to Kherson.  Filatyev describes how Russia’s Airborne Troops – the elite of Russia’s armed forces – captured the Kherson seaport and immediately began looting whatever goods they could find.  They ransacked kitchens for food.  In his words, “Like savages, we ate everything there: oats, porridge, jam, honey, coffee … We didn’t give a damn about anything, we’d already been pushed to the limit…What a wild state you can drive people to by not giving any thought to the fact that they need to sleep, eat and wash… Everything around gave us a vile feeling; like wretches we were just trying to survive.”  Filatyev said he believes that Russia’s war is “failing not only because the government has stolen everything, but because we, Russians, don’t feel that what we are doing is right.”  As he put it, “they simply decided to shower Ukraine with our corpses.”

In the areas where Russia has gained temporary control, it is not therefore surprising that criminality and gangsterism have flourished.

Take for example one underworld thug in Donetsk known as “Chort” or Devil.  A black-market counterfeit vodka baron, he is believed to be one of the main backers of the Russian Orthodox Army, a military unit sent by the Kremlin to fight in Mariupol.  Another crime kingpin, a tobacco smuggler known as “Prokop,” reportedly handpicked his associates to sit on the so-called DNR “parliament” while staffing it’s military with his own loyal gunmen.

The criminality that runs rampant in these areas has impacted everyone, including women and girls.  UN agencies have confirmed cases of rape, gang rape, torture, forced public stripping, and other forms of sexual violence.  However, we know this is not limited to the hundreds of reported or the dozens of confirmed cases.  Many survivors are not in a position to formally register incidents with authorities for myriad reasons, including but not limited to active hostilities, the lack of security in Russia-controlled areas, lack of trust in Russia’s proxy law enforcement, mass displacement, and, of course, the stigma and repercussions associated with reporting sexual violence.

The situation in the temporarily controlled territories also has the potential to take an even darker turn.  We all remember how Russia’s forces drove into the Chernobyl exclusion zone and started digging trenches, seemingly oblivious to the toxic dust they were breathing in themselves.  Now we have Russia’s troops inside Europe’s largest nuclear power plant.  Commercial satellite imagery has again belied Russia’s official narrative, showing Russian military vehicles on the premises of the plant.

We demand Russia stop trying to hold the world hostage at Zaporizhzhya and immediately hand full control of it and all nuclear facilities in Ukraine back to their rightful sovereign owner.  A visit by the International Atomic Energy Agency to Zaporizhzhya can no longer wait.  The IAEA and the UN have assessed that they have in Ukraine the logistics and security capacity to be able to support an IAEA mission to the power plant from Kyiv.  It is clear to all, despite what you hear from Russia’s propagandists, that Russia is the real obstacle to this visit.  Russia alone created the risk of nuclear disaster when it launched a full-scale invasion, and it must eliminate those risks now by withdrawing and allowing the IAEA visit to move forward.

Mr. Chair, as the Kremlin tries to turn back the clock on Ukraine’s independence, as my Ukrainian friend and colleague has pointed out, the lexicon of the last century is rearing its ugly head.  Filtration.  Purges.  Resettlements.  Re-education.  Dissidents.  Gulags.  Just as the hammer and sickle are reappearing in the so-called DNR and LNR, so too are the practices of the past.  Russia has now ramped up its disinformation campaign by preparing to stage show trials in Mariupol.  Iron cages to hold Russia’s captives during these sham trials are reportedly being assembled on the stage of the Mariupol Chamber Philharmonic.  How emblematic is it that Russia is working to transform a majestic center of Ukraine’s arts and culture into a macabre theater for its craven despotism.  Through this kind of intimidation and propaganda, Russia is once again trying to lay the foundation to illegally annex territory from Ukraine by force.

President Biden has made it clear that the United States and our partners from more than 50 countries will continue for as long as it takes to provide vital security assistance to Ukraine’s forces as they defend their country from Russia’s aggression.  Since the beginning of the Biden Administration, the United States has provided approximately $10.6 billion in total U.S. security assistance, including ammunition, weapons, and equipment that Ukraine is using to great effect to defend itself, and we will continue to do so as long as Russia continues its unprovoked and brutal assault on Ukraine.

Mr. Chair, despite six months of Russia’s war to colonize Ukraine, the people of Ukraine have shown that they cannot and will not be conquered.  Despite the enormous costs, they are determined to remain sovereign and independent.  Harkening back to their grandfathers’ and great-grandfathers’ fight against invading forces, Ukraine’s citizens are courageously defending their cities and neighborhoods against the Kremlin’s aggression.  Ukraine’s forces are making tremendous use of the military assistance they are receiving and pushing back Russia’s demoralized forces as described by Pavel Filatyev, who are treated as nothing more than cannon fodder, pushed into a foreign conflict for no purpose other than to subjugate an independent people and deprive them of their liberty.  The courage, spirit, and strength of Ukraine’s military and its people is becoming more evident and more extraordinary with every passing day.  Today, as the United States has and will continue to do, we stand with a sovereign, democratic Ukraine as it celebrates and defends its independence.  Slava Ukraini.