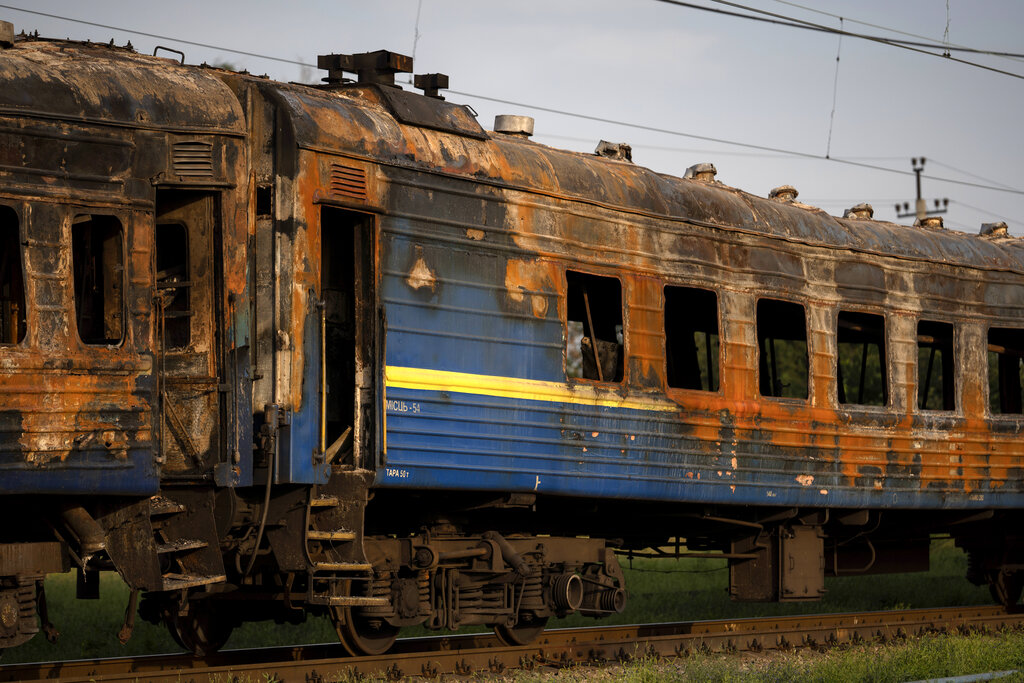 A heavily damaged train is seen at a train station after a Russian attack Wednesday during Ukraine's Independence Day in the village Chaplyne, Ukraine, Thursday, Aug. 25, 2022. (AP Photo/Leo Correa)

Last week, on the very day we gathered in this room to celebrate 31 years of Ukrainian independence from the Soviet Union’s repressive dictatorship and to mark six months since Russia launched its brutal war of aggression, Russia’s war machine continued its unconscionable campaign of death and devastation against democratic Ukraine and its people.  Last week, at southeastern Ukraine’s Chaplyne train station, Russian missiles turned train cabins into twisted metal tombs, killing at least twenty-five and injuring dozens of others.  Among the dead, five people were reportedly burned to death, including two children – boys of just six and eleven years old.  Russia’s representative may want us to believe that this strike was on a military target, but reporters on the ground confirm there were no indications of Ukrainian troops among the dead.  No, all indications are that this attack took place and those civilians died simply because Russia cannot abide by a sovereign and democratic Ukraine.  As one of Russia’s mercenaries made clear in a video recording earlier this week widely circulating on social media, Russia aims not at demilitarization but at the complete and utter destruction of Ukraine.  It’s that simple.

Russia’s violent attacks are just one facet of its blood-stained scheme to dismantle Ukraine.  Implementing a well-worn playbook – one it has used time and time again – Russia has been installing illegitimate proxy officials in Russia-held areas of Ukraine.  The goal is clear – to stage sham referenda in a brazen attempt to justify the unjustifiable: Russia’s forcible seizure of parts of Ukraine’s sovereign territory, with the goal of annexation by force into the Russian Federation.  We have information that Sergey Kiriyenko, the first deputy head of Russia’s presidential administration, is responsible for overseeing these newly-controlled Ukrainian territories, and that the Kremlin is already vetting candidates to serve as administrators of these territories.  Of course, these candidates are mostly recruited from Russia given the dearth of locals willing to serve as traitors to their own country.  Using force to seize another state’s territory, and then conducting sham elections on that territory, are – needless to say – blatant violations of the UN Charter and grave contraventions of the Helsinki Final Act principles of respect for the sovereignty and territorial integrity of states.

Our information also indicates Russia’s officials are concerned that there will be low voter turnout in these sham referenda.  This is of course hardly surprising given the brutality of Russia’s military campaign and widespread opposition to Russia’s attempts to colonize Ukrainian land.  And we believe Russia’s officials know they are hated in Ukraine.  They know it very well.  Last month, the Kremlin was debating whether to halt the Russian proxies’ seizure of businesses in occupied areas of southern Ukraine until Russian-installed local administrations could be legitimized, probably out of concern that the constant seizure of property and businesses was feeding anti-Russian sentiment and benefiting Ukrainian resistance.  In fact, according to local polling, more than ninety percent of Ukraine’s citizens have said their opinion of Russia has plummeted since the start of Russia’s invasion.

Mr. Chair, Russia understands it can only achieve the outcome it wants by deploying puppets to manufacture an outcome that is completely divorced from the genuine will of Ukraine’s citizens.  We know these sham referenda are garbage because we know the Kremlin has already decided their outcome.  As of late June, Russia was considering setting up a referendum in the so-called Donetsk People’s Republic.  It is believed that for Russia, the referendum would need an 80 percent turnout of the total number of voters to be considered legitimate and a 90 percent approval rate to be considered successful.  The whole world can see the strings reaching back five hundred miles to the puppet masters in Moscow.

Any Kremlin claims that Ukraine’s people yearn to be annexed by Russia are flat-out lies and propaganda.  Transparent and free opinion polling prove the exact opposite.  According to a University of Chicago survey, an overwhelming number of Ukrainian citizens oppose Russia’s aggression and occupation.  Ninety-seven percent of Ukraine’s people see Russia’s invasion as the major threat to Ukraine’s security, with the same percentage wanting Russia to compensate Ukraine for the death and destruction it has caused.  Now, the overwhelming majority of Ukraine’s citizens see their future as separate from Russia’s.  Just three percent of Ukraine’s citizens want Ukraine to join the Russia-led Eurasian Customs Union, with ninety percent wanting Ukraine to become an EU member state.  With numbers like this, it’s clear why Russia is desperately working to manufacture a “Potemkin” referendum.

We also cannot forget Russia’s policy of using “filtration camps” – at last count, more than 20 had been stood up – to purge the territories it controls of patriotic and civic-minded Ukrainian citizens using torture, sexual violence, forced disappearances, and other barbaric practices.  All told, Russia’s forces and their proxy thugs have interrogated, detained, and forcibly deported into Russia’s territory an estimated 1.6 million Ukrainian citizens, including 260,000 children.  It therefore defies comprehension that Russia would ask the world to believe in the propriety of any referendum conducted after a campaign of mass deportation of those very people who disagree with the Kremlin’s desired outcome.

Mr. Chair, we have seen this before.  We saw it in occupied Crimea and Russia-controlled parts of eastern Ukraine, where Moscow staged similar sham referenda.  We condemned those coercive actions then and we continue to condemn them now.  Those referenda quite simply had no legitimacy whatsoever.  It is crystal clear that any future sham referendum organized at gunpoint will equally lack legitimacy.  The United States has never, and will never, accept Russia’s purported annexation of any part of Ukraine.  Ever.  And we will give Ukraine the security assistance it needs to win this war and drive out Russia’s troops, proxies, and puppets.  Ultimately, Russia will fail and Ukraine will prevail.