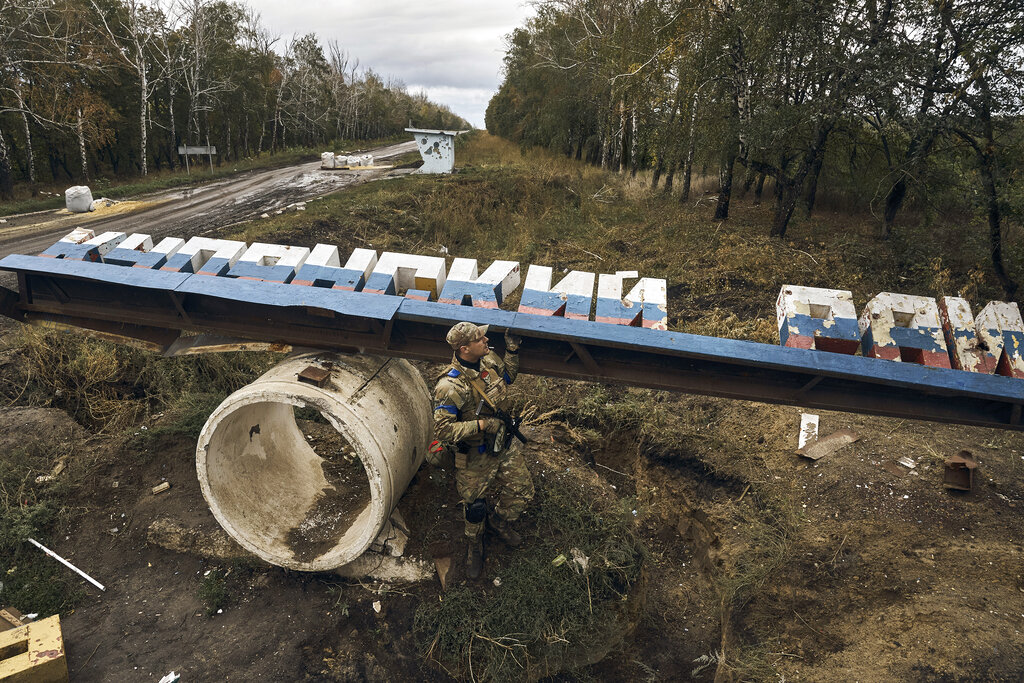 to the Permanent Council, Vienna
September 15, 2022

The Russian Federation is a massive country spanning 11 time zones, with a population many times the size of Ukraine’s.  It has many more tanks, missiles, and artillery pieces than Ukraine.  Its armed forces are significantly larger than Ukraine’s.  But, after more than 200 days of war, what Russia still lacks is any valid reason for attacking Ukraine or annexing its land.  That is why Russia is losing this imperial war of conquest.  Russia’s forces lost the battle of Kyiv in March, and now we see them abandoning their tanks and BMPs and running – sometimes literally – back to Russia as Ukraine’s defenders liberate communities that have suffered grievously under Russia’s oppressive occupation.

The sight of Ukrainian civilians of all ages greeting Ukrainian liberators with tears of joy stands in stark contrast to the angry demonstrations that greeted Russia’s forces when they first occupied Ukrainian towns and villages this past winter and spring.  No matter where you are from or what your political views, in every culture around the world an armed invader that comes to take your land and kill your family is despised.  Russia’s forces are widely despised across Ukraine: from north to south and east to west.  And they know it, and that is why they are running as fast as they can.  Mayor Ivan Fedorov, who movingly addressed this Council earlier in the war, has reported that Russia’s occupiers are currently fleeing his hometown of Melitopol, only kilometers from the Azov coast.

Why is this happening so quickly?  It boils down to one simple distinction: Russia’s forces, who know they are being treated like cannon fodder by their own government, don’t have the will to fight, except maybe for rubles, and perhaps a washer or an extra television set looted from a Ukrainian home, while the people of Ukraine are fighting to defend their families and their freedom.

As Russia’s soldiers beat a hasty retreat, their commanders still show no sign of respect for civilian life and inflict horrific death and destruction on Ukraine.  Only this week we witnessed the widespread bombing of critical civilian infrastructure in various parts of Ukraine, drastically limiting electricity and water to homes and healthcare facilities.  The bombing of the dam that was just mentioned by my Ukrainian colleague.  And as the occupiers withdraw, there are again harrowing reports emerging of sadistic treatment and summary executions of prisoners.

On Tuesday, police in the newly liberated city of Balakliya reported that Russia’s troops, who in March had taken over the town’s police station, had set up “a torture chamber” there.  A Washington Post reporter wrote that “scratches on the walls marked how many days they were jailed, zip ties scattered on the ground and chairs lined up against a basement wall showed where they probably had been interrogated or worse.”  There are accounts of people being subjected to electrical shocks, and many more reports of screaming that went on day and night, and people who were never seen again.  All this barbarism reflects the elaborate system of holding cells and camps that Russia’s forces euphemistically call a “filtration” process.  We have seen numerous reports that those who are “filtered” are often horribly mistreated.

In the coming days and weeks, we must redouble efforts to search for evidence of war crimes and other atrocities.  We must also continue to provide humanitarian assistance and support to help address the harm done to survivors of Russia’s latest attempt to subjugate the people of Ukraine.  Unmarked graves have already been discovered as Ukraine’s counter-offensive reclaims more land and exposes the brutal ways of Russia’s invading forces.  Lesia Vasylenko, a member of Ukraine’s parliament, spoke of discovering the beheaded bodies of members of Ukraine’s military, human feces everywhere, widespread looting, and terrorized children who were still too scared to leave their basements.  “Liberation uncovers many crimes,” she said.  “It’s as if we are on the verge of hundreds, if not thousands of Buchas, just of a smaller scale.”

Mr. Chair, now is not the time to let up on our support for Ukraine.  People who have suffered unspeakable horrors are now finally glimpsing some normalcy.  As President Zelenskyy said: “It is very important that together with our troops, with our flag, ordinary, normal life enters the de-occupied territory.”  Pension payments are again resuming, law and order are being restored, and the criminal structures that flourished under Russia’s occupation are being pushed back into Russia.  Oleksander Hostrovykho, who lives in the liberated village of Verbivka, put it this way:  “We can sleep at night not even being afraid…Morning comes, and it’s just beautiful quiet.”

To expand and make permanent this “beautiful quiet,” Ukraine needs our continued and unwavering support because make no mistake: the Kremlin is still fully determined to dissolve Ukraine as a geopolitical entity, even as it reels from Ukraine’s remarkable counter-offensive.  According to the Institute for the Study of War, recruitment centers across Russia have recently been delivering pseudo-summonses that look like conscription notices as part of what it calls a “crypto-mobilization.”  While this campaign is likely to fail, Russia is sparing no effort to throw more bodies and weapons at Ukraine.  It has desperately approached its few remaining allies, such as North Korea, Syria, and Iran, to ask for additional weapons.

Russia’s members of parliament are now openly calling for systematic targeting of civilian infrastructure – in other words, publicly calling for acts that could constitute war crimes or crimes against humanity.  That is why now is no time to relent.  I can assure this Council that my own country is prepared to stay the course for as long as it takes.  To date, the Biden administration has provided over $15 billion in security assistance to Ukraine.  And let me be crystal clear: we will provide more.

Mr. Chair, we have seen not only incredible bravery and determination exhibited by Ukraine’s armed forces, but we have seen them quickly learn how to use the military assistance they have received to maximal effect.  I know this also from personal experience: as a senior Pentagon official I oversaw our training program in Ukraine, and for many years now it has been clear that Ukraine’s soldiers are quick to learn and eager to adapt and modernize their force to western standards.  On the other side of the ledger, as Ukraine’s former defense minister Andriy Zagorodniuk has aptly put it, “the Russian military suffers from endemic corruption, low morale, and poor leadership, with individual initiative in short supply and commanders deeply reluctant to accept personal responsibility.”  So let us all stay the course and continue to provide Ukraine with the arms and other means to defend itself and ensure a decisive victory, to put an end to the torture chambers and finally bring about a “beautiful quiet.”

Finally, Mr. Chair, a word about the current situation at the Zaporizhzhya Nuclear Power Plant.  Russia continues to play with fire, endangering the security of the world by holding a plant they have no right to be in.  Russia’s forces must leave the Zaporizhzhya Nuclear Power Plant immediately and allow Ukrainian operators to restore the nuclear safety and security of the plant.  This too is a reminder that European security depends on driving Russia’s forces out of Ukraine and supporting Ukraine’s sovereignty and territorial integrity within its internationally recognized borders.