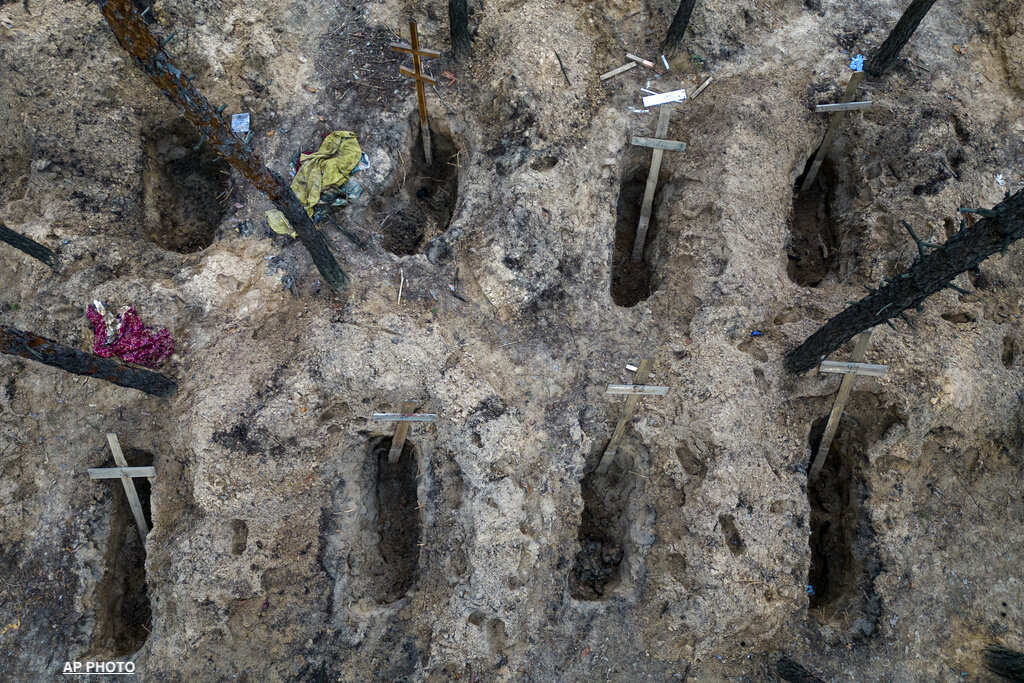 A view on exhumated unidentified graves of civilians and Ukrainian soldiers in a cemetery in the recently retaken area of Izium, Ukraine.(AP Photo/Evgeniy Maloletka)

Over the last week, as we saw Russia’s soldiers fleeing before Ukraine’s advancing forces, some of our worst fears for Russia-controlled areas of Ukraine were realized.  Wherever Ukraine liberates its territory, we see the horrors Russia leaves behind in its wake.  The latest discovery of over 440 bodies in a mass grave in Izyum is further evidence of this.  Reports indicate some of Russia’s victims suffered torture before dying.  Some showed signs of strangulation, ropes around their necks.  Hands tied behind their backs.  As Ukraine liberates more of its land, we must brace ourselves for similar discoveries and continue our work to ensure Russia is held accountable.  Colleagues, it is human instinct to turn away from such horrors.  Don’t.  Expose these atrocities.  Speak publicly about them.  Think about the families who have suffered, as described by my Ukrainian colleague just now, and those who are about to suffer in the coming days and weeks, and resolve to say and do something about it.

As Russia’s war of choice continues, we need to remember the many ways its violence inflicts pain and suffering on everyday civilians.  Russia’s war has stolen a normal childhood from a generation of Ukraine’s youth.  Rather than having the opportunity to dream about and prepare for their futures in peace, Ukraine’s youth must learn to survive by identifying the sounds of sirens, rockets, and gunfire.  Take Tatiana Monko and her daughter Darinka.  They returned to their ruined house in Bucha, feeling lucky to have survived.  They were relieved, if surprised, to find that Darinka’s prized possession, her piano, had somehow made it through the attack.  The piano was still decorated with the ten-year old’s multiple awards and medals for her performances.  Yet for some reason, five of the piano keys did not work.  The reason?  A Russian grenade had been planted in Darinka’s piano, waiting to kill her after she returned home to play.

Fourteen-year-old Stepan spent his birthday in a basement, hiding with his family from a Russian air attack.  A time meant for celebration was instead spent watching from a small underground window as flames licked the walls of his nearby school.  After 12 hours of bombing, the school’s windows were blown out, the grand, three-story façade pockmarked with violence.  “Success in learning, success in life,” the motto inscribed above the building’s entrance said, now a charred ruin.  2,500 educational institutions in Ukraine were damaged due to bombing and shelling by the armed forces of the Russian Federation.  Of them, 289 were completely destroyed.

While Darinka and Stepan survived, many children tragically have not.  389 children have died and 756 have been wounded in the course of Russia’s aggression.  And UNICEF believes the true number is actually much higher.  The children, like young Darinka and Stepan who do survive Russia’s violence, will carry the emotional and psychological scars of this trauma for a lifetime.

Children continue to also be a prime target in Russia’s filtration efforts.  Russian officials and proxy authorities in Russia-controlled areas of Ukraine move forward their monumental social engineering effort to “filter” the population as a means of suppressing Ukrainian resistance and ensuring loyalty among the remaining population.  Filtration operations often result in forced deportations of Ukrainian citizens to Russia, detentions, and other abuses.  As part of this effort, the United States has information that over the course of July, thousands of children were transferred from Russia-controlled areas of Ukraine to Russia.  Some of these children have no identity documents or information on the location of their parents.  They have been torn from their families by the Russian state – the same state whose representatives sit here at this table and prattle incessant lies and propaganda.

To facilitate the forced deportation and resettlement of children, officials in Russia-controlled areas of Ukraine are developing administrative arrangements to place orphans with families in Russia, in collaboration with Russian executive agencies.  Once in Russia, reports indicate that Ukrainian children undergo what Russia refers to as psychological “rehabilitation” and are forced to complete unspecified educational projects.

Mr. Chair, we must promote accountability for Russia’s actions, and the United States is acting in coordination with partners to do just that.  Last week, the United States imposed sanctions on a Russian military intelligence agency and individuals connected to human rights abuses, both in the Kremlin’s war against Ukraine and within Russia itself.  This included the designation of human rights abusers, such as Maria Lvova-Belova.  Lvova-Belova is Russia’s so-called Presidential Commissioner for Children’s Rights and, working directly under Putin, has led Russia’s efforts to deport thousands of Ukraine’s children to Russia.  Her efforts include the deliberate removal of Ukrainian children by Russia’s forces, the forced adoption of Ukrainian children into Russian families, the so-called “patriotic education” of Ukrainian children, and overseeing legislative changes to force Russian citizenship on these children.  The United States will continue to take actions against those who support these kinds of gross human rights abuses, and against those who support Russia’s attempts to legitimize its seizure of Ukraine’s territory, wherever they may be.  We applaud those who have already done the right thing and acted against Lvova-Belova and her ilk.  For those countries who have not, we urge you to join us on the right side of history and act now.

Mr. Chair, I also want to take a moment to address three other important issues.  The first is the announcement that Russia’s proxies in Ukraine will hold sham referenda on joining Russia as the Kremlin desperately pursues a mobilization to deploy more young Russians as cannon fodder into Ukraine.  We’ve seen such fraud before, and we know how it will end.  Russia has repeatedly exploited phony “electoral” processes in an attempt to lend a semblance of legitimacy to its campaign of subjugation via puppets and proxies.  We saw this repeatedly in 2014, as the Kremlin orchestrated so-called referenda in the Ukrainian regions of Crimea, Luhansk, and Donetsk.  Each referendum resulted in faked high percentages of public support.  We know, however, that Russia has almost no support in southern and eastern Ukraine and is now being driven out of this territory.  The United States will never recognize such cheap parodies of the electoral process, and we must all continue to make clear that such propaganda stunts will never be recognized as legitimate.

Second, and yet another travesty of justice, as my Ukrainian colleague just mentioned, a kangaroo court in Russian-occupied Crimea yesterday sentenced Crimean Tatar deputy Mejlis head Nariman Dzhelyal, as well as his co-defendants Asan and Aziz Akhtemov, to 17, 15, and 13 years in prison respectively.

Finally, we are also appalled by reports that Russia’s proxies in the Ukrainian region of Luhansk have sentenced OSCE staff members Maxim Petrov and Dmytro Shabanov to 13 years in prison.  This is a travesty of justice and completely unacceptable.  I join OSCE Chairman Rau in calling this “pure political theater.”  No one, anywhere, should be targeted based on their unbiased and loyal service to this Organization, especially while carrying out duties mandated by all 57 participating States.  And that includes Russia.  Think about this: while one group of Russian mouthpieces sits in this Council, another group is imprisoning the staff who work for this Organization.  It is simply appalling.  We call on Russia and its proxies to release these individuals now.  Immediately.