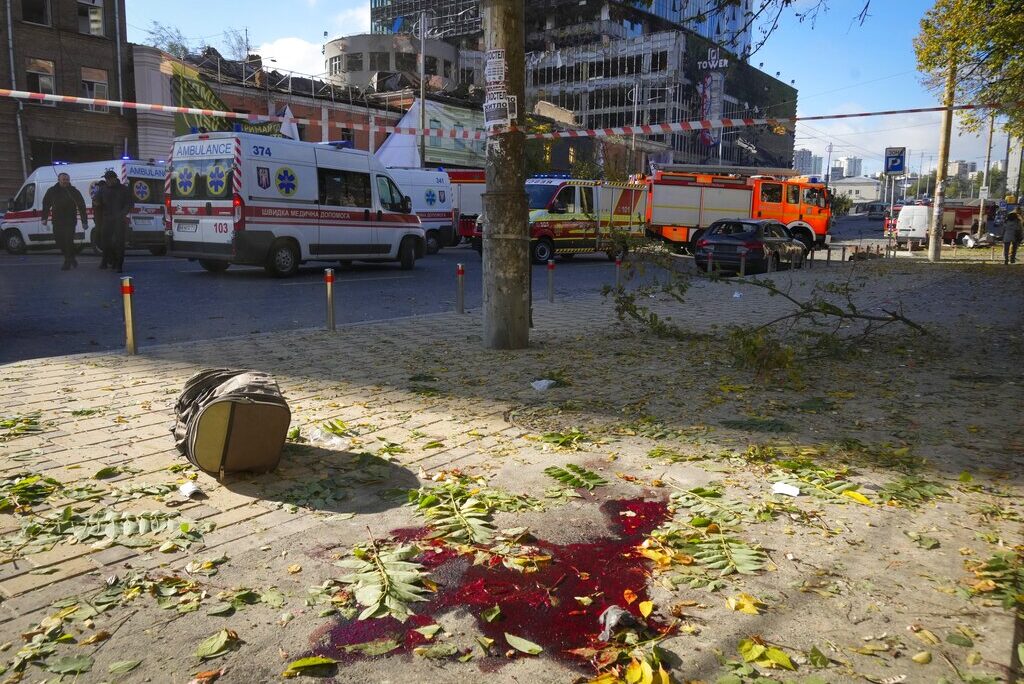 Blood on the ground at the scene of Russian shelling, in Kyiv, Ukraine. (AP Photo/Efrem Lukatsky, File)

The last few days have continued to lay bare the barbaric nature of Russia’s war against Ukraine. Electricity stations, apartment blocks, parks, playgrounds, and heating facilities have been attacked far from the front lines, with civilian casualties reported across the entire country.  One of the striking facts about this latest wave of attacks is that so many of the targets had absolutely no military value whatsoever.  Another is that these attacks largely coincided with the morning rush hour, maximizing civilian deaths. Yet this is apparently exactly what was intended since the Russian leadership has informed us that everything went according to plan.  Former Russian President Dmitry Medvedev crowed that this was just the “opening act,” while President Putin praised the strikes as a mission accomplished.

No one can witness this carnage and not be moved.  No person or country can equivocate in the face of such brutality.  No one should remain silent in the face of such horrors.  It should be patently obvious by now that the Russian government cannot tolerate the fact that it is losing this war to Ukraine and has chosen as a result to lash out violently at the expense of yet more civilian lives.  There are sadly many new victims across Ukraine, including in major cities like Kyiv, Lviv, Dnipro, Sumy, Mykolaiv, and many other places.  The attacks Sunday and yesterday have spread death and fear across Ukraine.  But there is no path to victory for Russia.  This  is simply evil set in motion.

Last week, we heard a firsthand account from Olena Zhuk of the Russian Federation’s ongoing strikes hitting civilians.  Ms. Zhuk described how the Kremlin’s missiles had rained down on Zaporizhzhya only six hours earlier.  While Ukraine’s citizens in Zaporizhzhya were sleeping soundly in their beds, this barrage of missiles slammed into residential apartment buildings, killing at least 11 people and burying many others in rubble.  More than 40 residential buildings were damaged in this attack, apartment blocks crumbling, illuminated from within with fire.

This past Sunday morning, Putin’s forces yet again destroyed residential buildings in Zaporizhzhya at two o’clock in the morning while residents were sleeping.  According to reports, 13 people were killed and more than 60 wounded in these heinous attacks.  Among these, 10 were children.  Survivors of these strikes describe their harrowing experiences.  After waking to sirens and explosions, Kateryna Ivanova and her family hid in fear in their bathroom as their apartment quickly filled with smoke.  Somehow escaping into the street, Ivanova said she was met by a neighbor who was screaming inconsolably over the death of her husband.  This being only one of many hundreds of tragedies unfolding across Ukraine.

I want to remind this Council, as had already been said: Intentionally targeting civilians and civilian objects is a war crime. Vengeful attacks on cities and their civilian populations are war crimes.

The United States condemns in the strongest possible manner the Kremlin’s ongoing, cowardly attacks hitting civilians and civilian infrastructure.  We also call out Belarus for its ongoing complicity and support for Russia’s military forces and for its unfounded accusations that Ukraine is allegedly planning an attack on Belarus.  Given Belarus’ consistent lies in this Council, beginning with the invocation of the Vienna Document before the start of the war, these unfounded allegations can only signal one thing: ill intent.  Belarus must stop enabling and supporting Putin’s war of aggression.

As for my country, I want to assure you that the United States will continue to provide vital economic, humanitarian, and security assistance toUkraine so that it can defend itself and repel the invaders who trespass on its territory.  We call on this organization, OSCE, to continue documenting Russia’s mass atrocities in Ukraine so there can be no impunity for these cowardly, barbaric actions.  We will also continue to work with our international partners to impose crippling costs on Russia’s economy until the war is over and Ukraine has secured victory.