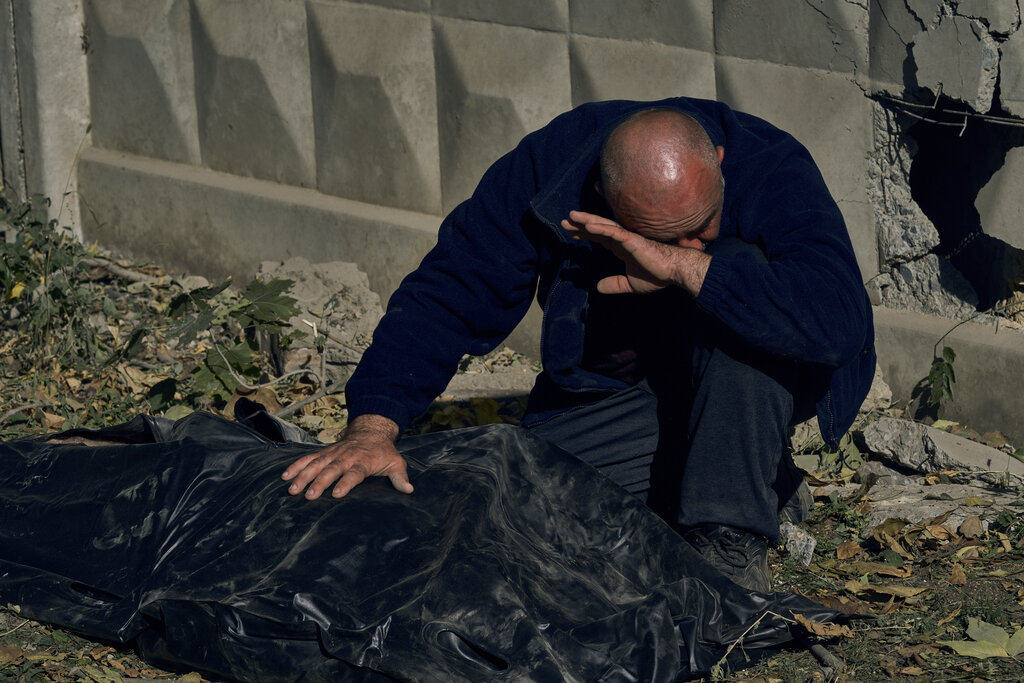 A man reacts near the body of his cousin, killed in a Russian rocket attack in Mykolaiv, Ukraine, Thursday, Oct. 13, 2022. (AP Photo/LIBKOS)

As we take stock of the horrific attacks against civilian infrastructure in Ukraine over the course of the last week, we must never lose sight of the fact that the Kremlin’s aim from the very beginning of this war – in fact before it even launched the war on February 24 of this year – was to eliminate democratic Ukraine as an independent state with its own national identity and replace it with a Russian-imposed one.  This is the purpose of Russia’s “filtration” operations, the essence of its so-called “de-Nazification” goals, and the rationale for its re-education policies in the areas of Ukraine it temporarily controls.

One of Russia’s proxy officials in the so-called “DNR,” Pavel Gubarev, has articulated this aim rather succinctly.  Addressing the people of Ukraine in a video posted this week, he said “We aren’t coming to kill you, but to convince you.  But if you don’t want to be convinced, we’ll kill you.  We’ll kill as many as we have to: 1 million, 5 million, or exterminate all of you.”  We have heard such murderous intent expressed by various Russian proxy officials and TV propagandists in the past.  Such statements should never be dismissed.  Such unabashed support for mass extermination must be taken seriously.  And every participating State seated at this table has to ask itself what we are going to do about it.  Because while Russia’s sights are trained squarely on Ukraine, how many other OSCE participating States that emerged from the Soviet Union can say with certainty that such murderous intent could never be visited on their societies?

As Ukraine continues to successfully sweep back Putin’s dark curtain of occupation and oppression, we are yet again tragically seeing new evidence of the Kremlin’s depravity.  Following Ukraine’s liberation of Lyman, the city joined the growing list of places with evidence of mass killings and torture by Russia’s forces.  Two burial sites in Lyman, including one mass grave reportedly containing the remains of about 200 civilians, have been discovered over the last week.  Horrifically, whole families, including those with young children, have been discovered in this mass grave.  This brings the gruesome total number of confirmed dead from the Kremlin’s temporary control of the Kharkiv region to at least 530.  This is just for the Kharkiv region.  Of these, 19 were children.  Last night again we saw shelling of a market in Avdiivka, seven killed, eight wounded.

These same tactics were on full display earlier this week as Putin launched cowardly attacks on civilian infrastructure in Ukraine, striking residential neighborhoods and civilian infrastructure.  What did Putin’s missiles hit?  Power plants.  Communications infrastructure.  A museum to Ukraine’s most esteemed poet.  A university.  A playground.  A popular pedestrian bridge in Kyiv.  All of these targets are civilian infrastructure.  We know that the Russians have perpetrated a campaign that, in many of these cases at least, has intentionally targeted civilians.  That is the very definition of a war crime.  That is why we have been clear, as have allies and partners around the world, that Russia’s forces have engaged in war crimes.  And yesterday’s vote in the UN General Assembly, by an absolutely resounding  margin of 143-5, condemning Russia’s violations of the UN Charter, shows just how isolated Russia is on the global stage.

Yet President Putin and his cronies in the Kremlin seem to relish taking every opportunity to demonstrate their willingness to violate international norms.  We have spent countless months listening to the disinformation and outright lies from the Kremlin’s propagandists — even in this room — as they attempt to justify their war of aggression.  I’m quite certain we’ll hear more of this nonsense later today.  If some of their twisted arguments sound familiar, however, there is a good reason for that.  The Kremlin reflexively accuses its critics of all the same abuses its forces are committing.  The Kremlin’s propaganda has not changed all that much over the decades.  As evidence of this, Vaclav Havel once said about Soviet imperialism, and I quote, “the expansion of imperial influence is presented as support for the oppressed; the lack of free expression becomes the highest form of freedom; farcical elections become the highest form of democracy; banning independent thought becomes the most scientific of world views; military occupation becomes fraternal assistance.”  But in spite of this, I look forward to hearing the Russian representative today explain why 143 countries voted against Russia and only the darkest of dictatorships – Belarus, North Korea, Syria and Nicaragua – sided with Moscow’s neo-colonialist war.

Mr. Chair, just as Vaclav Havel was a symbol in his day of the power of the individual against an oppressive and dehumanizing system, so now is the Russian pro-democracy activist Vladimir Kara-Murza.  His bravery and sacrifice in confronting injustice and tyranny was recognized this week, deservedly, when he received the tenth Vaclav Havel Human Rights Prize from the Council of Europe’s Parliamentary Assembly.  Kara-Murza faces the prospect of potentially decades behind bars on spurious charges for his principled activism, including heartbreakingly his advocacy for the release of hundreds of other political prisoners held by Russian authorities.  In the same vein, last week’s Nobel Peace Prize highlighted the irrefutable power of independent civil society to stand up for truth, justice, and accountability in the face of evil.  We warmly congratulate human rights advocate Ales Bialiatski from Belarus, the Russian human rights organization Memorial, and the Ukrainian human rights organization Center for Civil Liberties for receiving this year’s award.   They continue to shine a bright light on the path forward during a time of great adversity.  Their life’s work is supporting a sovereign and independent Ukraine, a sovereign and democratic Belarus, and a Russian state that one day will come to terms with its totalitarian past, reject authoritarian repression and aggression, and join the community of the world’s rights- and rules-respecting countries.

To support the sovereignty and freedom of every country to determine its own future, the United States will continue to provide Ukraine with more weapons to defend itself, rally other freedom-loving countries to join us at the next Ukraine Defense Contact Group meeting, and work with our partners to impose even more crippling sanctions on Russia’s economy for its war of choice.  We will stand with democratic Ukraine for as long as it takes, and we will be there for a victorious Ukraine as it rebuilds and realizes the aspirations of its people for a bright future within the Euro-Atlantic community.