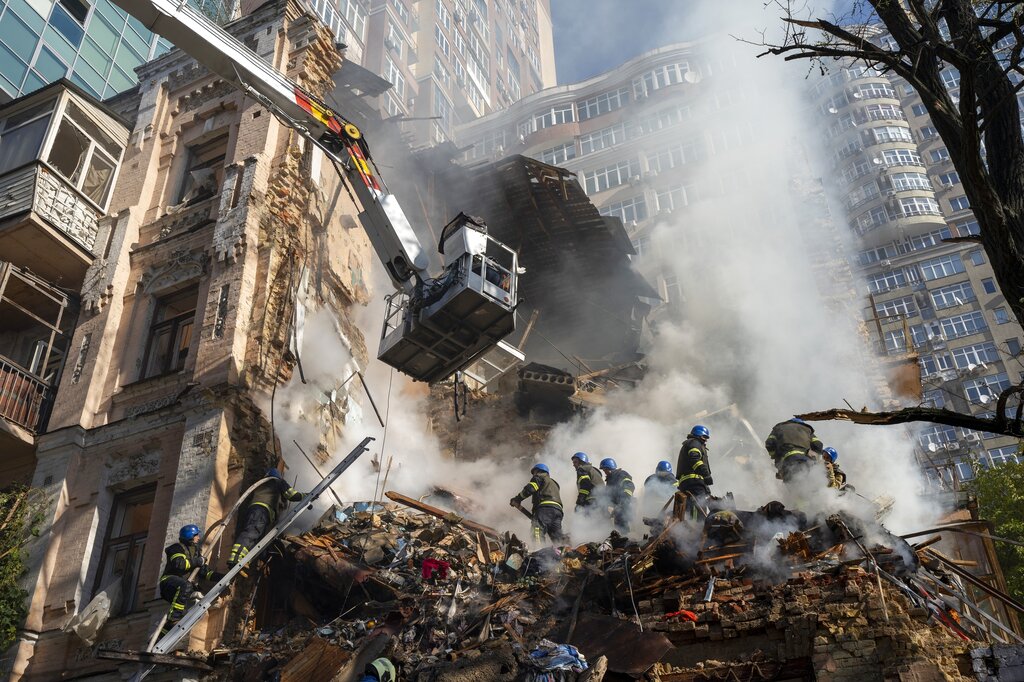 Over the last two weeks, the international community has delivered a clear message to the Russian leadership: end your campaign of ruthless violence against Ukraine.  Stop the attacks on energy facilities, like those conducted against Kryvyi Rih, which cut power to villages, towns, and an entire city district.  Stop the shelling that has left people without water and heat as temperatures drop.  Stop the nearly two-week long missile and kamikaze drone barrage on Ukraine’s critical infrastructure, destroying one third of Ukraine’s power stations and causing massive nationwide blackouts.  Stop the attacks on power supplies for hospitals, schools, and nuclear power plants.  These calls have been echoed here and at the UN, where Russia has been isolated by the entire community of civilized nations.  Yet Russia’s contempt for the international community and its norms of civilized behavior continues unabated.

Mr. Chair, while all of us in this Council are no doubt shocked by what we see, who among us can be surprised?  Russia is using the same tactics today that it used in Chechnya and Syria, where together with its allies Iran and Lebanese Hizballah, it supported a ruthless air campaign that brutally leveled entire cities, like Aleppo, to rubble.  We see these same tactics on display now.  On Monday, as Kyiv residents helped get their children ready for school, Iranian-made Shahed-136 kamikaze attack drones descended on critical infrastructure and civilian objects, causing significant destruction.  Among the targets were a thermal electricity station and a multi-story building housing Ukrenergo offices.  The transfer of these drones to Russia is a violation of UN Security Council Resolution 2231. Moreover, as we will never tire of repeating, the deliberate targeting of civilian infrastructure is a war crime.

Forced to retreat on the battlefield due to poor morale and planning, the Kremlin has doubled down on destroying civilian infrastructure with missiles and drones.  This is apparently a desperate attempt to freeze and starve the population of Ukraine.  The barbarity of this campaign is on display every day.  Russia’s forces reportedly attempted to coerce conductor Yuriy Kerpatenko into leading Kherson’s Chamber Orchestra in a propaganda performance to celebrate Russia’s occupation.  But Kerpatenko refused to be a mouthpiece for the Kremlin’s propaganda.  The response from Russia’s forces?  They silenced Yuriy Kerpatenko’s music by murdering him in his home.  These brutal killers, like all the others across Ukraine, must be held to account.  Meanwhile, as we have seen in the last few days, the Russian occupiers are rapidly retreating from parts of Kherson Oblast and have declared martial law in their temporarily occupied territories in a desperate attempt to impose order on a terrified and brutalized population.

Mr. Chair, Human Rights Watch has just released another report on the situation in Ukraine, this time on torture conducted by Russia’s forces against detainees during their six-month occupation of Izium.  Survivors described being subjected to electric shocks, waterboarding, severe beatings, threats at gunpoint, and being forced to hold stress positions for extended periods.  A senior researcher at Human Rights Watch noted “the cruel violence and abuse in Izium were not random incidents.  Multiple victims shared credible accounts with us of similar experiences of torture in facilities under the control of Russian forces and their subordinates, indicating this treatment was part of a policy and plan.”

The Kremlin’s ongoing scorn for the international community and the rules-based international order is evident in other ways too.  After the UN General Assembly voted overwhelmingly – 143 to 5 – to condemn the Kremlin’s purported annexations of Ukraine’s territory, Russia’s diplomats threatened to quit the Black Sea Grain Initiative.  Halting the deal’s weekly export of 1 million tons of grain going to countries most in need like Yemen, Djibouti, Lebanon, and Egypt, would be unconscionable.  And let us not buy the lie that Russian fertilizers and foods are not being allowed for export because they are.  This threat is simply another cynical ploy to wield global hunger as a tool of coercion.  Russia’s message is clear: Openly oppose this war and it will make sure your people go hungry.

This same callous contempt has been on full display as the Kremlin attempts to exploit Ukraine’s Zaporizhzhya Nuclear Power Plant for its own electricity production.  The Kremlin has continually resorted to the most irresponsible and dangerous actions around the plant, including shelling near the plant and now reportedly kidnapping and likely torturing ZNPP Deputy Director Valeriy Martyniuk, Assistant Director General Oleg Osheka, and Head of Information Technology Oleg Kostyukov.  The Kremlin’s drone attack on Monday on a Dnipro electrical substation cut the plant off from external power sources for the third time in a week.  It appears Russia is manufacturing these crises in a twisted and cynical attempt to allow Rosatom, an arm of the Russian government, to assume operational control of the plant.  These actions continue to be a reckless assault on our collective ability to prevent a nuclear disaster.  The Russian Federation must immediately withdraw its forces from these areas around ZNPP facilities and return full control of the plant to the competent authorities of Ukraine.

Finally, there is one other actor besides Iran that is helping Russia prosecute this war of aggression, and that is the Lukashenka regime in Minsk.  Lukashenka’s complicity in Putin’s war of aggression continues with the arrival of a declared 9,000 Russian Federation troops on Belarusian territory to form joint Russia-Belarus formations.  This latest move furthers the regime’s existing efforts to aid and abet Russia’s abuses in Ukraine, including through permitting Russia’s use of Belarusian territory and airspace to launch missile and drone attacks against Ukraine and by providing direct support to Russia’s military.   We call again on the Lukashenka regime to cease its complicit behavior in supporting Putin’s unprovoked war against Ukraine.

Mr. Chair, the United States will continue to stand with those demanding justice and accountability.  I can think of no better way to mark Ukraine Defenders’ Day last week than by highlighting Ukraine’s military success in retaking over 1,200 square miles of its sovereign territory from Russia’s clutches.  Ukraine’s defenders have time and time again inspired the world with their bravery and commitment.  To support Ukraine with the resources needed to build on these successes, the United States is providing an additional 725 million dollars in military assistance to Ukraine, bringing the total since February to 17.6 billion dollars.  This includes additional arms, munitions for its HIMARS and howitzer launchers, and other equipment for Ukraine’s armed forces as they continue to push out Putin’s invaders.  As President Biden has said, the United States pledges “to continue supporting Ukraine as it defends itself from Russian aggression for as long as it takes.”  We will continue to stand with the people of Ukraine as they defend their freedom and independence with extraordinary courage and boundless determination.