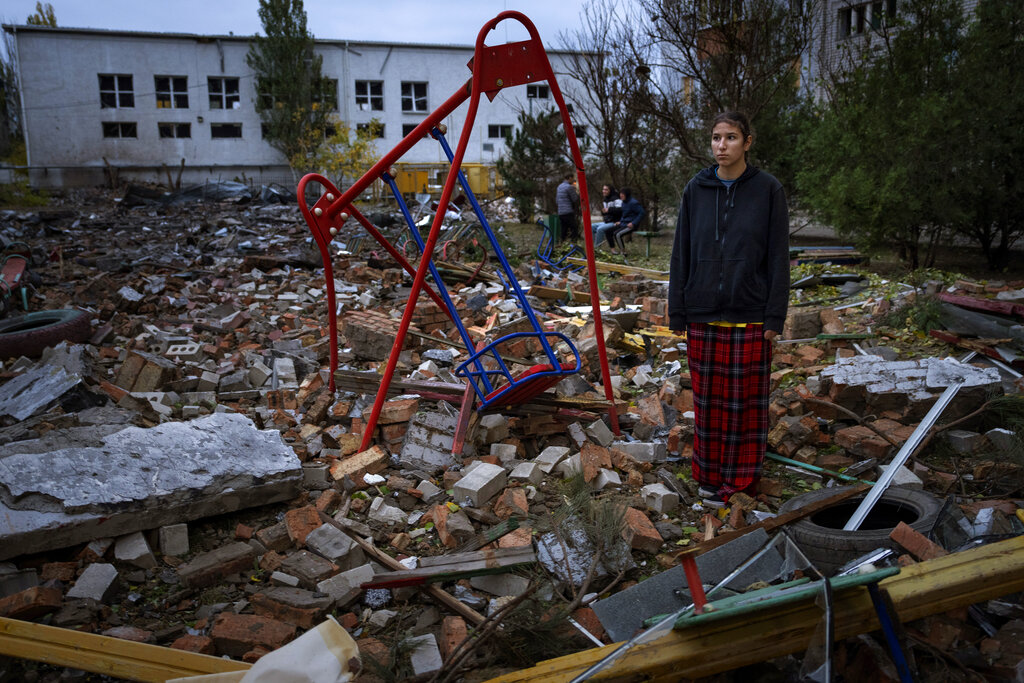 Taisiia Kovaliova, 15, stands amongst the rubble of a playground in front of her house hit by a Russian missile in Mykolaiv, (AP Photo/Emilio Morenatti)

As the Russian Federation’s neo-imperialistic war of aggression continues, Ukraine’s valiant self-defense has come to symbolize more than just safeguarding its homeland.  Colleagues, I ask you, do we want a world where might makes right and your bigger, supposedly stronger neighbor can unilaterally violate your sovereignty, seize your territory, and threaten nuclear use if you resist successfully?  Or do we want a world that continues to be grounded in the principles of the UN Charter, a world where all member states are sovereign equals?  Sadly, these are not rhetorical questions, but Russia’s failing war and Ukraine’s bravery are strong examples of the power and importance of the principles that undergird the international rules-based order, of which the OSCE is an integral part.

Russia’s lack of success in using military force to impose its will on Ukraine is leading Putin to take increasingly desperate actions.  We saw this last week when the Kremlin imposed martial law in parts of Ukraine and in regions of Russia bordering Ukraine, claiming this move gives it the power to seize property, forcibly resettle residents, establish checkpoints, and detain people for up to 30 days.  By Russian authorities’ own admission, their forces are attacking critical infrastructure in advance of winter.  Civilian deaths are climbing, indicating these events are either deliberate or that the precision of Russia’s military is not as good as previously believed.  We have already seen evidence of extensive violence and torture in areas under the control of Russia’s forces, such as in Bucha and Izyum.  These do not appear to be random or isolated incidents but rather a pervasive pattern of abuse.

Lastly, Putin’s ongoing loose talk about using nuclear weapons is the height of irresponsibility.  Just this week, Russia falsely alleged that Ukraine is preparing to use a dirty bomb on its own territory as part of some sort of “false flag” scenario.  This is par for the course for Russia – they often attempt to blame others for things they themselves may be planning to do.  In fact, Foreign Minister Kuleba of Ukraine has invited the International Atomic Energy Agency to send experts to peaceful facilities in Ukraine to debunk Russia’s claims.  We reject Russia’s transparently false allegations and are confident the world will see through any attempt by the Kremlin to use this allegation as a pretext for escalation.  We have been very clear directly and privately with Putin and with Russia about the consequences that would follow any use of nuclear weapons.

Compare Russia’s depravity with the grit, resilience, and heroism Ukraine and its citizens have demonstrated.  Kremlin forces are attacking energy infrastructure hoping to undermine the ability of Ukraine’s civilian population to endure cold winter temperatures.  Since October 10, Putin’s forces have carried out nearly 300 missile, artillery, and drone strikes on Ukraine’s energy infrastructure.  Because of this, depending on the day and the pace of Russian attacks, a large share of Ukraine’s power infrastructure is damaged – either destroyed or down for repairs – or cut off from the larger grid, leading to significant power outages.  However, we have seen Ukraine’s citizens respond with amazing resilience and speed, fixing roads and collectively minimizing their energy use to make it through the war together.  We commend these successful efforts to maintain electricity and heating while also rebuilding amid ongoing attacks.  Ukraine’s citizens are showing us in real time how you win a war.

And just as the Kremlin’s recent strikes cannot and will not break Ukraine’s spirit, they also will not bend our resolve to support Ukraine.  Our nation’s commitment to Ukraine’s sovereignty and territorial integrity remains steadfast and resolute.  Since February, the United States has provided over 1.5 billion dollars in assistance to cover humanitarian needs by providing food and cash assistance, safe drinking water and hygiene support, health care, support to women, children, and others affected by sexual violence or other trauma, and other vital relief.  Our assistance also includes a 55 million dollar U.S. investment in Ukraine’s heating infrastructure that will help support the repair of pipes and heating equipment across the country.

Given the relentlessness and brutality of Russia’s aggression, especially as winter approaches, the UN estimates 4.3 billion dollars is needed for humanitarian assistance through the end of the year, with 2.9 billion received to date.  The United States will continue to deliver assistance to Ukraine and will work with partners to meet this need for as long as it takes.  We have said it before and I will say it again: Russia cannot erase a sovereign state from the map, change borders by force, or seize another country’s territory.

Mr. Chair, we often have to speak in statistics and numbers to quantify the sheer scale of human tragedy caused by Putin’s war.  However, we must never forget that attached to each of these numbers is a very real story of unimaginable human suffering.  Each number is someone’s parent, sibling, or child.  A relative.  A best friend.  No one has been spared the horrific impacts of this war.  At the same time, there is one man behind the aggression:  Vladimir Putin.  One person can stop this war now and withdraw Russia’s forces: Vladimir Putin.  He alone chose to start this war, he alone chooses to continue it, and he alone can end it.  As the death and destruction in Ukraine mount, Putin also callously disregards the growing costs for people around the globe who have been affected by increased prices and food shortages.  As Secretary Blinken has said, if Russia stops fighting and withdraws from all of Ukraine, the war ends.  If Ukraine stops fighting, Ukraine ends.  Putin can and must stop this cruel war of choice immediately.