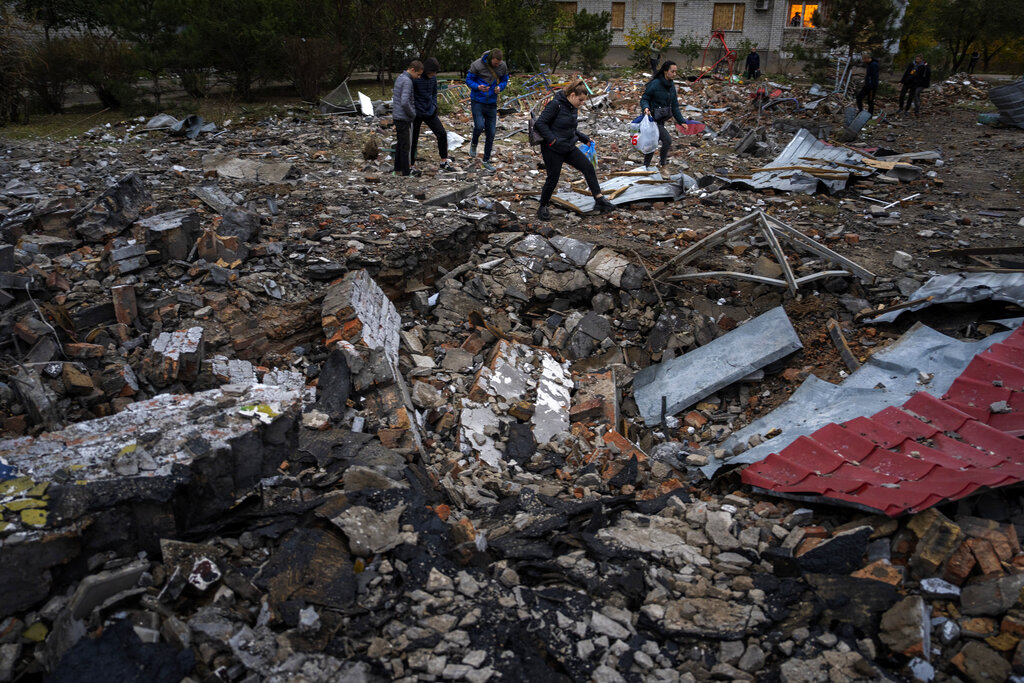 As delivered by Ambassador Michael Carpenter
to the Permanent Council, Vienna
November 3, 2022

This week, we enter the tenth month of Putin’s war against Ukraine.  Over these last few months, Ukraine’s defenders have pushed back Russian forces, liberating sizeable territories from the Kremlin’s tyrannical rule.  In response, Russia has ramped up its attacks on Ukrainian civilians.  It has resorted to missile and drone attacks against critical infrastructure to inflict maximal pain and cruelty on Ukraine’s civilian population.  On Monday, again timed perfectly with the morning rush hour, Russia’s forces reportedly used over 50 missiles to strike 18 facilities in 10 of Ukraine’s regions, mainly hitting electrical stations, substations, and other critical infrastructure facilities.  These included the Kaniv Hydroelectric Power Plant, Kharkiv Combined Heat-and-Power Plant, and the Prydniprovska Thermal Power Plant.  In Kyiv, these attacks cut off power to 350,000 apartments and left 80 percent of the population without water, forcing people to wait in long lines to draw water from old stone wells.  Cowardly attacks like these, designed to cripple Ukraine’s infrastructure, have intensified and continued for weeks as Russia has lost ground on the battlefield.  Again, let us recall that deliberate attacks on civilian infrastructure are war crimes.

At the same time, the Kremlin is attempting to increase international energy prices to cause pain to the participating States seated around this table.  While Russia is blaming everyone but itself for these price increases, it is worth noting that the Kremlin has deliberately chosen to flare its gas production into the atmosphere rather than deliver energy on a stable, predictable schedule to its customers in Europe.  Mr. Putin likely calculates this will create political headwinds for European leaders who have imposed costs on Russia.  Meanwhile, Russia’s efforts to destroy Ukraine’s critical infrastructure are designed to create a humanitarian catastrophe in a cold-blooded, inhuman bid to freeze Ukraine into submission this winter.

We are also seeing the Kremlin take actions that yet again inflict suffering on the world’s most vulnerable as part of its effort to coerce the international community into acquiescing to its landgrab.  Once again, Putin is weaponizing food by playing games with Russia’s participation in the UN and Turkish-brokered Black Sea Grain Initiative.  After announcing it would withdraw from the Initiative just five days ago, Russia now says it will return to implementation but has not yet committed to renewing its participation after the 19th of November.  Such brinksmanship with international food shipments is unconscionable when tens of millions across Africa are facing food insecurity, and has already led to a spike in grain futures.  The Black Sea Grain Initiative has already moved nearly 10 million metric tons of grain through nearly 400 ships, with two-thirds of its wheat exports going to the Global South.  Since the Initiative began, the UN’s Food Price Index had fallen by almost 15 percent after dramatically spiking right after Putin launched his war.  The Initiative is working, which is why dozens of ships are waiting right now for inspection to load grain.  Any Kremlin effort to disrupt these critical grain exports shows that it simply doesn’t care if people and families around the world go hungry.  However, it is not surprising that Russia is again acting callously to undermine this Initiative.  Let’s remember, the Kremlin previously demonstrated its duplicity by attacking Ukraine’s main port city of Odesa just one day after signing the grain deal.

In addition to the Kremlin’s actions which are already affecting global food security, the rhetoric coming from Mr. Putin and other officials recently over the possible use of nuclear weapons in Ukraine deserves global condemnation.  Foreign Minister Kuleba’s invitation to the International Atomic Energy Agency to send experts to Ukraine to debunk Russia’s claims regarding a potential dirty bomb clearly demonstrates Ukraine’s continued commitment to international transparency.  We are confident the world will see through any attempt by the Kremlin to use this false threat as a pretext for further escalation.  The United States has communicated to the Kremlin directly and very clearly the consequences that would follow from any use of a nuclear or radiological device in this war.

We also strongly condemn the Russian Federation’s ongoing actions at Ukraine’s Zaporizhzhya Nuclear Power Plant and the unconscionable pressure it has exerted on the facility’s personnel, which threatens the safety of the plant.  This includes actively working to pressure the nearly 6,700 staff members who bravely continue to work at the ZNPP into signing sham contracts with a Kremlin shell company.  This is a further irresponsible escalation, and we will hold the Kremlin responsible for any incident resulting from its actions.  We also strongly support the IAEA’s efforts to bolster safety and security in and around the plant.

What is the common denominator in all these brutal tactics?  Well, it’s quite simple, really: Russia is threatening to hurt people to achieve its geopolitical aims, whether it be Ukrainian civilians, hungry families in Africa and Asia, or European consumers of its gas.  But Russia’s desperate attempts to take its frustrations out on civilians will not achieve its desired aims.  While Russia has been manufacturing international crises and stoking fear of nuclear weapons usage, Ukraine has continued to heroically liberate its sovereign territory.  In just two weeks in October, Ukraine’s armed forces have successfully regained control over 12 thousand square miles, and they continue to advance.  Ukraine’s armed forces have built on these victories, making real gains in areas like Kherson where Russia never thought it would have to defend its positions.  By liberating its land, Ukraine is also rolling back and further exposing the Kremlin’s filtration network, evidence of torture and mistreatment, and mass graves like those discovered in Bucha and Lyman.  By supporting the restoration of Ukraine’s territorial integrity, the international community will send a clear message that the Kremlin’s ideology of hate, militarism, and expansionism has no place in the modern, civilized world.

This is why the United States announced on October 28 yet one more tranche of military assistance to Ukraine, the 24th assistance package since September 2021.  This latest assistance will provide Ukraine with additional HIMARS ammunition, more artillery ammunition, and satellite communications equipment.  This raises total U.S. military assistance for Ukraine to approximately 17.9 billion dollars since the Kremlin launched its premeditated, unprovoked, and brutal full-scale invasion on February 24.  Through these efforts, the United States stands in solidarity with more than 50 countries supporting Ukraine’s defense, including many who sit around this table.  Colleagues, we cannot relent.  Not for a second.  We cannot allow Russia’s forces to get away with torture, sexual-based violence, and forced deportations.  The sooner Ukrainian forces liberate their land, the sooner these bestial practices will end.  The United States’ commitment to Ukraine has been and will remain ironclad and we will put an end to this madness.