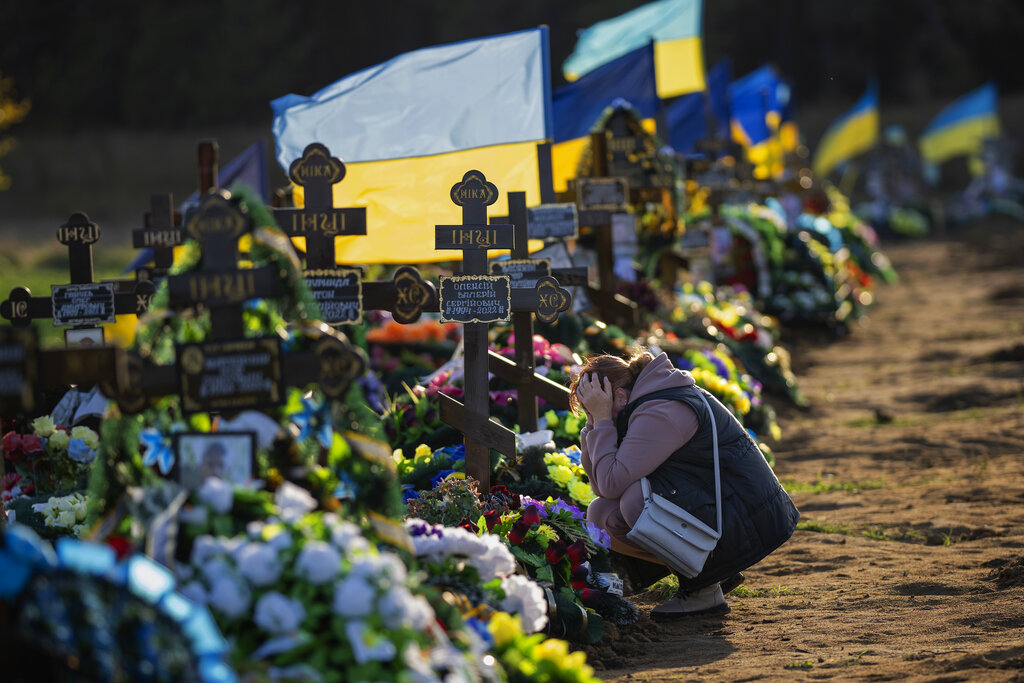 Tamara, mourns at the grave of her only son, a killed during a Russian bombing raid, at a cemetery in Mykolaiv, Ukraine. (AP Photo/Emilio Morenatti)

For weeks, we have seen the Russian Federation striking the infrastructure that provides Ukraine’s people – including women, children, and the elderly — with the most basic of human needs.  This is a clear pattern Russia has followed in battlefields across the world, including Syria, cynically taking out fundamental systems such as heat, water, and electricity in an apparent attempt to demoralize and beat civilian populations into submission.  We saw this in the Russian Federation’s November 4 shelling in residential areas of Zaporizhzhya Oblast, which damaged a gas pipeline.  That same night, Kremlin forces also shelled the Nikopol district, damaging 14 residential high-rise buildings and other civilian infrastructure.  Unrelenting attacks have also reportedly almost completely destroyed the plants that provide the power to the city of Bakhmut.

As of today, Russia has destroyed some 40 percent of Ukraine’s energy infrastructure, including thermal energy plants that provide homes, schools, and hospitals with heat in wintertime, when temperatures can drop to 20 degrees below zero Celsius.  Putin seems to have decided that if he can’t seize Ukraine by force, he will try to freeze it into submission.  We condemn this escalation, including these attacks against infrastructure.  Attacks targeting civilians and civilian objects constitute war crimes, and we reiterate our determination to ensure full accountability in Ukraine.

In addition, Putin and other senior officials continue nuclear weapons fearmongering.  When Putin falsely claimed Ukraine was making a so-called dirty bomb at three sites in the country, Ukraine wisely and transparently requested the IAEA visit.  Last week at our Permanent Council meeting, we heard the Russian Federation repeat this lie.  That same day here in Vienna, IAEA experts publicly commented that, “Based on the evaluation of the results available to date and the information provided by Ukraine, the Agency did not find any indications of undeclared nuclear activities and materials at the locations.”  The Russian Federation must stop its  proliferation of disinformation.

In the face of the Kremlin’s ongoing lies and brutality, the United States has continued to work with allies and partners to responsibly provide humanitarian and military assistance to Ukraine.  In contrast, Russia has irresponsibly sought and obtained assistance from countries under UN sanctions, namely North Korea and Iran.  In light of the well-known, illegal transfer of Iranian drones to Russia, the United States joined others in requesting the UN Secretary General  conduct an investigation into Russia’s non-compliance with UN Security Council Resolution 2231.  Meanwhile, we continue to vigorously enforce and adapt U.S. sanctions, making it harder for Iran to sell weapons to Russia.

At the same time, the United States remains vigilant to the possibility that criminal and non-state actors may attempt to illicitly acquire weapons from sources in Ukraine, including members of the Russian military.  We assess that capture of Ukraine’s weapons – including donated material – by Russia’s forces poses the greatest risk of diversion that could result in onward trafficking.  As a result, the United States is implementing a comprehensive plan to counter the illicit diversion of advanced conventional weapons.  This plan further safeguards and accounts for arms and munitions in Ukraine and neighboring countries when they are transferred, stored, and deployed.  It also strengthens regional border management and security by building the capacity of security forces, law enforcement, and border control agencies to deter, detect, and interdict illicit arms trafficking.  Until Russia reduces the risk of illicit proliferation by ending the war it started and withdrawing its forces from all of Ukraine’s sovereign territory, we will work to address this issue.

Mr. Chair, last year Secretary Blinken sent a clear message that if Putin further invaded Ukraine, the United States and its partners would impose massive consequences and severe costs on the Russian Federation.  Putin bet we would not follow through.  He was wrong.  Since Russia’s full-scale invasion in February, we have worked with a coalition of allies and partners to sanction those supporting the Kremlin’s war machine and we have provided substantial security assistance to Ukraine’s forces as they defend their people, their country, and their democracy.  Last Friday, National Security Advisor Jake Sullivan traveled to Kyiv where he reaffirmed U.S. support for Ukraine would remain “unwavering and unflinching.”  That same day, the United States announced an additional $400 million security assistance package for Ukraine, which includes the refurbishment of 45 T-72 tanks, unmanned aerial vehicles, and refurbished HAWK surface-to-air missiles for eventual transfer to Ukraine.  This assistance will support Ukraine as it continues to advance on the battlefield and in its efforts to protect against the Russian Federation’s ongoing attacks targeting Ukraine’s civilian infrastructure as winter fast approaches.