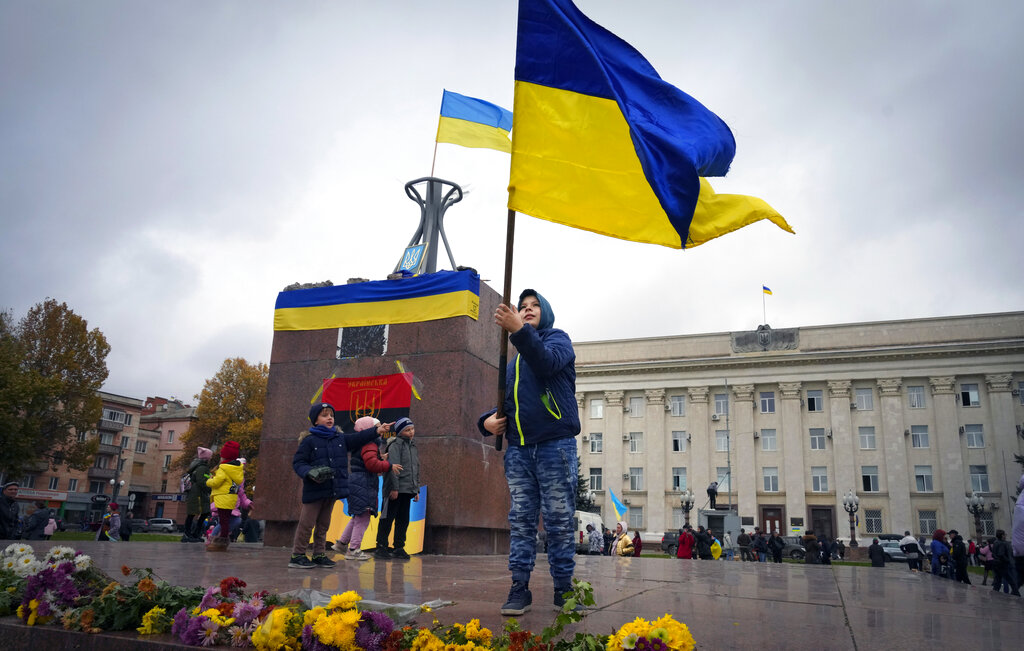 to the Permanent Council, Vienna
November 17, 2022

First of all, our hearts go out to the people of Poland and the loved ones of those who lost their lives in the explosion near Przewodów.  We have full confidence in the Polish government’s investigation of the explosion, and we commend them for the professional and deliberate manner in which they are conducting it.  We will not get ahead of their work and remain in close touch with our Polish counterparts, as we are still gathering information.  We have seen nothing that contradicts President Duda’s preliminary assessment that this explosion was most likely the result of a Ukrainian air defense missile that unfortunately landed in Poland.

That said, whatever the final conclusions may be, it is clear that the party ultimately responsible for this tragic incident is Russia, which launched a barrage of missiles on Ukraine specifically intended to target civilian infrastructure.  Ukraine had — and has — every right to defend itself.

As President Biden said this week in Bali, Ukraine has our full support and we will continue to do whatever it takes to give Ukraine the capacity to defend itself.  There is only one aggressor in this war, and it is the Russian Federation.  Together, we will stop its aggression and hold its leadership accountable for the atrocities that have been committed against the people of Ukraine.

Mr. Chair, last Friday, the world stood in awe as Ukraine’s armed forces made history, liberating Kherson from 254 days of the Russian Federation’s brutal control.  The photos and videos of Ukraine’s citizens jubilantly celebrating their liberation are deeply moving and harken back to the scenes of liberation in Europe after the Second World War.  Hundreds of Kherson residents gathered in the central square, waving Ukraine’s flag, singing their national anthem, shouting “We waited for you! We love you!”

However, as Russia’s troops flee in defeat, the human cost of their monstrous conduct is becoming more and more evident.  Reports continue to come in of the bodies of civilians and soldiers being unearthed from makeshift graves and of the discovery of torture chambers scattered throughout the areas Russia previously controlled.  Ukraine’s newly liberated citizens are now able to tell their stories about being detained, interrogated, and tortured by members of Russia’s forces.  In many cases, loved ones are still missing.  Tetiana Fomina vividly described her experience living through Russia’s military control.  “Life under occupation was horrible.  We were never free.  The Russians had guns on them, and you never knew when they would come to get you.”  Tatiana had cancer, but was denied treatment at a hospital for eight months. Why?Because a Russian Federation passport was required to receive it.

Olena Naumova, a kindergarten teacher, could not stand idly by as the Kremlin’s forces occupied her city, brutalizing those around her.  Naumova exercised her fundamental freedom to speak out against the abduction, filtration, and torture of her fellow Ukrainian citizens.  The response from Russia’s soldiers was to abduct her, putting a dark plastic bag over her head as they dragged her to a car, warning her and I quote “Don’t lie. We will shock you with electricity. We will break your bones. We will put construction foam in your body.”  The 57-year-old kindergarten teacher was repeatedly beaten over four days and held in captivity for an additional week.  The Russian Federation soldiers who kidnapped and tortured her only released her after forcing her to promise to give them thousands of dollars.  Naumova’s reaction to Ukraine’s liberation of Kherson was understandably one of relief, to put it mildly.  In her words, “I can finally breathe.  It’s like waking up from a coma.”

These experiences sound horrifically familiar.  They echo the stories of Russia’s brutality in Bucha, Izyum, Lyman, and other locations.  Earlier this week, we heard from Ukrainian combat medic Yuliia Paievska – better known to the world as Taira – who vividly described the mistreatment, psychological manipulation, and inhumane living conditions she and others suffered at the hands of their Russian captors.  As the number of these tragic stories continues to mount, so too does our shared determination to hold accountable those who are responsible for these despicable acts.

After hearing the tragic lived experiences from individuals the Russian Federation purportedly claimed as its own citizens, one can clearly see how Russia’s efforts to assimilate the population failed miserably.  Despite Russia’s brutal reign of horror, teachers greeted their students with a quiet “Slava Ukraini,” ignoring the mandated recitation of Russia’s national anthem.  Clerks chose to settle bills using Ukraine’s hryvnia rather than follow dictates to do so in the occupier’s currency.  People in the streets exchanged knowing glances of encouragement, subtly defying the tyrannical rule of Russia’s despotic occupiers.

Nonetheless, the Kremlin’s fleeing forces left the people of Kherson in dire straits.  As they withdrew, they destroyed critical infrastructure, complicating the ability of Ukraine’s citizens to meet basic human needs, such as water, heat, and electricity.  Currently, over 40% of Ukraine’s energy infrastructure has been destroyed by Russia’s bombardments. Over 10 million households have been disconnected from power. In Kherson, bread is now in short supply as there is no power to heat the ovens.  Ukraine’s forces have already removed over 2,000 explosives, including mines, trip wires, and unexploded ordnance from the city.  Despite Russia’s retreat, their capacity for dismemberment, death, and destruction remains.  This is an important reminder of Ukraine’s demining needs and the international support necessary to tackle this immense challenge.  For those around this table who have not yet pledged a contribution to the Support Programme for Ukraine, please consider making a contribution today.  Ukrainians are suffering and dying as a result of this brutal war, and your assistance can make a real difference.

It is a tragic fact that while the Russian Federation destroys and tries to deflect responsibility for its unconscionable actions, Ukraine and its partners work to restore, rebuild, and ensure accountability.  As part of these joint efforts, the UN General Assembly took an important step, pivotal step, I would say, this week by recommending that a register be established to catalogue the extensive damage, loss, and injury caused by Russia’s war against Ukraine.  As the resolution says, Russia “must bear the legal consequences of all of its internationally wrongful acts, including making reparation for the injury, including any damage, caused by such acts.”  We will continue to act in coordination with partners to ensure the Russian Federation is indeed held to account.

Mr. Chair, President Zelenskyy has already clearly shown his commitment to ending this war.  Only Zelenskyy and the democratically elected leadership of Ukraine can decide when and how to engage in negotiations, and the United States will fully support them in their ongoing efforts to restore their sovereignty and territorial integrity within their internationally recognized borders.  Ukraine has already demonstrated it is willing to engage in good faith.  The Russian Federation’s Response this week?  Another round of massive attacks across Ukraine, killing civilians and destroying infrastructure.  Russia’s forces fired around 100 missiles at Ukraine, damaging 15 energy facilities and disconnecting 10 million households from electricity supply.  To be clear, the Kremlin’s answer to Ukraine’s diplomatic overtures was simply more violence.  Now it is up to Russia to demonstrate it is interested in a diplomatic resolution to this war.  Russia was the sole instigator of this war.  Russia is the only reason it is ongoing.  Russia must  end this war today.