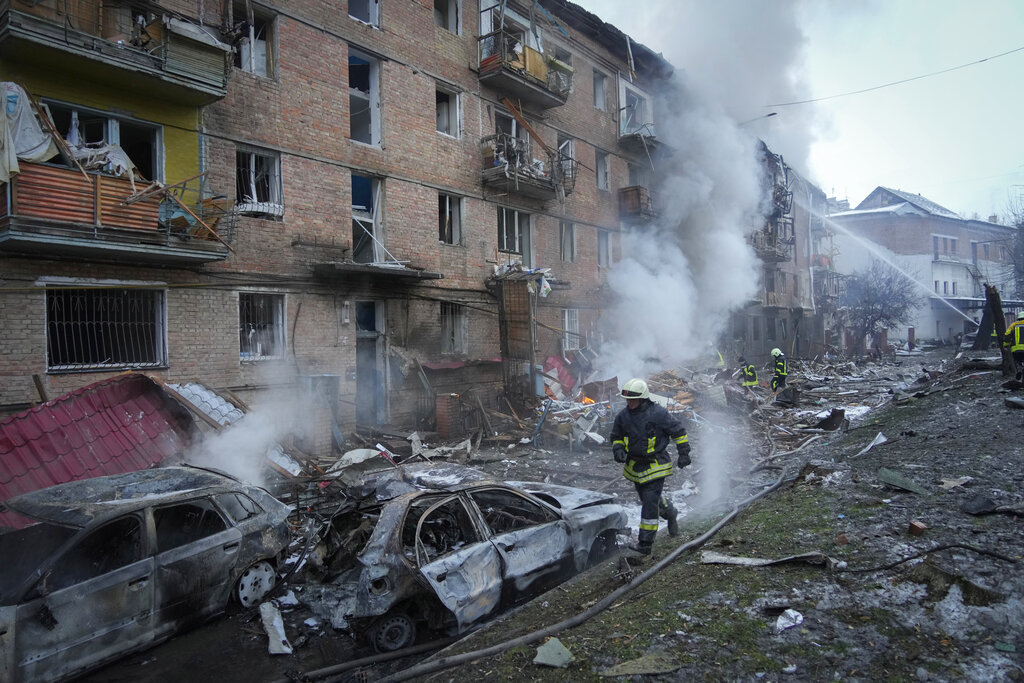 Ukrainian State Emergency Service firefighters work to extinguish a fire at the scene of a Russian shelling in the town of Vyshgorod outside the capital Kyiv, Ukraine (AP Photo/Efrem Lukatsky)

The Russian Federation’s military strategy in Ukraine is becoming increasingly clear.  It is designed to make the winter as intolerable as possible for the people of Ukraine.  Many Ukrainians are referring to this as the Kholodomor strategy: literally, death by freezing.  The Kremlin would like nothing more than to erode Ukrainian forces’ morale and the determination of the Ukrainian people to successfully resist Russia’s invasion.  This week, we saw temperatures in Kyiv and across Ukraine drop well below freezing.  Winter has come and it will be a brutally cold winter indeed as the Russian Federation continues to destroy Ukraine’s energy infrastructure.  As Secretary Austin has recently pointed out, Russia’s military barrages have left Ukrainian civilians without heat, or water, or electricity in many parts.  And these aren’t just mistakes.  They aren’t exceptions to the rules.  These are atrocities.  Moscow’s decision to keep attacking heating stations and essential services will put millions of lives at risk this winter.

Since October 10, Russia has reportedly carried out over 300 strikes on Ukraine’s energy system using missiles, artillery, and drones.  This includes last week’s two large-scale missile barrages over the course of three days, damaging or destroying civilian infrastructure nationwide, which has reportedly disabled half of Ukraine’s energy grid.  The Russian Federation’s targets included at least one of Ukraine’s six thermal power plants, all of which Russia had previously targeted in October.  These renewed attacks forced the plants to operate below 50 percent capacity.  One attack with seven rockets hit near Balakliya, damaging a gas pipeline and starting a fire.  Russia also continued to attack electrical substations and transmission lines.  The large-scale missile barrage Russia’s forces carried out yesterday left most of Ukraine without power and forced Ukrainian authorities to disconnect from the electrical grid and shut down three of its nuclear power plants.  This relentless focus on repeatedly attacking the same energy infrastructure has made it increasingly difficult for Ukraine to complete necessary repairs.  Yesterday’s missile attack on a maternity ward is unconscionable and despicable, resulting in the death of a newborn baby and seven others.

The attacks this week on Ukraine’s Zaporizhzhya Nuclear Power Plant are a sharp reminder of the real dangers posed by Russia’s heinous and irresponsible actions.  Russia’s seizure, militarization, and ongoing abuse, torture, and mistreatment of ZNPP staff are the root causes of the continued threats to nuclear safety and security at the plant.  The heightened risks of a nuclear incident at ZNPP will remain dangerously high as long as Russia insists on using the plant and the area around it for military purposes.  The Russian Federation must heed the IAEA Board of Governors’ call last week to “immediately withdraw its military and other personnel from the Zaporizhzhya Nuclear Power Plant, in order for the competent Ukrainian authorities to regain full control of the plant to ensure its safe and secure operation.”

Because of Russia’s ongoing attacks, the humanitarian situation in Ukraine is increasingly dire, as everyone here knows.  To date, Russia’s war has caused the death of a minimum of 6,595 civilians in Ukraine and injured 10,189 others.  These attacks have also forced nearly 8 million refugees from Ukraine to flee to European countries per the latest estimates from UNHCR.  At the end of October, the International Organization for Migration reported that approximately 6.5 million of Ukraine’s citizens had been internally displaced by Russia’s war.  Of these, 45 percent reported Russia’s missile attacks had caused significant damage to the homes they left, while an additional five percent reported their homes had been completely, utterly destroyed.  Colleagues, these homes are all civilian objects.  Nearly all the families who suffered damages lacked the funds needed to repair their homes.  In October alone, over 450,000 people fled for their lives.  In October alone, one month.  Of these, 280,000 left villages and towns in the east of the country.  The WHO warned this week they expect an additional 2 to 3 million people in Ukraine to leave their homes in search of warmth and safety in the winter months.  These statistics have grown ever more grim as Ukraine’s forces have liberated more territory and begun to learn the true extent of the destruction Russia’s war has caused.  The situation appears particularly dire in Mykolaiv and liberated Kherson, where electricity and heating infrastructure have been decimated.

While Russia’s sustained attacks on Ukraine’s critical infrastructure and housing have only increased the resolve of the people of Ukraine to prevail in this war, these attacks are destroying the Ukrainian state and undermining the civilian population’s ability to survive in cold winter temperatures.  This is particularly true for Ukraine’s citizens living in damaged housing or those forced to flee.  Colleagues, it is safe to say that humanitarian needs will significantly increase over the next few months and the ongoing humanitarian catastrophe caused by Russia’s invasion will only worsen.  That is why the United States has provided over $1.5 billion in humanitarian assistance to Ukraine since February 24.  This includes $55 million for heating infrastructure in Kyiv, as well as $216 million in winterization-specific assistance, bringing our total contribution for winter needs to approximately $271 million.  We are also delivering electrical generators to district heating centers in liberated Kharkiv Oblast in response to the serious humanitarian situation there.

The United States will continue to stand with more than 40 allies and partners, many of you seated around this table, in support of the people of Ukraine as they defend their freedom and independence with extraordinary courage and boundless determination.  The recently announced additional $400 million in artillery ammunition, precision fires, air defense missiles, and tactical vehicles that we are providing will best serve Ukraine on the battlefield.  We are joined in our efforts by France and the UK, including the £50 million in air defense systems offered by UK Prime Minister Sunak during his recent visit to Kyiv, and we also note Sweden’s recent air defense commitment valued at nearly $300 million.  We will also continue to work with our partners around the world to support Ukraine through frameworks such as the recently announced G7 coordination mechanism to help repair, restore, and defend critical energy and water infrastructure.

Mr. Chair, intentionally targeting civilians and civilian objects is a war crime.  Widespread and systematic attacks on a civilian population qualify as crimes against humanity.  All those responsible for ordering and committing such crimes must be held accountable.  In this, the United States will continue to unwaveringly support Ukraine, as I detailed at length in yesterday’s joint FSC-PC on international humanitarian law.

That is also why we also welcome last week’s verdict finding three members of Russia’s proxy forces in eastern Ukraine guilty for their roles in the downing of Malaysia Airlines Flight MH17 in 2014.  The decision by the District Court of The Hague is an important moment in ongoing efforts to deliver justice for the 298 individuals who were murdered on July 17, 2014.  While this is a solid step towards justice, much more work lies ahead to meet the UN Security Council’s demand in Resolution 2166 that “those responsible…be held to account.”  And as for the crimes committed on Ukrainian territory since February 24, the international community must spare no effort to bring every single individual who committed, or ordered to commit, these heinous acts to justice.