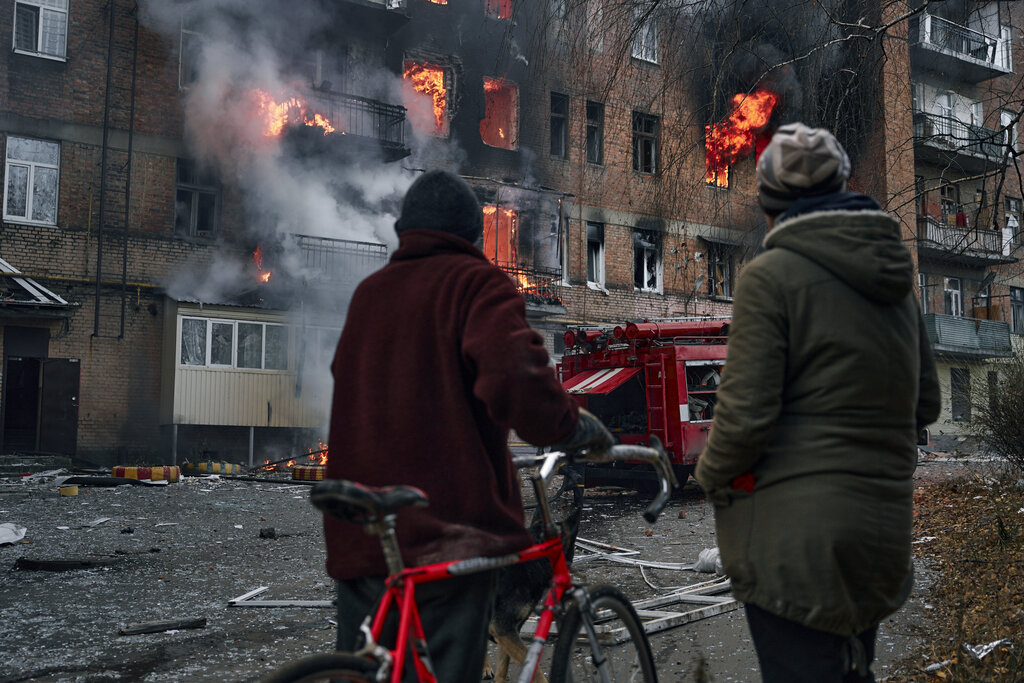 to the Permanent Council, Vienna
December 8, 2022

First off, welcome to the Permanent Council, Foreign Minister Landsbergis.  We appreciate your moral clarity and Lithuania’s staunch commitment to the OSCE’s foundational principles and our shared transatlantic values.

With the holidays approaching, many of us are preparing to gather with loved ones soon.  Yet tragically, for the many thousands of Ukrainian civilians killed in Russia’s war of aggression, that will not be possible.  This includes the over 461 documented cases of children who were killed by Russia’s bombs, bullets, missiles, and mortars.  Their place-settings at family gatherings across the country will be empty this holiday season.  Who could possibly wish that fate on their neighbors?  Russia’s ongoing weaponization of winter also means many of Ukraine’s citizens will continue to struggle for warmth, for food, and for survival in the months to come.

In a country where wintertime temperatures often remain below freezing for weeks at a time, these conditions hit Ukraine’s most vulnerable the hardest – the children, the sick, the elderly, and persons with disabilities.

Since we last met in the Permanent Council, Russia’s recent savage attacks on Ukraine’s civilians have shown that President Putin continues to have no interest in meaningful diplomacy.  I believe most of us around this table want nothing more than a sustainable and just peace.  We want peace, but not a pause that merely gives Russia an opportunity to rest, re-equip, and re-attack Ukraine’s civilians.

Since September, Russia has hit over 200 separate targets in Ukraine’s energy infrastructure.  These attacks have destroyed more than a third of the country’s national energy system, leaving entire cities without electricity.  Over the last week, we saw Russia’s forces continue to attack Kherson and its electrical infrastructure, damaging power grids and leaving the city without power.  Again.

Russia’s generals no doubt think that this brutal missile campaign will make Ukrainians surrender.  This is yet another massive miscalculation by the Russian leadership, building on its earlier failures.  I will do them a favor by informing them of something their intelligence services seem incapable of grasping: Ukrainians will only strengthen their determination to resist this vicious tyranny when they see innocent civilians suffering.  Who wouldn’t fight like hell to resist this evil onslaught?

Just remember a few weeks ago, Kherson’s residents began to re-emerge after Russia’s retreat.  Since then, we have learned more of their harrowing stories of life under Russia’s brutal dictatorship, including allegations of arbitrary detention, torture, and executions of Ukrainian civilians.  Torture chambers have reportedly been found throughout the city, as well as the bodies of at least two dozen Ukrainian servicemen and civilians.  Near one location, Kherson residents described the incessant sounds of torture and witnessed Russia’s forces removing prisoners’ remains.  The experience was so disturbing that nearby residents chose to relocate to escape the cries of the prisoners.  In another location, the bodies of six security guards, each bound and blindfolded, were found alongside the remains of a teenage girl whose body showed signs of strangulation.

Unfortunately, these do not appear to be not isolated incidents.  Just yesterday, the Office of the United Nations High Commissioner for Human Rights (OHCHR) issued its report on the killing of civilians in parts of the Kyiv, Chernihiv, and Sumy regions of Ukraine between February 24 and April 6 while under the Russian Federation’s military control.  OHCHR documented what it concluded were summary executions and attacks on civilians by Russia’s armed forces in 102 towns and villages, resulting in the deaths of 441 civilians, including 28 children, and OHCHR expects the actual number of such lethal attacks to be considerably higher.  The report concluded there are strong indications that the summary executions documented may constitute willful killing, which is a war crime under the Geneva Conventions.

We know Putin’s playbook: freeze and starve Ukraine’s civilians; force them from their homes; drive up energy, food, and other household costs, not only across Europe but around the world; and then try to splinter our coalition.  But the Kremlin will not succeed.  We will not let ourselves be splintered.  And we have not.  At last week’s Ministerial Council meeting in Lodz, it could not have been more blatantly clear just how isolated Russia and Belarus are at the OSCE.  After spending most of this year lying to this body to try to justify Russia’s bloody war and Belarus’s complicity in it, they have utterly discredited themselves.  The Russian ambassador noted last Friday that other states were welcome to join the statement he delivered on behalf of Russia and Belarus.  But did they?  I think we know the answer: no one did. Because no one chooses to be associated with Russia’s appalling violence against civilians.

Mr. Chair, the United States will continue to work with our Allies and partners to support Ukraine.  As part of this effort, the United States announced it is providing $53 million dollars in aid to help Kyiv procure the equipment it needs to sustain its critical infrastructure this winter.  These funds will be used to purchase transformers, circuit breakers, and other items, and we will prioritize equipment that can be shipped immediately.  This new assistance is in addition to the $55 million dollars committed to provide Ukraine with generators and other energy assistance.  Furthermore, as part of a recent Ukraine Security Assistance Initiative Package, the United States has signed contracts to deliver eight air defense missile systems to Ukraine, along with other training and logistical support.  The first two NASAMS have already been delivered, and we are proud to see their excellent success rate against Russia’s missiles.  We will continue to prioritize air defense.  And we will prove to Russia that its efforts to use winter as a weapon to demoralize and defeat Ukraine will not succeed, and that our commitment to Ukraine will not waver.