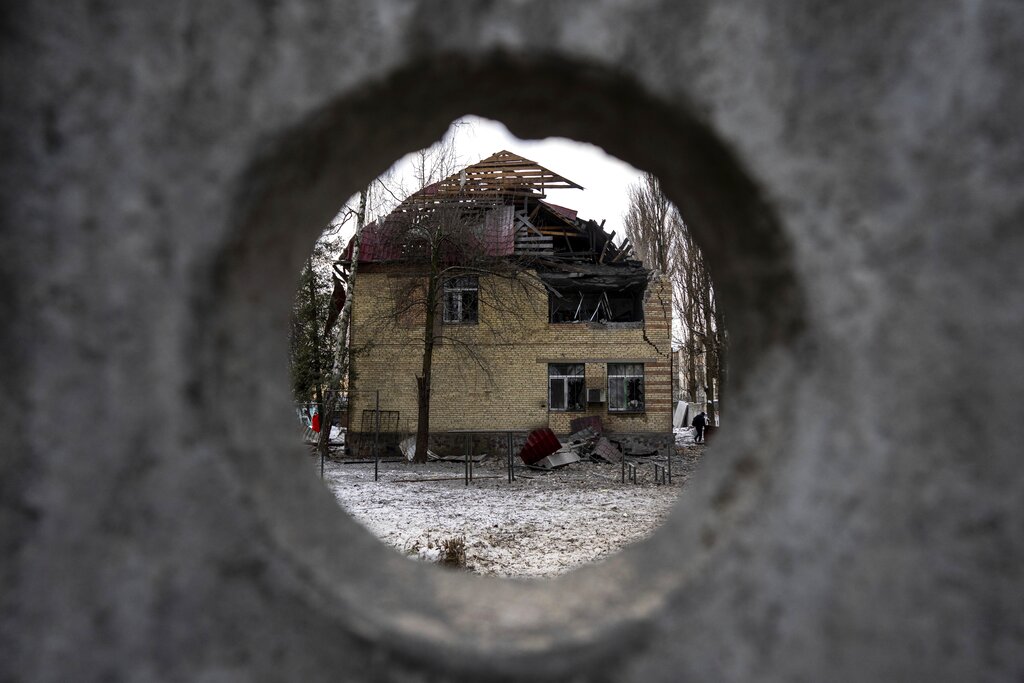 A building that has been heavily damaged by Russian shelling, is seen through the fence, in Kyiv, Ukraine, Wednesday, Dec. 14, 2022. (AP Photo/Evgeniy Maloletka)

On this final meeting of the Permanent Council this year, I would like to convey my deepest gratitude to Poland for its strong and principled leadership as Chair-in-Office.  Ambassador Hałaciński, dear Adam, you and your team have expertly navigated what will surely go down as a historic year for this organization.  It has been a horrible year, a brutal year, one full of suffering and tragedy and lost hope.  Yet you have acted resolutely to protect our shared principles, and refused to succumb to threats, blackmail, or the morally vacuous temptation to act as a “neutral arbiter” between good and evil.  Instead, you have spoken the truth, defended the principles of this organization, and tried to ensure we deliver for those of our citizens who need assistance: the refugees fleeing Ukraine, the children affected by the war, and the victims of Russia’s filtration camps.  All of us owe you a deep debt of gratitude.  Thank you for your leadership.  I am proud of what we have accomplished together.

As we gather today for our last scheduled Permanent Council meeting of 2022, it is important to reflect on what an unprecedented year this has been.  As we say here every week, Russia’s war of aggression against Ukraine is a direct and deliberate assault on the values and principles of this Organization, and indeed it has been an assault on the OSCE itself.  From the commitment not to threaten or use force against another participating State to the simple fact that Russia currently holds three staff members of this very organization – indeed, our colleagues – in detention, no principle has been left unchallenged.  All of these actions are a direct assault on the organization and a repudiation of everything it stands for.

Meanwhile, Russia’s pollution of the Permanent Council with disinformation and lies has exacerbated the challenge we collectively face by turning every fact 180 degrees on its head.  In this way, Russia tries to convince the world that right is wrong and that wrong is right.  That Ukraine is bombing and torturing its own people.  That Ukraine is destroying its own infrastructure.  That Russia is a victim.  We cannot become accomplices to these lies.  We must not.

Peace and security must be built on truth, trust, and credibility.  The reliability and integrity of what we say here matters.  It is not worth the effort, or the time, to catalogue all of the false statements made by the Russian delegation in this Council.  But it is important to tell the truth and to set the record straight.  The brave souls remaining in Russia who dare to tell the truth about the Kremlin’s war, such as Vladimir Kara-Murza or Ilya Yashin, suffer brutal reprisals.  Kara-Murza currently sits in prison while Yashin was just meted out an eight-and-a-half year sentence for speaking honestly about the atrocities committed by Russia’s forces in Bucha.  Russia has in fact criminalized the truth.  Here in this Council, we cannot let this stand.

Therefore, I would like to spend just a few minutes recalling three of the Kremlin’s twisted narratives, shamelessly warping reality in order to attempt to justify the unjustifiable – the violence, death, and destruction Russia has unleashed against the people of Ukraine.

The first big lie was told before the war began.  On January 20, we sat in this very room as Russia’s representative claimed his country had no intention of invading Ukraine and that the idea Russia would do so was a “myth.”  Even as late as February 17, Russia’s ambassador continued to insist here in this Council, “the myth about Russia’s alleged ‘imminent invasion’ has been hyped up.”  Those of us warning of Russia’s imminent attack and the humanitarian tragedy it would cause were tragically proven correct only a week later when Russia’s armed forces launched a barbaric onslaught in a failed attempt to take Kyiv.

The second big lie: On both March 11 and March 25 in this Permanent Council, Russia claimed, “the ongoing special operation is aimed at ending the protracted conflict as soon as possible and ensuring that conditions are in place for the peaceful, demilitarized evolution of Ukrainian society and the Ukrainian State.”  This was no limited operation.  It was crystal clear from the very beginning of Russia’s attack on February 24 that this was a neo-colonial land grab; an attempt to subjugate an entire nation-state.  A continuation of Russia’s invasion of Crimea in 2014 and another reflection of the predatory impulse that led to Russia’s aggression against Georgia in 2008.  Just last week, Putin bragged that Russia had acquired new territories and that the Azov Sea had now become an internal sea for Russia.  But we know this was the aim all along, because it was so abundantly clear what sort of propaganda Russia’s people were being fed.

The third big lie: On March 11, Russia’s representative in this room claimed, “I must stress once again that Russian troop units are not threatening the civilians of Ukraine; they are not shelling civilian infrastructure.”  This proved to be one of Russia’s most grotesque lies.  From maternity wards to schools to nuclear power plants, from theaters sheltering children to train stations helping Ukrainian civilians escape Russia’s war, Russia has repeatedly attacked Ukraine’s cities and critical infrastructure to instill fear among the population.  A couple of concrete examples demonstrate the depth of this lie.  Last Saturday, Russia’s attack on Odesa’s power infrastructure using Iranian kamikaze drones left 1.5 million Ukrainian civilians without power and other essential services.  Necessary repairs will reportedly take months to complete.  Humanitarian organizations believe these infrastructure attacks could displace millions of additional people in the coming months.  More broadly, it is estimated Russia has contaminated 160,000 square kilometers of Ukraine with landmines and other unexploded ordnance.  That’s a land mass nearly twice the size of Austria.  These explosive hazards will maim and kill Ukraine’s civilian population for years if not decades to come.  This is Russia’s lasting legacy: death, destruction, and a cold, bloody cynicism.

Mr. Chair, as this year nears its end, we remain unyielding in our collective efforts to deliver peace and justice for Ukraine and its people.  That is why we announced last week another $275 million dollars in additional arms and equipment for Ukraine which includes equipment to further enhance Ukraine’s air defense capabilities.  Over $250 million dollars of our $1.5 billion in humanitarian assistance is supporting winterization efforts, including shelter repairs, heating appliances, thermal blankets, winter clothing, and the distribution of 2,300 generators for collective centers, health facilities, and other critical sites.   To my Russian colleague – make no mistake.  The United States will continue to support Ukraine for as long as it takes, and we will continue to work closely with our Allies and partners to ensure Ukraine can continue to defend itself and liberate its land.  We will not relent.

Russia’s unconscionable war is the only thing that has to stop.  Russia’s continued attacks on Ukraine are a clear demonstration that Putin currently has no interest –  none – in meaningful diplomacy; that short of erasing Ukraine’s independence, he will try to force Ukraine into a frozen conflict, lock in his gains, rest and refit his forces, and then, at some point in the future, reattack.  Until Ukraine is able to fully liberate its land, its citizens will continue to suffer, Ukrainian children will be torn from their families, and civilians will be tortured in filtration camps.  Let us all resolve to put an end to this.