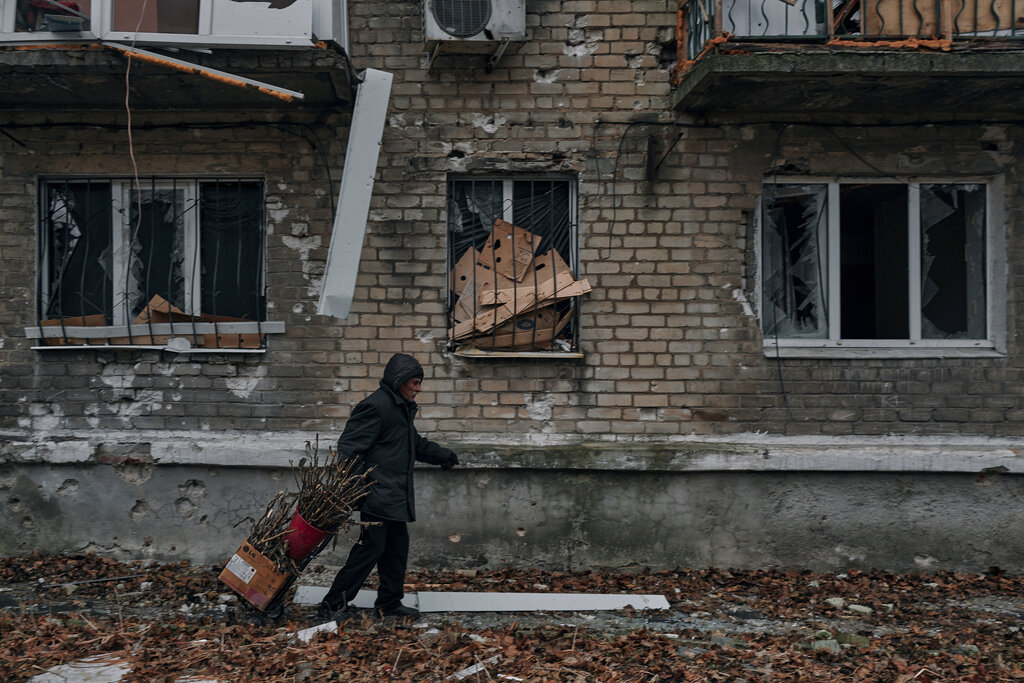 A man carries brushwood for a wood stove to an apartment house basement used as a bomb shelter in Avdiivka, Donetsk region, Ukraine. People have been living in the basement for months hiding from the Russian shelling and rocket attacks. (AP Photo/LIBKOS)

Head of the Dnipropetrovsk Oblast Council Mr. Mykola Lukashuk, I wish you had addressed us under better circumstances, but thank you for taking the time under extraordinary difficult circumstances to address the Permanent Council to describe firsthand the dire circumstances Ukrainians in Dnipropetrovsk must endure.  Even as they face the Russian-occupied Ukrainian territories of Donetsk, Zaporizhzhya, and Kherson to the east and south, the people of your region have hosted or supported the transit of hundreds of thousands of internally displaced persons and continue to suffer themselves from the widespread shelling and effects of Russia’s callous strikes on Ukraine’s critical infrastructure.

Since the Permanent Council last met on December 15, Russia again fired scores of sea- and air-launched cruise missiles and Iranian-provided kamikaze un-crewed aerial vehicles, including in one of its largest barrages since February on December 16.  As is now clear to all, this is an effort by the Russian Federation to weaponize winter, and these salvos again targeted Ukraine’s critical infrastructure and forced millions to suffer further days without heat or electricity.  These strikes, a cowardly counterpoint to Russia’s military losses on the battlefield, once again hit residential areas.  In Dnipropetrovsk Oblast’s Kryvyi Rih, a missile fired by Russia in the attacks struck a home, killing a one-and-a-half-year-old toddler and three others and further injuring four children and nine adults.  Following that strike, shelling by Russia’s forces pounded Dnipropetrovsk Oblast’s Chervonohryhorivka, Marhanets, and Nikopol, across the Dnieper from the Zaporizhzhya Nuclear Power Plant.

Alarming reports by Ukraine’s nuclear power utility concerning Russia’s militarization of the Zaporizhzhya Nuclear Power Plant, as well reports of potential physical damage and abuse of the plant’s personnel, continue to underline Russia’s unprecedented and reckless behavior.  Russia’s military activity near and control of the Zaporizhzhya Nuclear Power Plant endanger the whole of Dnipropetrovsk Oblast – and beyond.

As Russia’s brutal, full-scale invasion of Ukraine enters its eleventh month, the United States remains committed to standing by Ukraine and providing it with assistance.  This was made patently obvious when you look at the reception President Zelenskyy received only yesterday in his visit to Washington, D.C.  Beginning next month, the United States will expand training for the Ukrainian Armed Forces to include combined arms and joint maneuver operations.  This builds upon the training the United States has conducted with the Ukrainian Armed Forces since Russia’s initial aggression in 2014 and is in addition to ongoing specialized equipment training.  Yesterday President Biden announced an additional $1.85 billion in security assistance for Ukraine, bringing our total U.S. military assistance to approximately $21.2 billion since February 24.  This includes a Patriot missile system, to augment the significant air defense capabilities we and our Allies and partners have already provided to counter Russia’s continued missile and drone assaults and defend against Russia’s cold, calculated targeting of critical infrastructure.

Mr. Chair, beyond the battlefield, the United States, along with its Allies and partners, continues to ensure the Russian Federation and its enablers incur rising costs for Putin’s war of choice.  In December, the United States and its Allies and partners have announced additional sanctions and export controls against Russia.  In particular, the United States has further targeted one of Russia’s wealthiest men, as well as Russia’s financial sector, senior government officials connected to Russia’s ruthless mobilization efforts, and its proxy authorities installed on Ukrainian territory.

These continued actions ensure Russia faces consequences for its war of aggression and complement our security and humanitarian support to Ukraine, and will continue as long as Russia elects not to end its barbaric war.

Mr. Chair, within Russia, the latest example underscoring the chilling connection between external aggression in Ukraine and internal repression in Russia, which was identified in the Moscow Mechanism Mission’s September report, is the Russian motion to shut down the Moscow Helsinki Group—the first citizens’ group to monitor and promote their government’s observance of Helsinki Final Act commitments.  The ​​politically motivated accusations leveled against the Moscow Helsinki Group are a premeditated stab at the heart of the Helsinki Final Act and its Human Dimension.  The human rights defenders who founded the Moscow Helsinki Group in 1976 and other civil society activists in Russia have faced repression and injustice before, and they have endured.  We must stand steadfastly in solidarity with them in defense of the OSCE and its Human Dimension.  While the Kremlin continues to assault Helsinki principles and tries every way it can to silence brave voices of conscience, it only further isolates Russia and injures its own citizens while waging an unconscionable war against its neighbor.

Mr. Lukashuk, thank you again for providing your first-hand testimony to this special session, and I assure you – the United States stands with Dnipropetrovsk Oblast and with the whole of Ukraine.