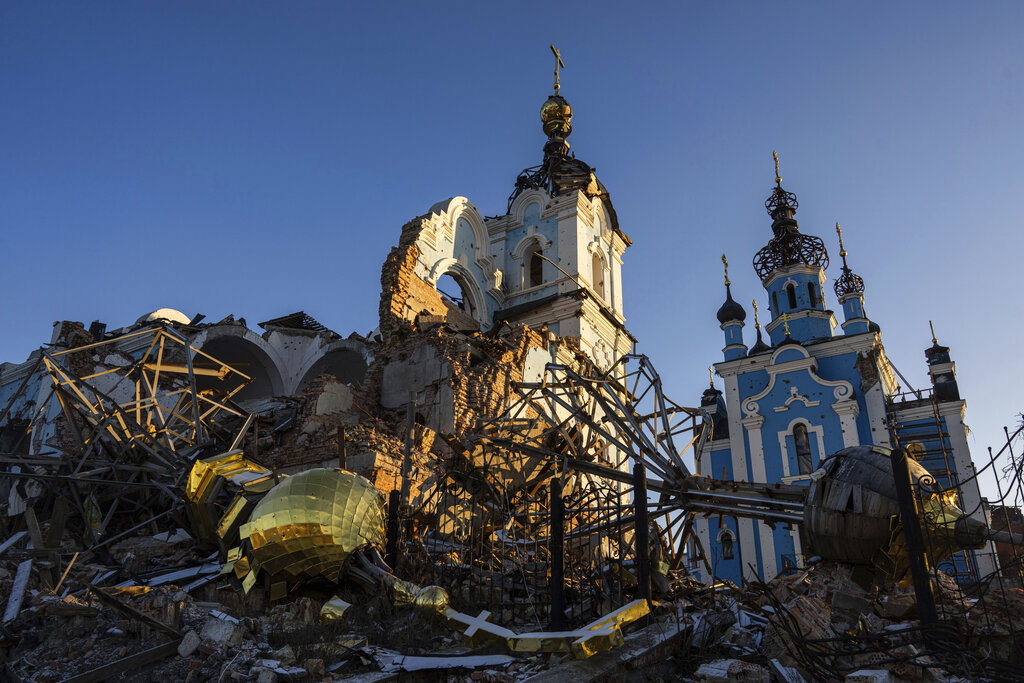 A cupola lies on the ground in front of the Orthodox Church which was destroyed by Russian forces in the recently retaken village of Bogorodychne, Ukraine (AP Photo/Evgeniy Maloletka)

This New Year begins where the old one left off: with death, destruction, and untold human suffering at the hands of Russia’s invading force.  On December 24, Christmas Eve, Russia launched over 40 missiles at Ukraine, killing 16 people in its continuing brazen attacks on critical infrastructure.  In Kherson, for example, Russia’s missiles fell on a busy local market, killing 10 people and injuring at least 58 others.  Russia’s military strikes on the suburbs of Zaporizhzhya destroyed a school and damaged multiple homes and a historic building.

Only a week later, on New Year’s Eve, Russia’s missiles and drones struck Ukraine’s cities and critical infrastructure for three more days in a row.  Over 20 cruise missiles and 45 Iranian suicide drones killed one person and wounded over 20 others, including a Japanese journalist.  These attacks damaged educational and cultural institutions such as the Shevchenko National University and the National Palace of Arts.

In Bakhmut and Soledar, reports continue to surface of droves of convicts recruited from Russia’s prison system barraging the front lines, resulting in grisly scenes of fields literally strewn with body parts and dismembered fragments of uniforms.  These battles in the Donbas are intense and the front lines often change many times throughout the day.  But the one thing that does not change is Ukraine’s resolve to fight for freedom.  Russia may try to weaponize winter, but the people of Ukraine have a far superior armament: the determination to live free, which in the end will prove far stronger than Russia’s undisciplined military.  Russia’s bombardments may bring darkness and cold, but they cannot break the spirit of Ukraine’s people.  We saw this spirit on display as Kherson’s residents lined up outside the city’s blood donation center during the holidays to help their fellow citizens injured by Russia’s barbarism.

In recent weeks, we have seen Russia double down on some of its most despicable behavior in Ukraine.  This includes continuing to forcibly remove children from their families and homes in Ukraine and transfer them to Russia.  Over the New Year, Russia reportedly abducted as many as 2,000 children from Ukraine into Russia under the guise of protecting them from the ongoing violence of Russia’s own war.  We have assessed that Russia’s forces have unlawfully transferred or deported thousands of Ukrainian civilians to Russia from areas that Russia controls as part of its filtration operations in a further grave breach of the Geneva Conventions.  As for the children Russia allows to remain in occupied Donetsk and Luhansk, local puppet authorities are already reportedly compiling lists of children to join the war when they come of age.  Children born in 2005 and 2006 would now already be subject to compulsory military registration.  This advance planning to use Ukraine’s children as cannon fodder for Russia’s war is – I have no other words – it’s just plain evil.  It would also be a violation of the laws of war for Russia to conscript citizens of Ukraine from the areas Russia occupies.

Mr. Chair, Russia’s actions clearly demonstrate it has no serious interest in diplomacy.  None.  We cannot be fooled by the Kremlin’s cynical offers of Potemkin ceasefires.  We cannot be fooled by Russia’s false protestations that the diplomatic ball is in someone else’s court.  Russia remains the sole obstacle to peace in Ukraine.  Russia and Russia alone could end this war today.

For as long as it takes, literally for as long as it takes, the United States will continue to support Ukraine as it defends itself and liberates its territory.  That is why on January 6 President Biden announced over 3.75 billion dollars in additional military assistance for Ukraine.  This includes equipment vital to Ukraine’s defense, such as Bradley infantry fighting vehicles, Mine Resistant Ambush Protected Vehicles, and air defense missiles.  This also includes 225 million dollars in Foreign Military Financing for Ukraine to build up its long-term military capacity.  That brings our total contribution to Ukraine’s defense since February 24th of last year to almost 25 billion dollars.  But we are ready to do a lot more.  We will continue to stand in solidarity with the more than 50 countries supporting Ukraine’s defense.  And we are happy to see so many of our Allies and partners doing whatever they can to support Ukraine.  Because we all know that Ukraine is fighting for the free world: not just for the freedom of its own people but for the principles of a free and peaceful global order as enshrined in our own Helsinki Final Act.  May these principles always triumph over aggression,  inhumanity, and lawlessness.