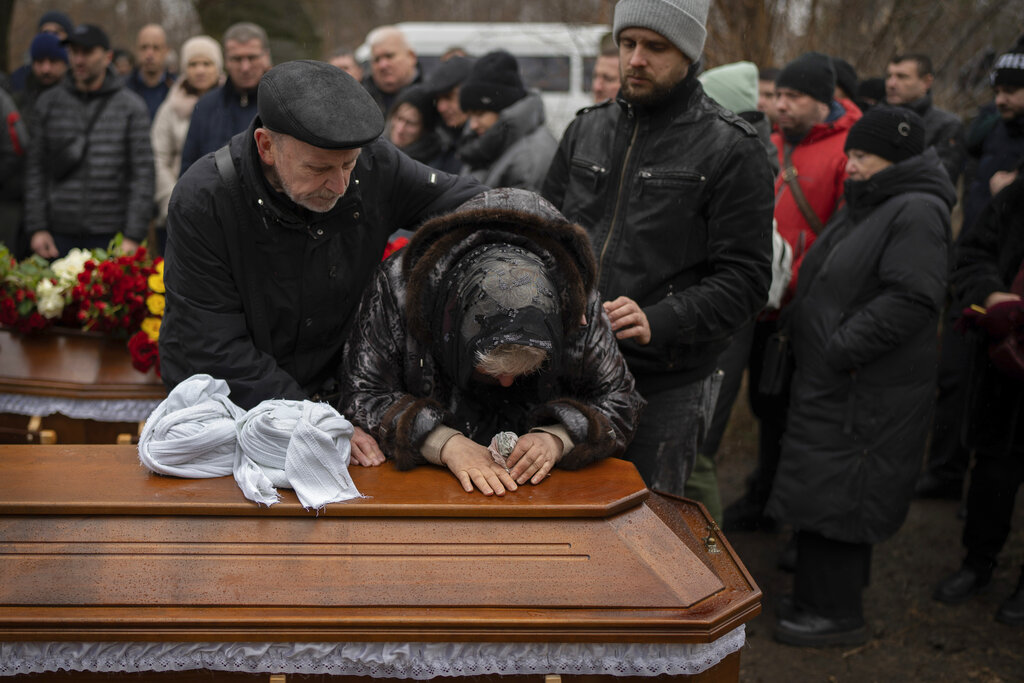 A relative of the couple, Maksym and Nataliia Shvets, who died under the rubble after Russia hit their apartment block with a missile, cries on one of the coffins during a funeral service in Dnipro, Ukraine, Wednesday, Jan. 18, 2023. The death toll from the weekend Russian missile strike on an apart

I would like to again offer my condolences for the tragic loss of life at the helicopter accident near Brovary.  The victims and the families are in our thoughts and prayers.

Since we met last week, the Kremlin has continued to inflict on Ukraine the kind of unconscionable violence and destruction that has become its trademark.  This includes launching missile attacks against multiple targets across Ukraine on January 14, including the city of Dnipro.  As a result of these attacks, 38 missiles fell on six of Ukraine’s oblasts, damaging energy infrastructure, including two thermal power plants, and causing blackouts across the country.

Reports are making it increasingly clear that Russia’s 52nd Guards Heavy Bomber Aviation Regiment used an older Kh-22 cruise missile in the attack on Dnipro.  These anti-ship cruise missiles were intended for use against naval targets, such as aircraft carriers and carrier battle groups.  The missile also operates with an outdated guidance system.  This is the same type of inaccurate missile that destroyed a shopping mall in Kremenchuk on June 17, killing 20 people.  Such indiscriminate or disproportionate attacks on civilians or civilian objects are clear violations of international law and war crimes.

As discussed yesterday in the FSC, the attack on Dnipro was particularly horrifying, with one of Russia’s missiles instantly turning a nine-story apartment building into burning rubble.  As a result, 45 people were killed, including six children.  And, as I noted yesterday, the youngest victim was just three years old.  79 additional people were injured, 16 of them children.  More than 70 apartments were destroyed and more than 230 damaged.  Frankly, it is hard to find the proper words to describe these cowardly attacks on civilians.

Twenty-three-year-old Anastasiia Shvets was fortunate to emerge from the rubble in Dnipro alive, saved by Ukraine’s first responders.  Her parents remain missing under what used to be their home.  Tragically, this was just the most recent catastrophe that Russia has unleashed on Anastasiia.  Four months ago, her partner was killed while defending Ukraine.  After the attack, Anastasiia said on social media, “I have no words, I have no emotions, I feel nothing except a great emptiness inside.”  Anastasiia’s reaction is an important reminder for all of us.  Russia’s war is relentlessly causing and compounding personal tragedies, inflicting pain, suffering, misery, and trauma.  So let us please dispense with tired cliches about the need to listen to the other side. Listen to Anastasiia and understand this: there will be more and more victims like her every single day until Russia is finally stopped and pushed out of Ukraine.

Mr. Chair, in addition to striking power plants, apartment buildings, and shopping centers, Russia’s forces have reportedly plundered or damaged over 30 of Ukraine’s museums.  Items stolen include 2,300-year-old Scythian gold, oil paintings from Ukraine’s masters, and items commemorating Ukraine’s fight against the Nazi Third Reich.  Tellingly, looters have also removed computer records documenting these artifacts in an apparent attempt to complicate their future repatriation to Ukraine.  How does looting artifacts from Ukraine’s fight against the Nazis contribute to Russia’s supposed war goal of de-Nazification?  If anything, it mirrors their crimes.   And make no mistake, this looting is not “collateral damage,” it is in fact a central component of Russia’s effort to deny and destroy the symbols of Ukraine’s unique historical national identity and cultural heritage.

Mr. Chair, Moscow’s attacks devastating Ukraine’s cities like Soledar and Bakhmut, and its efforts to reject and repress Ukraine’s distinct culture and history justify your decision to keep Russia’s war at the forefront of our agenda.  We support Foreign Minister Osmani’s efforts to highlight the enormous scale of destruction Russia continues to inflict on Ukraine.  The Chairperson-in-Office also rightly underscored the importance of the Support Program for Ukraine as a vehicle for supporting  Ukraine’s resilience, recovery and reconstruction.  All of us who support the OSCE and its principles should consider making a contribution to the Support Program for Ukraine, if you haven’t already, which will make a real difference in the lives of the people of Ukraine.

Mr. Chair, while incomparable to the tragedy of the lives lost in Ukraine, the United States is also very concerned about recent reports of dozens of OSCE armored vehicles, left by SMM staff in Rostov following the mission’s evacuation, being appropriated by Russia and used in its war of aggression against Ukraine.  This is completely unacceptable.  For those in this Council who stay in their seats to listen to the Russian representative spew his government’s lies, remember also that his government is holding hostage members of this organization and stealing the assets that you, in fact all of us, paid for.

Lastly, Mr. Chair, two years ago leading Russian opposition figure Aleksey Navalny was detained at Moscow’s Sheremetyevo airport upon return to his homeland.  Despite his near-fatal poisoning with a nerve agent by Russia’s security services and his unjust imprisonment since January 2021, Navalny has continued to speak out courageously against the Kremlin’s suppression of freedom in Russia.  As the Moscow Mechanism report issued in September last year concluded: repression at home and aggression abroad are two sides of the same coin.  We reiterate our call for the Russian government to immediately and unconditionally release Aleksey Navalny, as well as my friend Vladimir Kara-Murza and the hundreds of other Russian citizens wrongfully detained, many of them for speaking out against the Russian state’s war against Ukraine.  The Kremlin’s attacks on Navalny and others fighting for their rights are an affront to the fundamental freedoms of all.

Mr. Chair, we must all continue to do what we can to support Ukraine in its defense against Russia’s war of aggression, enabled by Belarus’ complicity.  Russia has made clear it is not interested in credible diplomacy and wants only to continue its brutal war.  For our part, the United States will continue to work with the more than 50 countries who support Ukraine’s sovereignty, territorial integrity, and independence.  Many of them sit here around this table and we are grateful for their solidarity and determination to stay the course.