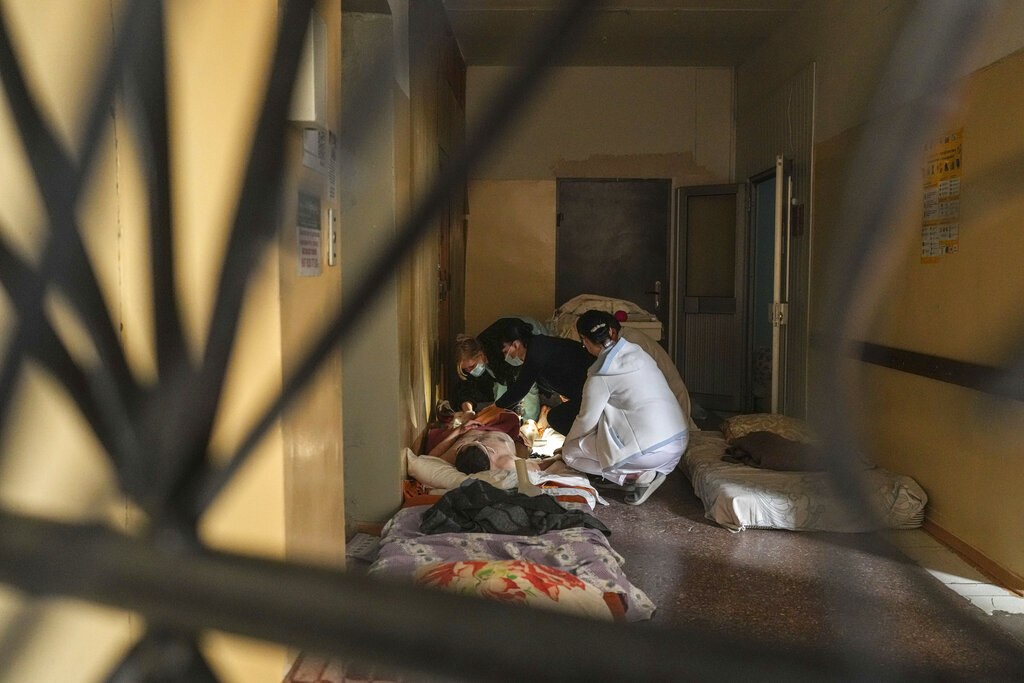 Today is the 29th day of President Putin’s vicious and unprovoked war on Ukraine. We have witnessed one month of suffering. One month of children being orphaned.  One month of savage cruelty inflicted on peaceful citizens.

More than three and a half million refugees have fled Ukraine. More than ten million are internally displaced.  As we speak, countless families huddle in bomb shelters without heat, water, or food.  Mothers comfort hungry toddlers as explosions thunder above ground.

Across the border, the leader addresses a crowd bussed into a stadium. He wears an expensive jacket from the finest of European stores. The symbol “Z” is emblazoned everywhere – the new and infamous symbol of this cruel war. A large banner reads “For a world without Nazism.”

Meanwhile, as my Ukrainian colleague noted, Boris Romantschenko, a 96-year-old Holocaust survivor, who was imprisoned in Nazi concentration camps in Peenemuende, Dora, Buchenwald, and Bergen Belsen, died from Russian shelling at his home in Kharkiv on March 18.

“Evocations of history here are bare nonsense.  Whenever one pulls the trigger in order to rectify history’s mistake, one lies…One always pulls the trigger out of self-interest and quotes history to avoid responsibility or pangs of conscience.  No man possesses sufficient retrospective ability to justify his deeds – murder especially.”

Let us all heed this warning.

Mr. Chair, Russia has turned many of Ukraine’s once bustling cities to ruin with devastating shelling and bombing.  Russian soldiers have brazenly looted businesses and private residences.  And Russia continues to lie to the world while it continues its war of aggression, the likes of which Europe has not seen since 1945.

In Kyiv, at the center of Peremohy Avenue (Victory Avenue) stands an obelisk with the inscription:  To the Hero City of Kyiv.  After the end of the Second World War, the Soviet Union declared Kyiv, Sevastopol, and Odesa as “hero cities” because of the fierce resistance they showed the Nazi invaders at great cost to themselves.  Joining that list of hero cities today are Kharkiv, Chernihiv, Mariupol, Kherson, Hostomel and Volnovakha.  Places like Sumy and Irpin are now familiar to the world.  Ukrainian resistance in these and other cities, towns, and villages has been uncompromising.  It has been inspiring.  It has also been tragic.  And it was unnecessary.

In ultimate contrast to the many examples of heroism by Ukraine’s forces and ordinary citizens are the manifestations of Russia’s barbaric and botched invasion, rife with violence, abductions, and intimidation against civilians, community leaders, journalists, and clergy.  There are reports of forced relocation of civilians, including children, from Ukraine to Russia,, as well as reports of abductions of democratically elected officials, journalists, and others who dare speak out against Russia’s aggression.  The editor of the media outlet “Novy Den” was kidnapped in Kakhovna March 12.  He reported his captors wanted to “break” him to send a message to all journalists that “you will be crushed.”  It is clear that the Kremlin desperately fears the truth.  But the truth will come out.  And those who try to legitimize this evil war will forever bear this burden, no matter how cynical, how cruel, how brainwashed.

Mr. Chair, as Secretary Blinken announced yesterday, the United States assesses that members of Russia’s forces have committed war crimes in Ukraine.  This sobering assessment is based on a careful review of information from public and intelligence sources.  We are committed to pursuing accountability, using every tool available.  That’s why we joined 44 other OSCE participating States in establishing an Expert Mission, with Ukraine’s support.  The Mission’s work will inform international accountability mechanisms, including criminal prosecutions as appropriate.

The world will hold Russia to account for its actions in Ukraine. We have seen video showing Russian forces firing on peaceful protesters, nursing homes, hospitals, shopping malls, schools, and churches.  On March 18, Russian troops detained Oleh Nikolayev – an Orthodox priest – in Berdyansk and took him to an undisclosed location.  He is still missing.  NGOs report at least 28 houses of worship or spiritual centers have been hit by Russian attacks over the last month, including Orthodox cathedrals, the Synagogue in Kharkiv, and mosques in Kostriantynivka and Mariupol.

Mr. Chair, Russian forces have fired on nuclear power stations and  chemical plants with utter disregard for the ecological and humanitarian disaster it was courting.  Russian forces have killed and injured Ukrainian and international journalists.  There are reports of rape by Russian forces.  It seems like every day the Russian Federation sinks to new lows.

It is not hard to understand why the people of Ukraine have resisted so fiercely – Russia is trying to erase their country from the map, destroying the work of past and present generations in the process.

But Russia will fail.  Ukraine will prevail.  And the United States will stay the course, providing unprecedented amounts of security and humanitarian aid to Ukraine for as long as it takes.  Sanctions on Russia have already crippled its economy and exiled it from the international financial system.  Russia and Belarus are pariah states.  And more is coming if they do not change course.

As we meet here in Vienna, NATO is holding an extraordinary summit in response to Russia’s brutal aggression.  After the summit, President Biden will join G7 leaders and address the European Council.  NATO, G7 and EU leaders will continue to send a clear and unified signal to Russia that we remain more united than ever and determined to support Ukraine in defending itself against this unprovoked aggression; to degrade Russia’s war machine; to defend human rights in Ukraine and neighboring countries; and to fortify NATO by enhancing our posture on the eastern flank.

This war is only one month old but it will stain the Kremlin’s leadership forever.  To the representatives of the Russian Federation, I say: end it now, save the lives of your own soldiers – the many young conscripts duped into fighting, sometimes against their own relatives – and end this senseless suffering.  You are not just killing and plundering a peaceful neighbor, you are bringing ruin to your own country.  End this war now.