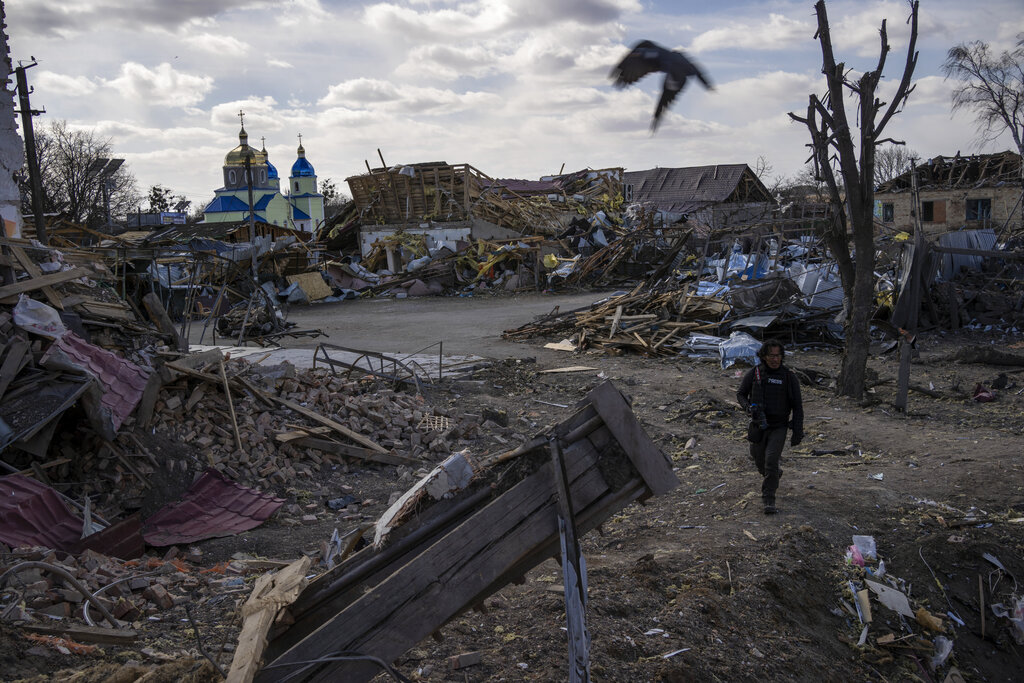 A journalist walks amid the destruction after a Russian attack in Byshiv on the outskirts of Kyiv, Ukraine, Sunday, March 27, 2022. (AP Photo/Rodrigo Abd)

Thank you, Mr. Chair, and I thank Governor Kim as well for his remarks.  I join the Chair in expressing my condolences for all those who have been needlessly killed by Russia’s war of choice.

Today is the 36th day of President Putin’s unprovoked assault on Ukraine.  Five long weeks during which Ukraine’s courageous citizens have fought a daily and hourly battle for survival, and for the sovereignty and independence of their country.  Five long weeks during which Ukraine’s military has held its ground and begun pushing Russia’s forces back.

Yet even as Ukraine’s defenders thwart President Putin’s imperial delusion of installing a Kremlin-controlled puppet regime in Kyiv, the Russian Federation continues to intensify its brutal sieges of Chernihiv, Kharkiv, and Mariupol, and to redouble its assault on the Donbas in an apparent attempt to carve out additional territory in southeastern Ukraine.

Mr. Chair, Russia may be scaling back its military objectives, but it is not scaling back its barbaric tactics.  Russia continues laying waste to Ukraine’s cities, relentlessly shelling and bombing, and impeding urgent humanitarian access at the risk of starving to death those who remain in their homes. It is inhuman.  And now we are starting to see more and more reports that Russia is forcibly deporting Ukrainian citizens to Russia.

Mr. Chair, the actions of Russia’s military authorities in the last five weeks indicate the Kremlin is operationalizing a plan to seize control of the south and southeast of Ukraine and transform the regions into grotesque Russian proxy states along the lines of the so-called “DNR” and “LNR.”  The Russian Federation’s plan, now that it realizes the people of Ukraine will never accept its subjugation, is apparently to clear the local population in these areas.  I know we are all shocked by mounting reports that Russia’s forces are forcibly transferring to Russia anyone who shows signs of resistance, as well as reports of rape and torture.

The Mariupol city council has noted Russia’s forces continue to forcibly deport locals, confiscating their Ukrainian passports, running them through so-called filtration camps, and sending them to remote locations in Russia.  Eyewitnesses have reported one such camp is operating in Dokuchaevsk, in the Donetsk region, with Russian Federal Security agents interrogating the interned Ukrainian civilians about whether they have relatives serving in the Ukrainian army or police.

These reports suggest the forced relocations of Ukrainian civilians to Russia are systematic, pre-planned, and intended to be permanent.  We are hearing that Russian forces are also confiscating Ukrainians’ identity documents at these filtration centers, separating families, and taking away mobile phones.  Further, Russia has refused to allow safe passage of civilians to territory under the control of the Ukrainian government, indicating its intent to forcibly and permanently displace Ukrainian civilians to Russia.  This includes children, women, and the elderly – in one case involving a 92-year-old woman from Mariupol. Documentation and the preservation of evidence is absolutely critical.

It is hard to grasp the fact of forced deportations in the 21st century.  Nearly 80 years ago, the Kremlin ordered 200,000 Crimean Tatars to be forcibly resettled to the Soviet Union’s Central Asian republics.  The Supreme Council of Crimea finally declared in 1989 that the Soviet-era deportations of the Tatars were a criminal activity – and those responsible within today’s Kremlin will similarly, eventually, be held accountable for the atrocities committed in the current conflict.

The Office of the UN High Commissioner for Human Rights (OHCHR) reported that it had documented the arbitrary detention and enforced disappearance of 24 local Ukrainian officials in regions under the control of Russia’s military and noted several instances that resembled “hostage-taking.”  Many of us in this room had the opportunity to hear from the mayor of Melitopol yesterday, as he described the harrowing account of his six-day detention by Russia’s forces during which he was held incommunicado and repeatedly interrogated at gunpoint by Russian officers.  Unfortunately, his story is not unique.  OHCHR also reported that 21 journalists and civil society activists who vocally opposed the Russian Federation’s invasion have been detained in several regions of Ukraine.

Kherson’s mayor has also described Russia’s forces terrorizing the local population, detaining activists, searching homes, robbing businesspeople, and planning to require schools to conduct classes in the Russian language beginning on April 1.  Other reports indicate Russia’s forces have gathered local community leaders and asked for information on where the so-called “fascists” live, by which they apparently mean those citizens who display Ukraine’s flag or do not accept the Russian Federation’s authority.  Locals describe increasingly difficult conditions, with food deliveries blocked, houses destroyed, corpses left on the street, people disappearing.  Cultural and religious leaders are not spared, as demonstrated by the Russian Federation’s detention of Oleksandr Knyha, Head of the Kherson Oblast Music and Dramatic Theater, as well as the reported abduction of Serhiy Chudynovych, a priest in the Orthodox Church of Ukraine in the city of Kherson.

The Russian government also continues its campaign to silence all dissenting domestic voices, clearly terrified of what would happen if its own people knew the truth about the Kremlin’s crimes against Ukraine.  This week, as referenced by the EU ambassador, under pressure from Russia’s new draconian censorship laws enacted since February 24, another respected independent outlet, Novaya Gazeta, led by Nobel Peace Prize Laureate Dmitry Muratov, was forced to suspend its operations.  After the recent closures of numerous other media outlets, including Ekho Moskvy and Dozhd TV, the people of Russia are now left without access to any major independent media.  The general public’s main source of information about this war is from a government that, first off, refuses to call it a war, and second, feeds its people continuous lies and disinformation, such as the outrageous claim that Ukraine’s troops are destroying their own cities.

Russian journalists who interviewed Ukraine’s President Zelenskyy on Sunday were unable to publish the story in their own country without risking up to 15 years in prison for violating these new censorship laws.  Silencing independent voices, including that of a Nobel Prize winning journalist, are the hallmarks of a totalitarian police state, and a sad commentary on what Russia has become.

And it’s not just Russia.  Belarus too is complicit.  For almost two years, the Lukashenka regime has carried out a brutal crackdown against civil society.  It holds over 1,100 political prisoners, denies its citizens access to information, brutally suppresses dissent, and now actively facilitates Putin’s war against Ukraine.  It is the Lukashenka regime that is allowing its territory to be used as a launch pad against Ukraine, and we assess that missiles have been fired from Belarusian airspace on Ukraine.  The Lukashenko regime therefore clearly bears responsibility for the horrifying invasion unfolding across Ukraine.

Dear colleagues, I’d like to close by recounting President Biden’s words in Warsaw last Saturday reminding us that no matter how horrific the Russian Federation’s attacks in Ukraine, the oppressors will never prevail.  As President Biden said, “Time and again history shows that it’s from the darkest moments that the greatest progress follows.  A dictator bent on rebuilding an empire will never erase a people’s love for liberty.  Brutality will never grind down their will to be free.  We will have a different future, a brighter future, rooted in democracy and principle, hope and light.”

We will help the people of Ukraine fight for this future for as long as it takes.