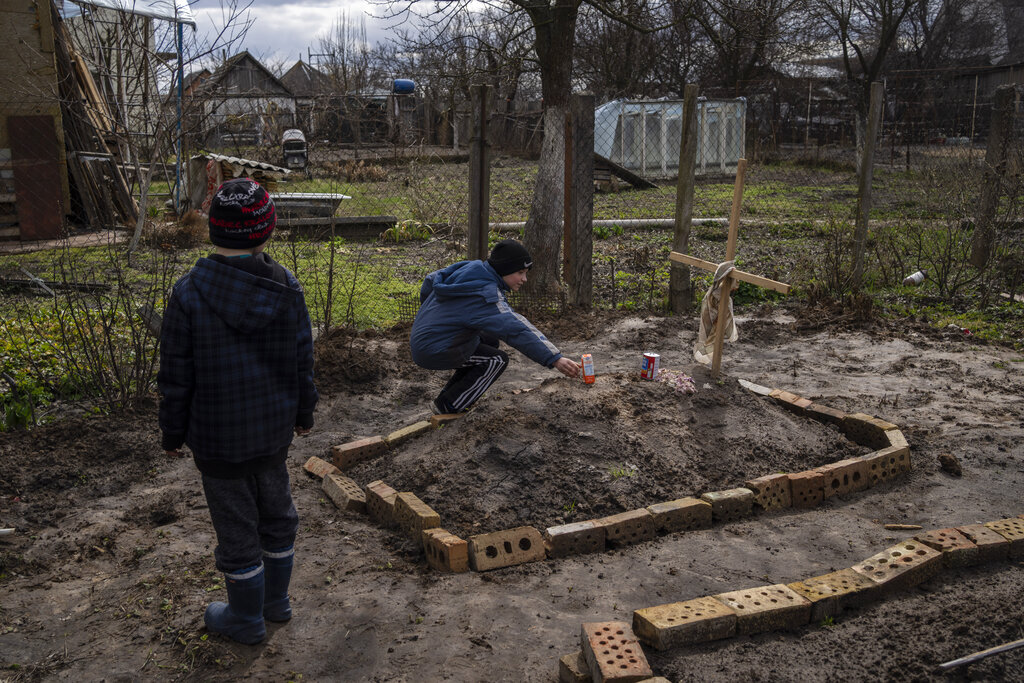 In the courtyard of their house, Vova Tanyuk, 10, places an orange juice on the grave of his mother. (AP Photo/Rodrigo Abd)

As we enter the seventh week of Russia’s unprovoked and vicious war on Ukraine, I want to spend a few minutes detailing the human costs of the tragedy wrought by the Russian Federation, especially on the most vulnerable members of Ukrainian society: children.

Although we warned this Council repeatedly in the weeks and months prior to February 24 that Russia was planning an invasion that would bring about a massive human and humanitarian tragedy – predictions that the Russian Federation’s representatives at the time dismissed as “hype” – I must admit that it was difficult then to fully and adequately articulate the monstrous atrocities that would befall the Ukrainian people.  Wickedness is usually hard to predict, but it is always shocking.

Russia’s assault on Ukraine has so far violently taken the lives of over 120 children and injured at least 171 – numbers that the UN admits are likely to be a significant undercount.

Children who six weeks ago were playing carefree with their friends in schoolyards throughout Ukraine, kicking around footballs, daydreaming of superheroes, dressing up dolls and jumping rope.  Children who had their whole lives ahead of them.  Children who today should be outside enjoying the warm spring sunshine but are instead crushed under the rubble of an apartment building or a theater or a school leveled by a Russian missile.  One struggles, painfully, to imagine what those last, terrifying moments must have been like for them.

The father of two-year-old Stepan Shpak, who was buried by debris from Russian shelling near Kyiv on March 16, summed up his own senseless loss, asking, “What is this all for? For what? A two-year-old child who hasn’t experienced life yet.”

Or Kirill Yatsko, an 18-month-old boy, killed after his home in Mariupol was shelled by Russian forces in early March.  Video footage from Sky News showed the little toddler being taken to a hospital, wrapped in a blanket, injured by shrapnel.  The footage shows his mother crying “Why, why, why?” after his death.

Or consider Vova Karivansky, a young boy whose mother was interviewed by NPR.  Vova was recovering in a hospital after his body was grazed by multiple bullets, his jaw wired shut after many surgeries.  Vova sustained his injuries when the car he was traveling in was shot by Russian forces as his family fled the neighborhood they lived in outside of Kyiv.  Vova’s mother, Natalia, explained what happened: “So yes, we were together, the whole family in one car.  And the car was fired at.  So [my husband] died there on the spot.  And just when we started screaming, the children are in here, it was too late for my husband and for Maxim.”  Maxim, by the way, was her 6-year-old nephew.

There are many more such stories, each as painful as the last.  That is why it is so important to continue documenting the fact that Russia’s forces have destroyed schools and shelters, including those like the Mariupol drama theater, which had the word “children” written outside in massive letters by parents desperate to save the lives of their children.  Let us also not forget that as Ukrainian mothers have tried to take their children to safety, Russia’s forces have repeatedly bombed humanitarian corridors.  As Ukrainian parents seek to keep their families together at all costs, Russia’s forces deport Ukrainian women and children to Russia.

And in the last few days, as the distinguished Ukrainian ambassador has just noted, we have all heard the absolutely chilling reports from Mariupol of mobile crematoria being used to dispose of human remains.  It is disgusting.

Russia’s war has displaced 60 percent of all children in Ukraine from their homes, including over 2 million refugees and 2.5 million internally displaced.  More than half of all Ukrainian refugees are children.  Children and their families remain trapped by fighting throughout eastern Ukraine, without access to drinking water, food, or medicine.  Melitopol Mayor Ivan Fedorov told many of us in this Council just last month that Russia regularly blocks aid shipments meant for these trapped civilians or steals the aid before it can arrive.

Even among those children who have managed to flee, UNICEF’s Executive Director Cathy Russell has underlined their vulnerability to risks of trafficking and other forms of exploitation, saying, “As the number of children fleeing their homes continues to climb, we must remember that every single one of them needs protection, education, safety and support.”

A growing body of research indicates that childhood trauma profoundly affects a child’s development, with potentially lifelong consequences for learning, behavior, and health.  Ukraine’s children will require sustained psychosocial support to process the horrors they are being forced to endure week after week.

Mr. Chair, Ukraine’s children embody the moral urgency of this moment.  The United States and other donors continue to expand the scope of our humanitarian work to meet the challenge.  We are leveraging every tool within the OSCE to enhance our humanitarian support to Ukrainians in need.  We also continue to expand our support for humanitarian partners, including the World Food Program, which is providing over a million people in Ukraine with emergency food assistance.  Our humanitarian funding additionally supports the operation of mobile medical teams that provide continued primary health services, psychological support, trauma care, and vaccinations to vulnerable populations in Ukraine, including children, to ensure they have access to services and are protected from the risks such as child-trafficking.  We also continue to work to ensure the delivery of essential supplies to children and their families sheltering in besieged cities, such as Mariupol.

Mr. Chair, let there be no doubt: Russia’s war on Ukraine – the death and trauma that Putin’s regime is inflicting on Ukraine’s next generation – will never be forgotten.  These young witnesses to Russia’s acts of violence against their families and country will make the next generation more committed than ever to the freedom and independence of their country – just as the children of World War II who dreamed of a Europe free and at peace.  As Vasily Grossman once wrote, “In the cruel and terrible time in which our generation has been condemned to live on this earth, we must never make peace with evil.  We must never become indifferent to others or undemanding of ourselves.”