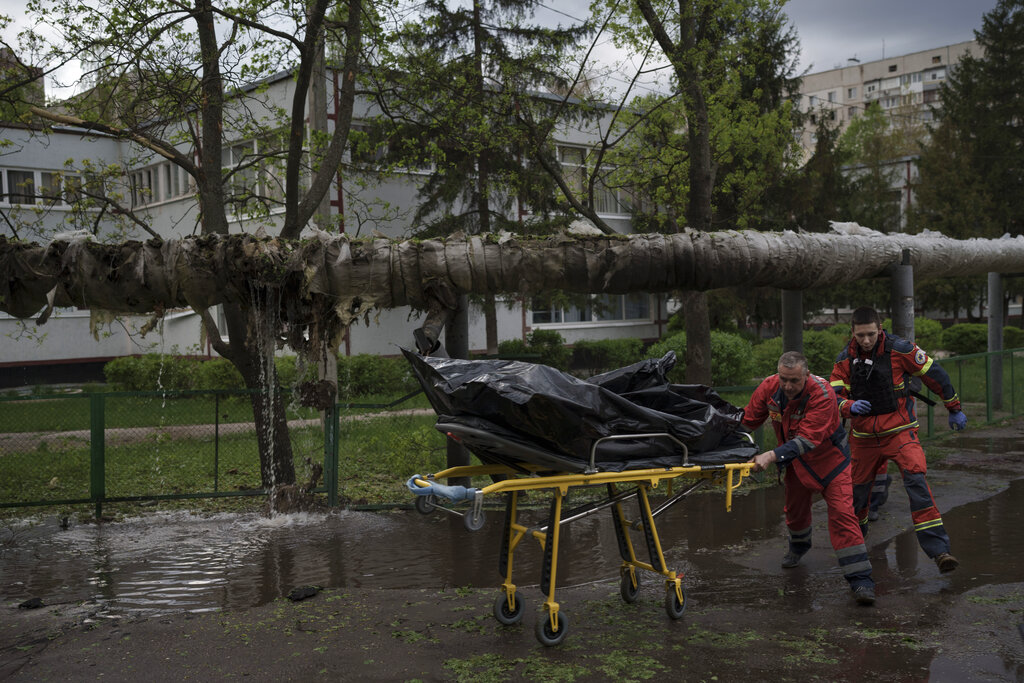 As we enter the third month of Russia’s unprovoked war of aggression, Ukraine stands as strong, united, and resolute as ever. The people of Ukraine are continuing to repulse Russia’s barbaric campaign of intimidation and subjugation.  Over the past two months, Ukraine’s courageous defenders have repelled Russia’s vicious attacks on Kyiv and Kharkiv and sent Russia’s forces scrambling back over the border.  Russia is failing, and Ukraine is succeeding.  But the human and humanitarian costs of Russia’s assault have been enormous: Bucha, Borodyanka, Mariupol, and Irpin are – tragically – only the first of what are likely to be many municipalities that will one day bear monuments honoring the victims of Russia’s atrocities.

Mr. Chair, the courage and solidarity of the people of Ukraine in resisting Russia’s monstrous aggression continue to inspire the world.  In the face of Ukraine’s determined resistance, Putin’s forces are refocusing their brutal campaign on Ukraine’s south and east.  In its attempt to subjugate these parts of Ukraine’s territory, the Kremlin is working from a well-worn playbook that steals from history’s darkest chapters.

We have information that Russia’s planning for its further invasion of Ukraine includes a forced capitulation of Ukraine’s democratically elected government, including dissolving all local municipal governments in Ukraine.  New governance structures were to be set up in “liberated” territories under Russian control.

Plans for a new government and new constitution are being developed by Russian officials and so-called “separatists.”  This planning includes a moratorium disallowing legitimate Ukrainian leaders and those supporting Ukraine’s legitimate government from any leadership positions.

This is straight out of Russia’s playbook, which has repeatedly exploited phony “electoral” processes with attempts to impose so-called “new realities,” including holding sham referenda in an attempt to lend a semblance of legitimacy to subjugation.  We saw this repeatedly in 2014, as the Kremlin orchestrated so-called referenda in the Ukrainian regions of Crimea, Luhansk, and Donetsk – each time with faked high percentages of public support.  The reality is that Russia installed puppet regimes dependent on Russian bribes, and orchestrated nebulous “people’s councils” to create phony constitutions – all an attempt to lend an air of legitimacy to the sham. Russia further subjected the local population to intense disinformation portraying the legitimate Ukrainian government as a Western-inspired coup.  All fake.  Yet the danger over time has become clear and is a stark warning for Russia’s intended next steps in any additional Ukrainian territory it forcibly seizes.

Mr. Chair, the Kremlin may now be preparing to stage sham referenda in Ukraine’s south and east – in the areas it has illegally seized since February 24 – again in a futile attempt to legitimize its illegal invasion and assert control over these areas – control resulting from Russia’s brutal use of force against Ukraine.  On Tuesday, Russian forces claimed they had “liberated” the Kherson region of southern Ukraine, and they have now decreed that they will start using the Russian ruble.  Our Ukrainian colleagues have been warning that Russia may soon stage a sham referendum in Kherson, supposedly asking residents if they approved of the “independence” of an entity called “the Kherson People’s Republic.”  Of course, no such entity exists outside of the Kremlin’s web of lies.  And the international community must make clear that any such referendum will never be recognized as legitimate, just as the Ukrainian people have already made clear they will never support this Russian invasion.

Unfortunately, however, such lies have real consequences.  These falsified, illegitimate referenda will undoubtedly be accompanied by a wave of abuses against those who seek to oppose or undermine Moscow’s plans.

We should expect Russia to intensify its ongoing forced transfers of local populations from areas of Ukraine’s south and east to Russia or Russia-controlled parts of the Donbas via so-called “filtration camps.”  We see credible reporting that Russia’s forces are rounding up the local civilian populations in these areas, detaining them in these camps, and brutally interrogating them for any supposed links to the legitimate Ukrainian government or to independent media outlets.  There are alarming reports that those suspected of having such connections are being beaten or tortured before being transferred to the so-called “Donetsk People’s Republic,” where they are reportedly disappeared or murdered. Reporting indicates that many civilians in these filtration camps who “pass” the interrogation are transferred to Russia or Russia-controlled Donbas, including via Belarus.  Our information indicates Russia is abducting, torturing, and/or murdering locally elected leaders, journalists, and civil society activists, as well as religious leaders.

The Mariupol mayor’s office reports that four filtration camps are operating in the city.  The accounts of these camps are harrowing.  An escapee from Mariupol described the experience as follows: “The filtration camps are like ghettos,” she said.  “Russians divide people into groups. Those who were suspected of having connections with the Ukrainian army, territorial defense, journalists, workers from the government – it’s very dangerous for them.  They take those people to prisons to Donetsk, torture them.”

Colleagues, what these reports describe brings back horrific memories of a bygone era.  Invading a neighboring country, removing its legitimately elected government, herding its population into “filtration” camps, and holding sham referenda in a transparent attempt to cover its aggression with a false veneer of legitimacy is a wholly barbaric enterprise.

To stop this, we must all act with a greater sense of urgency.  These statements of concern in this Council are necessary but hardly sufficient.  The United States, for its part, is committed to pushing as hard as we can as quickly as we can to get Ukraine the support it needs to defend against this brutal war of aggression.  As Secretary Blinken and Secretary Austin told President Zelensky in Kyiv last Sunday, the United States intends to obligate more than $322 million in Foreign Military Financing for Ukraine.  This brings the total U.S. security assistance to Ukraine since the start of Russia’s renewed invasion on February 24 to roughly $3.8 billion, or about $60 million per day.

Secretary Austin also announced in Kyiv that the Department of Defense will expand military training for Ukraine’s service-members on certain weapons systems being provided, and he highlighted U.S. efforts to accelerate the delivery of these weapons, which are now arriving within days of announcement.  The United States will continue to coordinate the shipment of additional heavy weaponry, ammunition, and spare parts from other countries – including many of those seated around this table – to Ukraine.  We are returning American diplomats to Ukraine as we stand shoulder to shoulder with the Ukrainian government and people, and we will work with our Congress as we plan to resume full operations at our Embassy in Kyiv as soon as possible.

Thank you, Mr. Chair. I request this statement be attached to the Journal of the Day