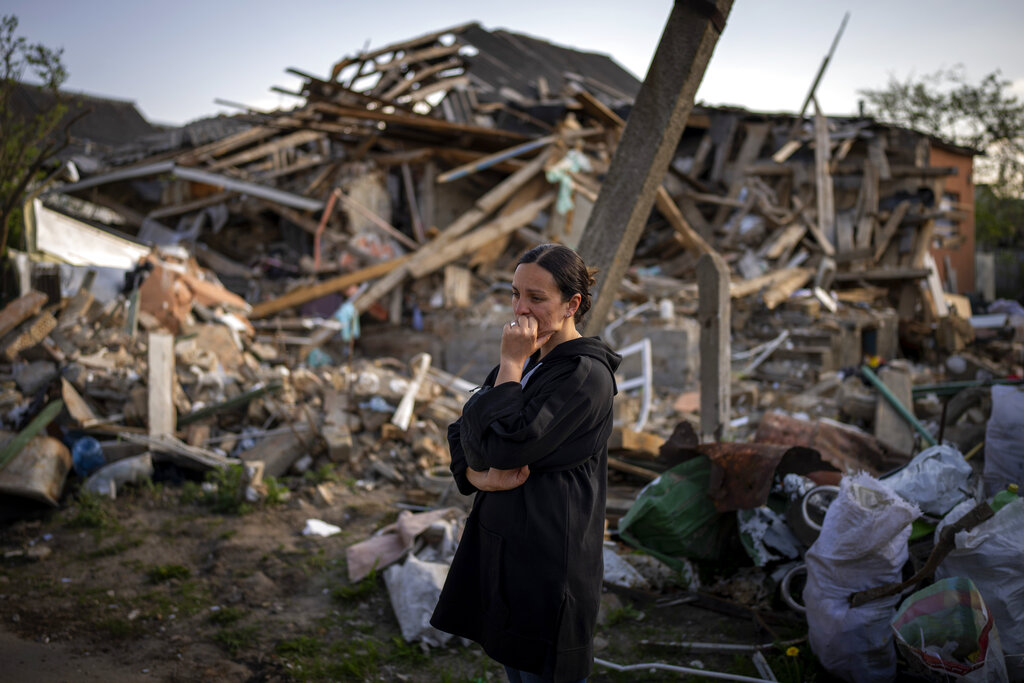 Anna Shevchenko, 35, reacts next to her home in Irpin, near Kyiv, Tuesday, May 3, 2022. The house, built by Shevchenko's grandparents, was nearly completely destroyed by bombing in late March during the Russian invasion of Ukraine. (AP Photo/Emilio Morenatti)

Over the past 10 weeks, the world has watched in horror as Russia’s forces in Ukraine have committed atrocities of unspeakable brutality.  Each reported execution or rape is evidence of a serious crime of the utmost brutality and depravity.  Yet Russia’s soldiers are not committing these acts in isolation.  We heard from the Moscow Mechanism experts that there is indeed a clear pattern of violating international law on the part of Russia’s forces.  With each passing day, this pattern becomes more apparent.

Mr. Chair, it is clear there is a connection between the dehumanizing rhetoric spewed by the Russian government and its representatives, including those who sit in this Council, and the atrocities being committed by Russia’s soldiers in Ukraine.

The rhetoric we repeatedly hear from Russia’s representatives denies that Ukraine is historically or culturally distinct from Russia or that it has the right to exist as a sovereign, independent nation-state.  It tries to erase the very idea of a Ukrainian identity, and it describes the people of Ukraine in the vilest terms.

First, the Kremlin contends that Ukraine is an artificial construct, that Ukrainians and Russians are supposedly “one people,” and that Ukraine’s sovereignty is possible only as part of the Russian Federation.  Russian President Putin wrote these very points in an essay just a few months ago.

Next, the Russian government contends that this national identity is interchangeable with Nazism and tries to convince the Russian people into believing that the Ukrainian nation – by its very definition – is intent on waging genocide against Russians.  We have seen these rhetorical devices before in history.  And this hate speech is deployed on a repeat loop by Russian government officials and state media.  An article published by RIA Novosti in early April called the very existence of an independent Ukraine “Nazism.”  If all Ukrainians – including children – are Nazis, then imagine what sort of license that gives to Russian soldiers on the front lines. A license that gets transmitted from this very Council every week.

On several occasions, Russia’s leaders have also layered on the absurd claim that Ukrainian leaders are drug addicts.  Drug use, they argue, is the depraved byproduct of an open, democratic, Western society.  The enemy, therefore, uses drugs.  Patently ridiculous, but this is what they say.

Placing an entire nation outside of humanity and outside of the code of moral conduct is a frightening undertaking.  The atrocities committed by Russia’s forces against the people of Ukraine are the depraved outgrowth of this dehumanizing disinformation, which has been force-fed to Russia’s conscripts, indeed to all of Russia’s citizens, for years.

The survivors of Russia’s atrocities and other abuses in Ukraine have repeatedly noted how Russia’s soldiers invoked Nazism at the time they committed their crimes. Iryna Abramova recalled the morning of March 5 when a Russian commander ordered her husband, Oleh, into the street.  He asked, “Where are the Nazis?”  When Iryna told him there were no Nazis, the commander responded, “We have come here to die, and our wives are waiting for us, and you started this war.  You elected this Nazi government.”  Then they told Oleh to kneel, ordered him to strip off his shirt, and shot him point-blank in the head.  Recalling this, Iryna could not help but state with bewilderment, “They loved the word Nazi for some reason.”

The Russian state has been so consumed by its own perverted narrative that its Foreign Minister went so far this week as to claim, as my Ukrainian colleague has pointed out, that President Zelenskyy is an anti-Semite, all in an attempt to denigrate a country that freely elected an ethnically Jewish president – and native Russian speaker, I might add – with the absurd suggestion that this is the manifestation of Nazism.  Russia’s Ministry of Foreign Affairs even went so far as to put out a public treatise that drew a parallel between Zelenskyy as the democratically elected President of Ukraine and Jews who collaborated with Nazis during the Holocaust.  When the Israeli government demanded an apology, Russia accused Israel – that’s right, Israel – of supporting Neo-Nazis.  Though patently absurd to all of us in this Council, the Kremlin’s dehumanizing lies about Nazism and Ukraine are specifically intended to lead to one preposterous conclusion: that anyone who recognizes the legitimacy of the Ukrainian state and the distinct identity and will of its people – in other words, anyone who supports a sovereign, democratic, inclusive, and independent Ukraine – must somehow also be supporting Nazis.  Not even the Israeli government is immune from this twisted logic.

Mr. Chair, the Kremlin’s dehumanizing lies are not merely the genesis of its atrocities; they are the foundation for the Kremlin’s program to suppress Ukrainian culture and identity.  As we have said over the last few days, we have reason to believe the Russian Federation plans to attempt to forcibly annex the so-called Donetsk and Luhansk “people’s republics” in the coming weeks or months and that Moscow is considering a similar operation for Kherson.  Russia has forced schools in areas under its control in the Kherson region to switch to the Russian curriculum.  It has forced the local population to use the Russian ruble. It has cut off the internet and cell phone transmissions to prevent reliable, factual communications.  It has also started changing the names of towns and villages in the areas it controls.

Throughout history, we have seen the dangers of dehumanizing propaganda exploited to provide  a quasi-ideological justification for the most heinous of undertakings.  Reports of “filtration camps” to conduct forced transfers of Ukrainian citizens into Russia are the latest example.

Mr. Chair, in spite of Russia’s brutal aggression, the people of Ukraine know who they are.  No amount of lies or dehumanizing disinformation from the Kremlin will change that.  No bullets, no mortars or missiles can ever purge Ukraine from the hearts of its people.