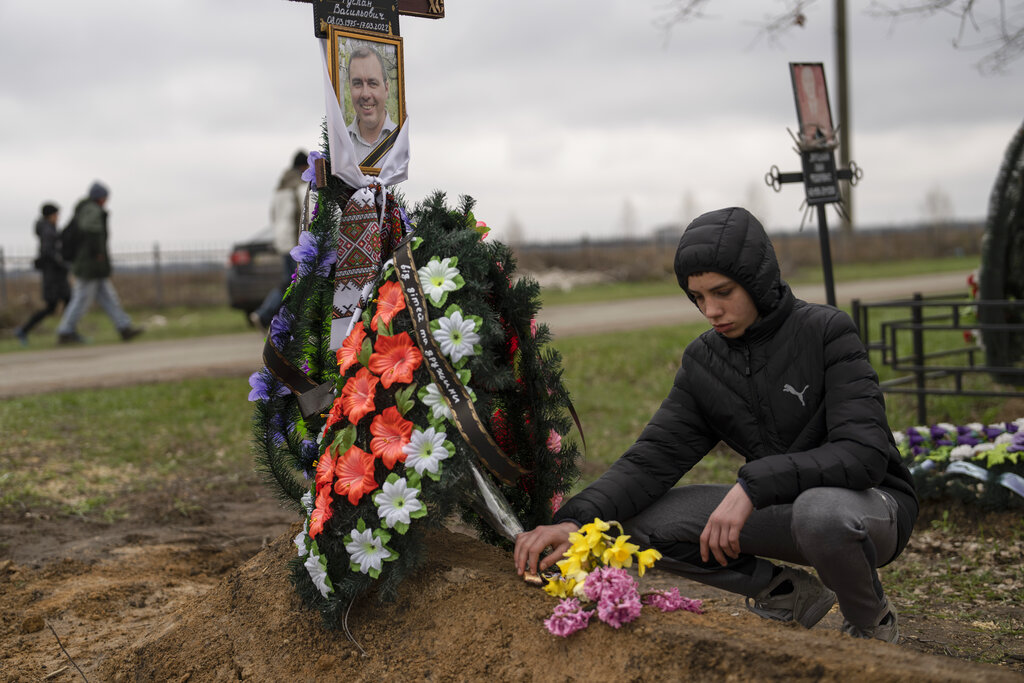 Yura Nechyporenko, 15, places a chocolate at the grave of his father in Bucha. The teen survived an execution attempt by Russian soldiers while his father was killed, and now his family seeks justice. (AP Photo/Petros Giannakouris)

As we mark 11 weeks of Russia’s brutal war against Ukraine, the Kremlin’s war aims are coming into sharper relief.  While the Kremlin has clearly failed in its efforts to subjugate the entire Ukrainian nation and take over its capital with a quick decapitation strike, Russia’s plan to take over the southeast regions of Ukraine is moving ahead.  This effort includes a plan to engineer a more pliant population in these regions.

First, Russia is pursuing a vicious and brutal military campaign to gain control of the regions.  In the process, Russia is leaving a trail of decimated landscape and destroyed civilian infrastructure, including hospitals, schools, theaters, food storage facilities, cultural heritage sites, and of course apartment buildings and houses, with a staggering human toll.

Next, Russia’s forces are removing the democratically elected officials in various municipal councils, who according to very credible and disturbing reports are being kidnapped, interned, disappeared, and sometimes killed.  In their place, according to these reports, Russia is substituting its puppets and proxies, who, like their counterparts in the so-called Donetsk and Luhansk “people’s republics,” operate in the style of a local mafia, relying on violence and terror.

As the United States has previously warned, we are particularly concerned about Kherson, where Russian forces have reportedly removed local officials, installed an illegitimate pro-Russian puppet administration, and forced the adoption of the Russian ruble over the Ukrainian hryvna.  In recent days, these illegitimate proxies have increasingly indicated an intention to “petition” Russia to annex Kherson.  Kremlin spokesman Dmitry Peskov even drew parallels to Russia’s illegal annexation of Crimea.

Russia is clearly seeking to assimilate these regions into its orbit, forcing schools to adopt the Russian curriculum, changing place names to Russian or Soviet-era names, installing monuments to Soviet leaders, and trying to erase all signs of Ukrainian culture or identity.

Finally, Russia’s soldiers are forcibly relocating civilians, whose homes, cities and towns have been mercilessly barraged for months with shells, missiles, and bombs, to Russia – the very country causing all the needless suffering.

As many eyewitness accounts have described in detail, Russia is subjecting many of these civilians to brutal interrogations in so-called “filtration camps,” a process Russia planned before its further invasion of Ukraine on February 24.  During this so-called “filtration” process, Russia’s forces reportedly process and interrogate detained Ukrainian citizens to identify anyone with ties to the Ukrainian government or military, as well as individuals with “pro-Ukraine” convictions.  There are numerous reports of detainees’ cell phones being taken away, passwords coerced from their owners, social media and messages scanned for any sign of opposition to Russia’s barbaric war against Ukraine, and in some cases reports that their passports are confiscated.

The United States assesses that Russia’s forces have relocated at least several thousand Ukrainians for processing in these “filtration camps,” and evacuated at least tens of thousands more to Russia or Russia-controlled territory, sometimes without telling evacuees of their final destination.  From Mariupol alone, we assess that Russia’s forces have forcibly displaced thousands of civilians into Russian territory.

Numerous eyewitness accounts indicate that “filtering out” entails beating and torturing individuals to determine whether they owe even the slightest allegiance to the Ukrainian state.  According to these reports, those who are judged to have such an allegiance are transferred to the so-called “Donetsk People’s Republic,” where they face a dark fate.

According to one survivor, “If a person was suspected of being a ‘Ukrainian Nazi’, they took them to Donetsk for further investigation or murder…. Everybody was afraid to be taken to Donetsk.”  Another survivor recounted a conversation she overheard between two Russian soldiers as she and her family were undergoing “filtration” outside of Mariupol.  “What did you do with people who didn’t pass the filtration?” one soldier asked.  The response: “Shot 10 and stopped counting.”

Mr. Chair, accounts of this brutality and forced displacement are happening right now, as we speak, and these actions amount to war crimes.

Survivors of this process describe a coercive, multi-destination journey through various “filtration” waypoints in the Russian-controlled eastern Ukraine, and eventually across the border into Russia itself.  In Mariupol, Russia’s soldiers reportedly evicted civilians from shelters and forced them onto buses bound for these filtration camps – sometimes also referred to as “registration camps” – without telling them where they were going and often without the opportunity to collect their personal documents. Survivors describe these centers as either makeshift encampments composed of military tents or civilian infrastructure such as schools or sports centers.  Commercial satellite images show these encampments in various locations across Ukraine’s southeast.

Victims describe an invasive and humiliating process of inspection at these centers.  Russia’s soldiers photograph victims from various angles, fingerprint and physically examine them for tattoos, inspect their cell phones and download their contacts and data onto devices, and record their biographic information in a variety of databases.  Some victims report being interrogated by suspected Russian intelligence officials.  In some cases, Russia’s soldiers confiscated passports, identification documents, and cell phones altogether.

Once in Russia, survivors report that some Ukrainian citizens are permitted to stay with friends and family living in Russia but that people without money or documents are put onto trains destined for cities hundreds of miles away, to be given jobs by Russian authorities.  According to Russia’s own Foreign Minister Sergey Lavrov, over one million people have been relocated from Ukraine to Russia since February 24.

The civilians who evacuated the Azovstal steel plant on May 1st and 6th experienced the horrors of Russia’s filtration process firsthand, after surviving two months in basements and bunkers as Russia destroyed their city.  One survivor recalled, “We were stripped, they checked scars and tattoos, inspected the women’s underpants.”  The survivor recounted how women who knew members of Ukraine’s military or police were threatened and told they will “receive the men’s heads sent back to them in boxes.”  Another escapee from Mariupol, a 17-year-old girl, recounted the sexual violence on display during her family’s filtration, saying: “My legs started to tremble when a soldier who was lying on a mattress said [to another soldier]: ‘Don’t you like her? There will be more women later.  We’ll find something.’”  She noted that the soldiers beat her father for no apparent reason before letting her family through.

Mr. Chair, as Russia well knows, the forced displacement or transfer of civilians would contravene international humanitarian law – but as we have seen, the Kremlin treats international law with total contempt.

In Donetsk and Luhansk, Russia has sought to normalize these brutal methods of control. There was a time when some commentators actually believed Russia’s puppets and proxies were local so-called “separatists” who independently supported Russia’s invasion.  Now we understand more clearly how Russia engineers the situation on the ground once their forces get a hold of Ukrainian territory.

Mr. Chair, we must not allow this evil to stand.  The United States will continue to help Ukraine defend itself against Russia’s war of aggression, end the unconscionable war crimes committed by members of Russia’s forces, and hold those responsible to account.  Over the course of the past two months, Congress appropriated, and the Administration has made available, roughly $14 billion in funding for security, humanitarian and economic support that has allowed the United States to support Ukraine in its response to Russia’s aggression with a scope, scale, and speed that has never been seen before.  This past Monday, President Biden signed the Ukraine Democracy Defense Lend-Lease Act, providing another tool we can use to provide security assistance quickly to Ukraine.  Our allies and partners around this table are also doing their part, and we recognize their efforts and encourage even more timely support for Ukraine.

Unprecedented sanctions are already exerting a toll on Russia’s economy, and export controls have cut off Russia’s access to critical technology and the supply chains it needs to sustain its military ambitions.  As a result of these controls, Russia is struggling to replenish its weapons and military equipment.  Almost 1,000 private sector companies have left Russia, and reports indicate that more than 200,000 Russian nationals, many of whom are highly skilled professionals, have fled the country.

The NATO Alliance is more united than ever, more resolved to fortify its defense and deterrence capabilities. U.S.-EU cooperation is also deepening, and the coalition of countries who have condemned Russia’s egregious violations of the UN Charter, of human rights, and of the laws of war is growing.  The costs for this barbarity will continue to compound and intensify.

Mr. Chair, the Kremlin has failed in its initial military objective to dominate Ukraine – but its aggression and the commission of atrocities have succeeded in making Russia a global pariah.  We must all remember that victory over tyranny is often hard fought and hard won.  It is the collective duty of our countries to continue our unprecedented support to Ukraine as it fights for the freedom of its country and its people and the values we share.