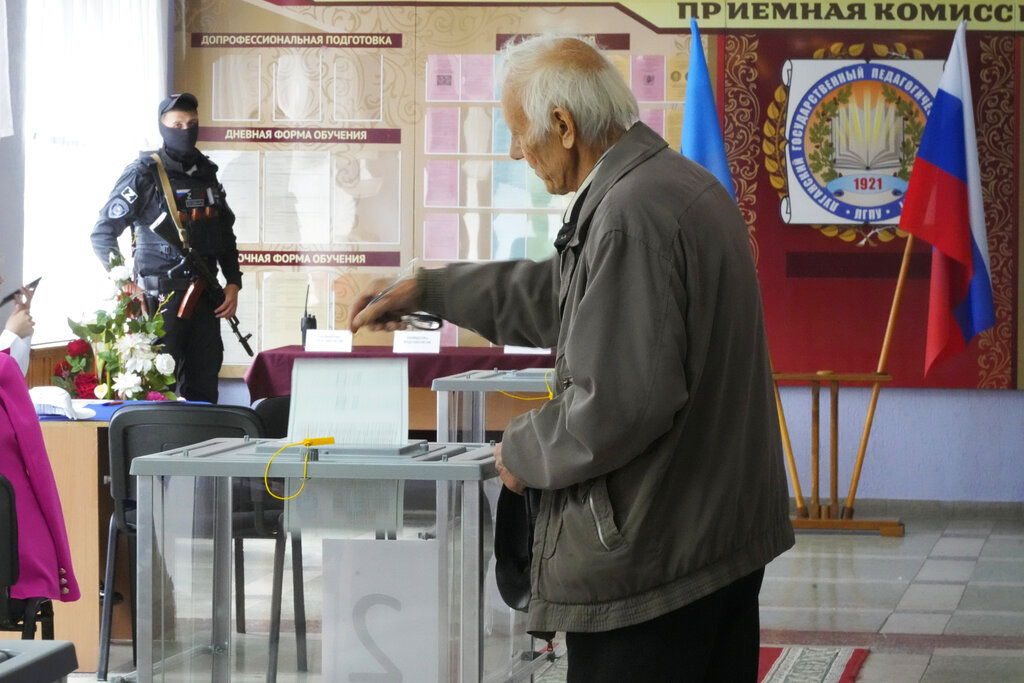 The Russian Federation’s ongoing aggression against Ukraine: Illegal Attempts To Legalize The Occupation Of Eastern Ukraine

As delivered by Karen Donfried,

Assistant Secretary of State for European and Eurasian Affairs
to the Reinforced Permanent Council, Vienna
September 29, 2022

This past week has laid bare for all to see the truth of Vladimir Putin’s war of aggression against Ukraine. Russia’s attempts to annex Ukrainian territory are a blatant violation of the UN charter. Russia’s brutal, neo-imperialist war has no place in the modern world.

The Kremlin’s bankrupt and retrograde objective of territorial conquest in Ukraine was put on full display in recent days through sham referenda rushed through and conducted at gun point in areas controlled by Russia. Unable to win the fight on the battlefield, Russia has instead resorted, in true authoritarian fashion, to twisting the values of democracy and freedom into something unrecognizable in the service of Putin’s appetite to redraw the map of the world whatever the cost. To wield force, coercion, and fear — the cornerstones of his rule and foreign policy — in an attempt to present the world with a fait accompli. His calculation appears to be that he can force the world to accept his unilateralism, his bullying, and acquiesce to his imperial ambitions. He is wrong.

These Potemkin referenda do not fool us. They do not change the facts on the ground. Putin and his Kremlin cronies can lie to themselves and the Russian people, but the world sees the truth.

As was the case with the illegitimate and illegal referendum conducted by Russia’s proxies in 2014 in Crimea, we again see orchestrated attempts to hold a farcical so-called “referenda.”

We see Russia’s soldiers wearing balaclavas and wielding guns, flanking so-called election workers and standing over voters as they fill out ballots, forcing Ukrainian citizens to “vote.” As one resident of a small village in the Kherson region was quoted as saying, “How can they say voting is voluntary when they came with guns?”

We see Russian officials going door to door to deliver ballots, peering into the windows of homes, and knocking on the doors of apartments where nobody answers their call. We see reports of soldiers and poll workers approaching pedestrians on sidewalks and directing them to vote regardless of whether they have identification documents or appear on the voter rolls. Mobile armed groups such as these have also been visiting schools, hospitals, and other workplaces to round up “voters.” Is it any surprise we also see reports of residents hiding in or fleeing their homes, terrified that voting against Russia’s attempted annexation would lead to their being abducted, or much worse? These examples, and the many others, belie the underlying depravity and true intent behind Russia’s actions.

We know President Putin wants to use these sham referenda and their pre-ordained outcomes to try to solidify his weakening grasp on Ukraine’s sovereign territory. Why else would he pursue this fraud in regions with less than half of their pre-war populations, or even in Zaporizhzhya and Kherson where Russia controls less than half of the territory and continues its shelling, hitting civilian areas and causing large scale death and destruction? In an even more perverse reflection of this reality, there are public reports of Russia prohibiting all men between the ages of 18 and 35 in Zaporizhzhya and Kherson from traveling – likely in a repugnant attempt to conscript Ukrainian citizens to fight against their own country against their will. We have seen the reactions from these brave patriots still living under the brutal authority of Russia’s armed forces and proxies in these areas.

These phony referenda are egregious violations of Ukraine’s sovereignty. The United States will never accept these illegal referenda as anything other than Moscow’s true intention: to shred the international order that has been instrumental in building peace, stability, and prosperity in Europe — and to do so at the whim of one man, Vladimir Putin. As President Biden said at the UN General Assembly last week, “This war is about extinguishing Ukraine’s right to exist as a state, plain and simple … Whoever you are, wherever you live, whatever you believe, that should make your blood run cold…. We will stand in solidarity against Russian aggression. Period.”

Rather than Putin’s retrograde vision for the world in which he and he alone determines the fate of other countries, the United States chooses freedom and sovereignty. We are not cowed by the Kremlin’s bluster or its completely irresponsible and amoral nuclear threats. We will not waver in our commitment to providing Ukraine with exactly what it needs to defend itself, which it is doing admirably. We must – and will – protect the international order in which no country can redraw the borders of another by force. And we strongly repudiate the Kremlin’s flimsy effort to justify the unjustifiable with its attempt to annex the sovereign territory of Ukraine through fraudulent referenda. We will never recognize this affront to Ukraine’s sovereignty and territorial integrity, and we will remain clear and firm in our support for Ukraine.