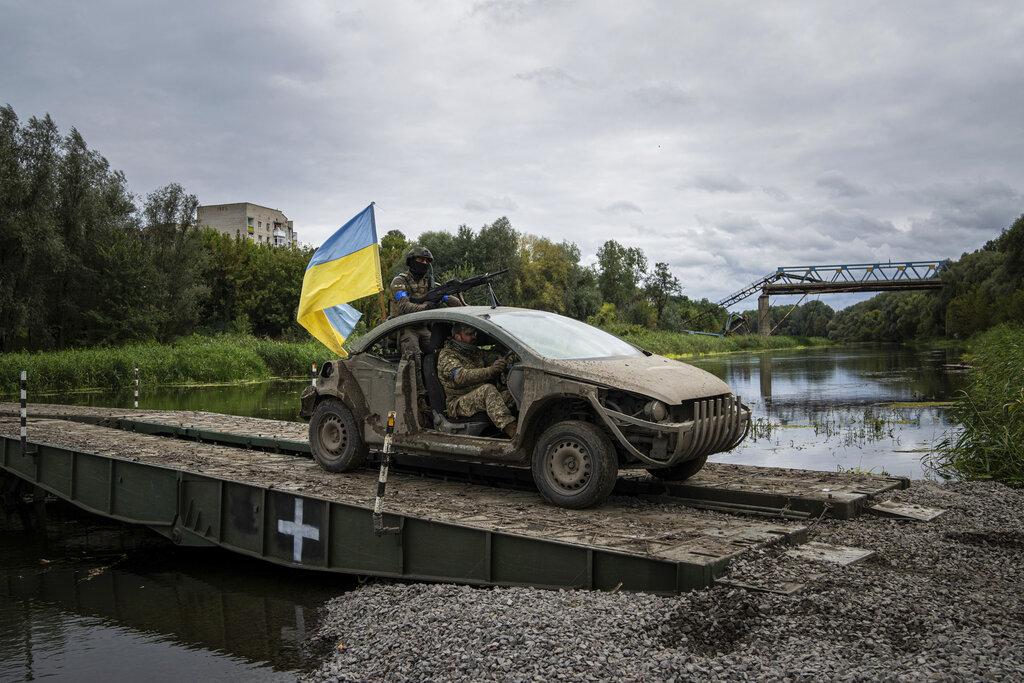 Ukrainian paratroopers drive with a Ukrainian flag on a pontoon bridge across Siverskiy-Donets river in the recently liberated town of Izium, Ukraine. (AP Photo/Evgeniy Maloletka)

The Russian Federation’s Ongoing Aggression Against Ukraine, Including Illegal Attempts to Legalize the Occupation of Eastern Ukraine

to the Permanent Council, Vienna
October 6, 2022

Thank you, Ms. Zhuk, for addressing this Permanent Council on behalf of the people of Zaporizhzhya and the Zaporizhzhya Regional Council.

I will start with expressing my condolences for the loss of life and of loved ones in Zaporizhzhya as a result of the murderous attacks by the forces of the Russian Federation. What we have seen over the course of the last couple of days in Zaporizhzhya is truly appalling as Russian forces have indiscriminately hit civilian convoys, as you described, high-rise apartment buildings, rehabilitation centers for children, schools, and other civilian infrastructure.  What sort of animals could conduct this savagery and this brutality.  I must tell you it is nauseating for me to sit in this Council with the propagandists of war criminals.

Over the last week, the Russian Federation has shown the world that its propaganda is built on the flimsiest of foundations as it continues to hemorrhage legitimacy at home and on the international stage.  The Kremlin’s efforts to hurriedly organize fake votes across Ukraine are laughable stunts that smack of desperation, particularly as hundreds of thousands of Russian citizens desperately flee the country ahead of forced mobilization for a war they do not want to fight.  This desperate gambit will not work.  Ukraine’s liberation of Lyman last Saturday and its advance farther east give the lie to Putin’s sham referenda, which are nothing but etchings of sand waiting for the tide to come in.

The Kremlin’s sham referenda and purported annexations, starting with Crimea, were a futile effort to mask a neo-imperialist land grab and a murderous effort to suppress Ukrainian and Crimean Tatar identity.  The results were clearly concocted in Moscow and forced at gunpoint, and do not reflect the will of the people of Ukraine, as we just heard from a representative of the Ukrainian people.  This propaganda stunt is illegitimate and violates international law.  The United States does not, and will never, recognize the legitimacy or outcome of these Potemkin referenda or Russia’s purported annexation of Ukrainian territory.  This includes yesterday’s outrageous announcement that the Kremlin is seizing “operational control” of the Zaporizhzhya nuclear power plant, which jeopardizes basic standards of nuclear safety and is deeply irresponsible.

It’s important to remember the violence of Russia’s forces had already caused many who live in these areas to leave their homes in search of safety.  Russia’s forces have also carried out its systematic “filtration” operations in these areas, resulting in imprisonments, executions, and further population displacements.  This drastically reduced population was then compelled by omnipresent armed guards and the Kremlin’s political commissars to participate in a clearly sham “elections.”  Mobile armed groups wearing balaclavas were reported visiting schools, hospitals, and other workplaces to “round up voters.”  Even according to Russia’s state-owned TASS, the planning process was so rushed there wasn’t time to set up more organized voting infrastructure.  Tina, one of the Ukrainian residents of this region, who was visiting relatives in Beryslav near Kherson, decried the forced voting, saying “we are against these occupiers, but we do not have a right to say so — we cannot refuse.”  Elena Kharkovska, who lives in newly liberated Lyman, only found out about Putin’s purported annexations after Ukraine’s troops freed the city.  Elena’s reaction is telling.  She said, “it’s funny to me because it recalls a saying: ‘Without me, they married me.’”

While Russia scrambled to cook up ersatz plebiscites in Ukraine, we saw real expressions of popular will in Russia.  Tens of thousands of Russian citizens voted with their feet, fleeing the country, fearful of being caught up in Putin’s draft.  Officials in Kazakhstan said 200,000 Russian citizens have crossed into the country since Putin announced his draft.  Georgia’s interior ministry said 100,000 had entered its territory.  The EU announced 66,000 Russian citizens had entered the bloc over the past week, 30 percent more than the week before.  Tens of thousands more have left via other countries, including Mongolia.  One man spent 20 hours driving from Tver to cross the border to Kazakhstan.  He said he’s “preparing myself for a hard time. I’m preparing myself that I won’t know where to sleep, what I’m going to eat.”  He’s willing to go through this hardship because “there is a risk that later you will simply find yourself in a cage.”

Men like this have good reason to fear that being dragooned into Russia’s military will cause them extreme hardship and suffering.  They know what to expect if they are forced to go head-to-head with Ukraine’s armed forces.  They know this because they have reportedly heard directly from Russia’s soldiers fighting and dying in Ukraine.  While talking to his girlfriend from the trenches, Sergey, a Russian conscript, said the Kremlin “just wants to fool people on TV, like ‘everything is alright; there’s no war, just a special operation.’  But in reality, it’s an actual [expletive] war.”  “Frankly speaking, nobody understands why we have to fight this war,” he said.  Separately, another conscript, Aleksey told his partner “I didn’t know this was going to happen.  They said we were going for training.  These bastards didn’t tell us a thing.”

Russia’s purported annexation will also cause further economic hardship for Russia’s people, including its soldiers.  There is reportedly already growing dissatisfaction in Russia’s military regarding the possible cancellation of allowance payments for soldiers for serving in combat missions.  Because of the war, living standards are increasingly being supported by social spending.  This will be difficult, if not impossible, for the Kremlin to sustain with the increased military expenditures Putin’s draft will require.

As Russia’s depravity in Ukraine deepens, so does our determination to support Ukraine’s unity, sovereignty, independence, and territorial integrity.  In response to the Kremlin’s actions last week to further violate Ukraine’s sovereignty, the United States imposed swift and severe costs on Russia.  These actions will further weaken the Kremlin’s already degraded military industrial complex and undermine its ability to wage its illegal war.  This included the U.S. designation of Elvira Nabiullina, Governor of the Central Bank of the Russian Federation (CBR), Olga Skorobogatova, the First Deputy Governor of the CBR, and Aleksandr Novak, a Russian Deputy Prime Minister.  All three of these Putin cronies have personally enriched themselves at the expense of the citizens of Russia, while facilitating Putin’s war in Ukraine.  The United States is also taking steps to impose visa restrictions on an additional 910 individuals, including members of the Russian Federation’s military, Belarusian military officials, and the Kremlin’s proxies acting in Ukraine.  Let me be very clear.  It does not matter how powerful or connected you think you are.  We will hold to account individuals, entities, or countries that provide political or economic support for Russia’s illegal attempts to change the status of Ukrainian territory.   \