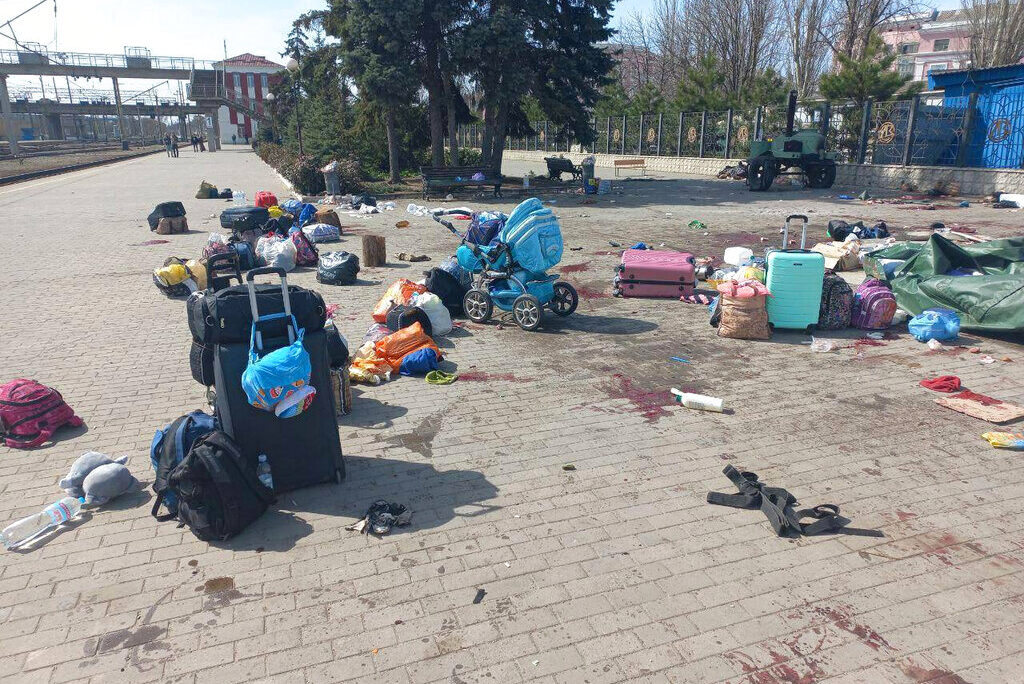 The Russian Federation’s Ongoing Aggression Against Ukraine: the Attack in Kramatorsk of April 8 2022

For the second time in less than a week, this Council is convening in a special session in response to horrifying atrocities carried out by the Russian Federation in Ukraine – this time, in response to Russia’s barbaric missile strike on Kramatorsk’s railway station on April 8 that killed over 50 innocent civilians and injured many more.

On the morning of Russia’s missile strike, Kramatorsk’s station stood teeming with thousands of terrified Ukrainian civilians fleeing their homes in advance of a possible Russian assault.

Colleagues, please try to envision this scene: a mass of anxious civilians in the process of leaving behind their entire lives, their homes and cities in a desperate attempt to avoid the horrific fates suffered by their fellow citizens at the hands of Russian invaders in Bucha, Irpin, and other towns and cities across Ukraine.  Hundreds of families huddled together, scared and vulnerable, waiting for the arrival of trains to deliver them to a safer place.

Then, at approximately 10:30 that morning, a terrible whistle rang out at Kramatorsk’s railway station as two Russian missiles followed their arced trajectory in the sky, bearing down without warning on these huddled masses of people.  The missiles descended on the station at the very moment authorities were documenting the mass civilian killings by Russian forces around Kyiv. They honed in on the train station at the very moment Russian forces were loading bodies in mobile crematoria in Mariupol and shelling towns across Kharkiv and Luhansk and Donetsk.  A moment later these missiles exploded.

Initially, Russia took responsibility for this attack, proudly announcing its “success.” But it only lasted a fleeting moment. When the scope and scale of human devastation became public, Russia decided to “unannounce” its responsibility.  The United States assessment is that this was a Russian strike with short-range ballistic missiles.

Mr. Chair, words fail to convey the scenes of carnage in Kramatorsk as chunks of hot metal ripped apart the bodies of these unarmed civilians, leaving them splayed on the ground, motionless, surrounded by their scattered belongings.  A woman in one video is heard screaming, “There are so many corpses, there are children, there are just children!”

Minutes after the attack, reporters on the scene inspected the remains of one of the missiles.  On it were written the words “For the Children” in Russian.  Ukrainian authorities report that at least five of those killed were children.  One badly injured child was brought to Kramatorsk hospital, he died after surgery; another child’s burnt body was discovered in the wreckage of a destroyed car.  A surgeon at the hospital listed off the injuries of the victims: “amputations, torn limbs, torn feet, stomach wounds and brain injuries.”

Mr. Chair, the Russian Federation’s attacks on civilians continues unabated.  Civilians are killed when they stay in their homes, and they are killed when they try to leave.  The day before Russia’s attack on Kramatorsk, Russian forces launched 118 airstrikes on Mariupol, where civilian evacuations have failed numerous times due to Russia’s firing.  Russian forces continue to bomb and shell residential areas in Kharkiv, whose mayor, Ihor Terekhov, reports that 1,440 out of 8,000 single-story houses in the city have been destroyed.  The mayor has described horrifying examples of barbaric treatment of civilians by Russian forces in small towns and villages around Kharkiv, including rape and the cutting off of male genitalia.  In the Luhansk region, Ukrainian authorities report that not a single medical facility – not a single one – has escaped damage from Russia’s attacks.

Mr. Chair, President Zelenskyy described the attack in Kramatorsk best, saying, “This is an evil that has no limits. And if it is not punished, it will never stop.”

Let there be no doubt that Russia will be held accountable for the Kramatorsk missile strike, the civilian deaths in Bucha, and the continuing destruction of Mariupol and Kharkiv.  We have already said that we assess that members of Russian armed forces have committed war crimes in Ukraine.  The United States is committed to pursuing accountability for those responsible for such crimes.

Later today, I suspect we will hear the same fantastical denials from the Russian representative as he seeks to gloss over yet another atrocity.  So far, Russia has stuck to the narrative that it no longer uses the Tochka-U missile that was deployed in the attack.  But numerous photos exist of Tochka-U missiles deployed by Russian forces, yes, Russian forces, to Ukraine, with their insignia of shame scrawled on the side.  As we all know, facts have never been an impediment to the Russian representative, whose lies in this Council enable his regime’s prosecution of a brutal war. No number of facts will stop my Russian colleague from pointing the finger of blame elsewhere – anywhere but at his own government.

Mr. Chair, in addition to providing Ukraine with the largest amount of security assistance of any country in the world to help Ukrainians defend themselves against this vicious attack, the United States is also supporting a range of accountability mechanisms in Ukraine, including investigations by Ukraine’s national authorities, international investigative mechanisms, and the important work of human rights documenters.

Right now, at the request of the Prosecutor General of Ukraine, the United States is supporting a multi-national team of international prosecutors and other war crimes experts deployed to the region.  This interdisciplinary team, which includes American experts, is directly supporting the efforts of Ukraine’s Prosecutor General’s War Crimes Units to collect, preserve, and analyze evidence of atrocities with a view toward pursuing criminal accountability processes.  And, of course, we have the Moscow Mechanism invoked here at the OSCE by 45 participating States to investigate possible war crimes and violations of international humanitarian and human rights law resulting from Russia’s vicious war of choice.  We are committed to using every tool available to ensure those responsible are held accountable for atrocities.