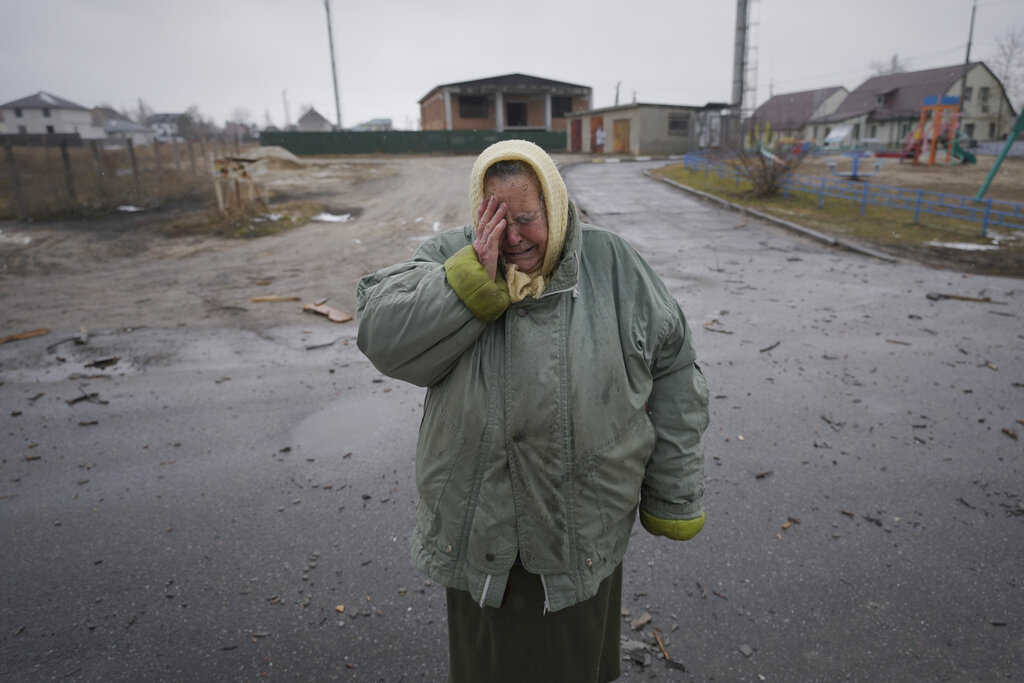 A woman cries outside houses damaged by a Russian airstrike, according to locals, in Gorenka, outside the capital Kyiv, Ukraine (AP Photo/Vadim Ghirda)

I would like to start by joining you and my other colleagues in expressing my deepest condolences to the family of Maryna Fenina, a local staff member of the SMM, who was killed by Russian shelling in Kharkiv. She is the second SMM member to have been killed by Russian violence, after Joseph Stone was killed in 2017. I would like to thank Director Schüepp, Ambassador Kinnunen, and especially Mayor Sukhomlyn and thank him for his powerful message.

This is the eighth day of Russia’s premeditated, unprovoked war on Ukraine. After menacing and bullying the West for months and after rejecting countless diplomatic overtures, including those made here at the OSCE, the Russian Federation made the fateful and tragic choice to try to subjugate an independent nation. To bend it to its will through brute force.

But Russia’s leadership has horribly miscalculated. The courage and determination of Ukrainians to live in freedom, to defend their homeland against a foreign invader, has only grown as the Russian offensive has intensified and become more bloody and barbaric. Like the Ukrainian marine, Vitaliy Skakun, who sacrificed his life blowing up a bridge to slow down approaching Russian forces. Like the thirteen Ukrainian border guards on Snake Island who refused a Russian demand to surrender. Like the civilians standing, kneeling, and lying down in front of Russia’s tanks, singing their national anthem.

There’s no equivocation or middle ground possible in this war. There is only evil, and resistance. We should heed the words of the Mayor of Zhytomir.  Humanitarian support is necessary, but so are the weapons Ukrainians need to defend themselves, their families, their cities, and their homeland.

Colleagues, we all have a duty to bear witness to the violence, suffering, death, and destruction that this war of choice has wrought. We see that Russia is increasingly killing civilians: women, children, and the elderly are dying in Russia’s bloody barrage. The Ukrainian National Children’s Specialized Hospital Okhmatdyt, for example, was hit February 25 by a Russian missile strike in Kyiv. A six-year-old girl wounded by Russian shelling of a supermarket in Mariupol Sunday died shortly after arriving at a hospital, her bloody pajama pants decorated with cartoon unicorns. A home supply store in Chernihiv blown to bits. Even the Babyn Yar Holocaust Memorial was hit by Russia’s missiles.

So many lives lost and so much tragic suffering in just eight days. And for what? A sphere of influence? What kind of influence is that?

I must also issue a warning to everyone in this Council. We have been talking about this war for several months.  We have credible information that indicates Russian forces are creating lists of identified Ukrainians to be killed or sent to camps following a military occupation. We also have credible information that occupying Russian forces will likely use lethal measures to disperse protests or otherwise counter perceived resistance. Given what we have seen in past Russian operations, we expect that the Russian Federation will try to force the population to cooperate through intimidation, abuse, and repression—including through targeted killings, kidnappings, detentions, and physical abuse.

That is why we must urgently create a mechanism to document all abuses of human rights, all violations of international humanitarian law, and any and all potential war crimes and crimes against humanity.  The United States strongly supports using all OSCE instruments at our disposal to record the relevant facts and to begin the process of holding individuals accountable.

On the humanitarian side, we must also act urgently. Food products and medical supplies are in short supply across the country. We must all demand a cessation of hostilities to allow for badly needed humanitarian relief to reach the affected population centers. The United States has over the last week donated $54 million in humanitarian assistance to Ukraine. We have seen many others step up. Now we need to get those supplies to those in need, before it is too late.

Finally, Mr. Chair, I want to point out that the blanket term “Russia” applies first and foremost to the Russian government and its representatives, but not to all Russians. As the Russian dissident and opposition politician, and also my friend, Vladimir Kara-Murza wrote recently, “It’s not just the West that opposes Putin’s war on Ukraine. A lot of Russians do, too.” In fact, over 7,000 of them have been detained for protesting the war in less than a week. In the coming days, we will doubtless hear more such stories of bravery and defiance. Andrei Kozyrev, Russia’s former foreign minister, has for example called on Russian diplomats to resign. To act as “professionals, not as cheap propagandists.” Many others have spoken out as well, and no matter how many social media platforms and media outlets the Russian government shuts down, these voices will be heard.

Mr. Chair, unless and until President Putin turns back from his cruel aggression and engages in good faith diplomacy and dialogue, he will bring further isolation, hardship and ruin onto his country. Let us hope this war of conquest is aborted immediately and sanity is restored to our international relations. We will do everything possible to support Ukraine in the meantime. We are all Ukraine.

I ask that this statement be appended to the Journal of the Day.