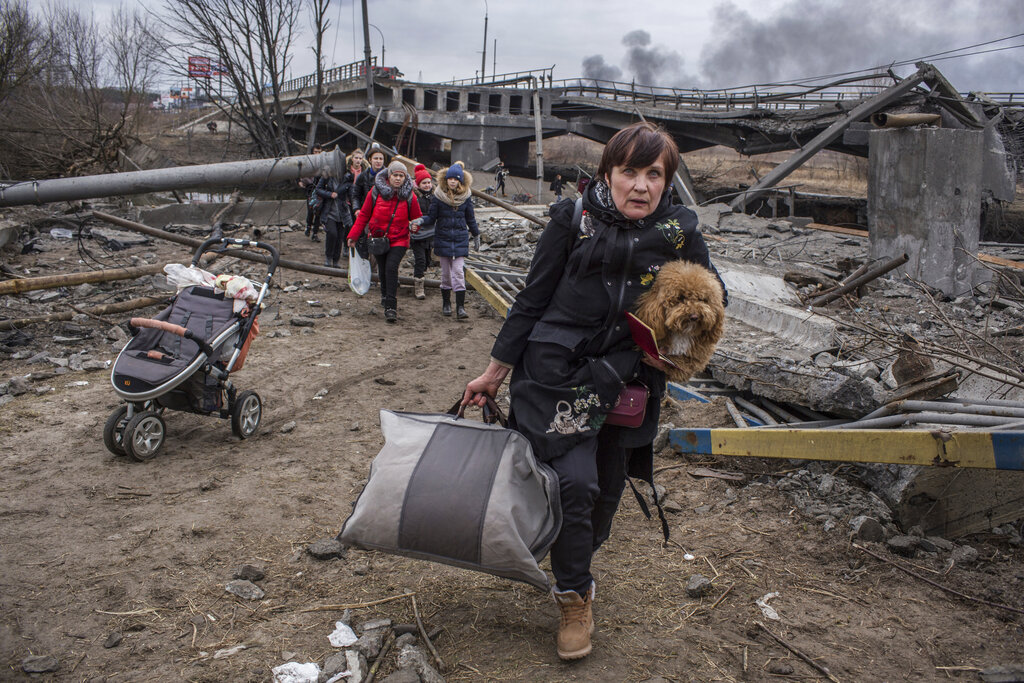 Today is the 12th day of President Putin’s unprovoked war on Ukraine. The brutality of this war is both revolting and heartbreaking. Children have been killed, grandparents driven from their homes, families forced to flee their country in the face of relentless strikes on civilian infrastructure. UNHCR announced on March 6 that the number of refugees is over 1.5 million and growing, and as of March 5 the number of IDPs was also approaching 1.5 million.

The depravity of it all is mind-blowing. On Saturday and Sunday, Russia agreed to open a humanitarian corridor out of Volnovakha and Mariupol but then bombed the egress road just as civilians were in the process of fleeing. It is pure evil..   Today, the Russian Federation has proposed – and this is the height of cynicism – that Ukrainians flee Russian aggression by going to Russia and Belarus..

Last Thursday a record total of 45 participating states launched the Moscow Mechanism to document and gather evidence of possible human rights abuses or violations, breaches of international humanitarian law, and possible war crimes and crimes against humanity committed by Russian forces, with the support of Belarus, on the territory of Ukraine.  This mechanism will meticulously establish the facts and create a written report so that cases can be brought in other international institutions – including the International Criminal Court and the International Court of Justice – and so individuals at all levels are held to account. The UN Human Rights Council has also launched a Commission of Inquiry to pursue similar aims, and we will ensure that there is cooperation and complementarity between these accountability mechanisms.

Colleagues, we all have a moral responsibility to act now. Among the many early warning signs of mass atrocities is the use of rhetoric denying a nation’s right to exist. Humanity has witnessed this sort of rhetoric before, and shockingly we are seeing it again today. We have also witnessed the Russian Federation’s war propagandists – including some who sit in this very Council – twisting words into grotesque doublespeak. Again, we have seen this before. I ask Russia’s representative whether he thinks the children killed by Russia’s missiles are “terrorists”? Is the Jewish President of Ukraine a “Nazi”? Explain how Russia’s artillery strikes on civilian apartment buildings in Kharkiv, Kherson, and Kyiv are “liberating”? I ask him to explain the destruction of basic infrastructure plunging embattled cities like Mariupol into darkness, as civilian residents cower in makeshift bomb shelters without food or water. Explain turning Europe’s largest nuclear power plant into an active warzone. The Russian government’s actions were extraordinarily reckless and dangerous. They could have posed a profound threat to the safety of civilians in the region and beyond. Russia needs to stop this war, withdraw its forces immediately, and return to the diplomatic path.

Early on Sunday the Russian government suddenly claimed, without providing a single shred of evidence, that the Ukrainian government had plans to build a “dirty bomb” and that was the pretext for the Russian attacks on Ukraine’s nuclear power plants. Really? Not one piece of evidence has been provided, and Russia thinks the world should believe them, because “they said so?” This ridiculous claim is merely the latest lie peddled by the Kremlin to try to justify its indefensible actions in Ukraine.  The most authoritative international source of credible information on Ukraine’s nuclear program, the IAEA, has repeatedly assured us it has uncovered no indication of any proliferation concern from Ukraine.

There are no credible explanations and no justifications for these actions. There is no “special military operation,” only a naked war of aggression.

Mr. Chair, the Russian Federation representative’s incendiary rhetoric, seeking to justify the unjustifiable, has no place in this Council. I’ll repeat what I said last week: not one single solitary person in this chamber believes a word of his distorted rhetoric. I suspect his real reason for speaking here is not to try to convince anyone in this Council – because he can’t – but rather to feed lies back into Russia through the country’s network of state-controlled media.  This Orwellian feedback loop spreads toxic lies by recycling the words of Kremlin propagandists, offering the citizens of Russia a steady stream of falsehoods and disinformation.

The great Czech dissident and late president Vaclav Havel – a personal hero of mine, by the way – once wrote that: “If the main pillar of the system is living a lie, then it is not surprising that the fundamental threat to it is living the truth. This is why [the truth] must be suppressed more severely than anything else.” And indeed, this is precisely what we are witnessing. Russia’s censorship agency has shuttered independent Russian media outlets, blocked social media, and restricted access to international news outlets. Vaunted independent voices like Ekho Moskvy and TV Dozhd, and flagship international media like the BBC, and social media platforms like Facebook and Twitter are now shut out of Russia’s information ecosystem. Under a new law, ordinary Russians who contradict the Kremlin’s fictitious narrative about the invasion could face up to 15 years in prison.  The war on Ukraine is also a war on truth.

Dear colleagues, as Foreign Minister Kuleba said recently: “Ukraine will win this war anyway, because this is the people’s war for their land…The question is the price.” He is right. The people of Ukraine will not be subjugated by a tyrannical regime. They will defend their homes, their neighbors, their cities, and their country against foreign tyranny. The resolve of the Western community has also never been stronger. We will continue to stand with Ukraine, accelerating our security and humanitarian assistance, halting commerce with Russia, and degrading Russia’s military-industrial complex for years to come. We will gird ourselves for the long haul even as we act with urgency now.

Mr. Chair, the term “free world” has echoes of a bygone era, but make no mistake, Ukrainians are fighting for the free world, not just theirs, but also ours.

I ask that this statement be appended to the Journal of the Day.