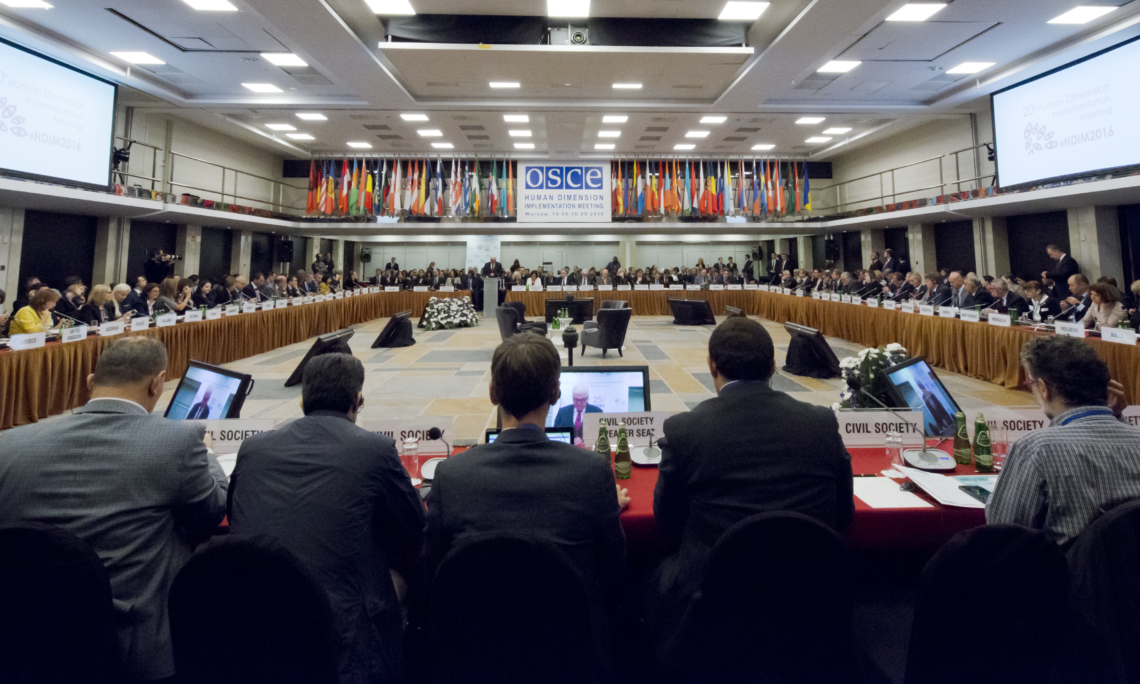 All human beings are born equal in rights and dignity. Everyone should be protected, not threatened. But across the OSCE region, we continue to see an alarming rise in intolerance. Despite efforts by some states to address intolerance and discrimination, many participating States do not adequately implement their tolerance and non-discrimination commitments.

At a mosque in Baltimore, Maryland, President Obama said “we’re one American family. And when any part of our family starts to feel separate or second-class or targeted, it tears at the very fabric of our nation.” Our multi-racial, multi-ethnic, and multi-cultural democracy has Constitutional protections against discrimination. But as the head of our Justice Department’s Civil Rights Division recently acknowledged, “we still see a real gap between what the law guarantees on one hand, and what people experience on the other. And we see how this gap continues to harm some of the most vulnerable among us, including…communities of color, LGBTI individuals and diverse religious communities. [Our Government] work[s]… to close this gap by enforcing the law to ensure that all people… can feel safe, supported, and free. Closing this gap means. . . vigorously enforcing the Voting Rights Act… defending the rights of LGBTI men and women… working to reform local police departments… [and] protecting diverse religious communities . . . from a backlash of hate, violence, discrimination, and harassment…”

Good data is essential to developing good policy. Only one quarter of participating States provide data for ODIHR’s hate crimes website. In many cases, the data provided does not meet ODIHR specifications, making it difficult to accurately track hate crimes and prosecutions. Absent disaggregated information on specific motives and impacted populations, we cannot tell whether policy efforts are helping, hurting, or having no effect whatsoever. Only about one quarter of participating States report data on crimes linked to racism and xenophobia, even though findings from the European Network Against Racism detail high rates of such crimes against people of African descent and Black Europeans. Too few participating States report hate crimes data on persons with disabilities, even though they are often targets of hate crimes, and relative to their non-disabled peers, are at increased risk of violence and abuse. Such risks are even greater for persons with disabilities living in segregated institutional settings.

OSCE participating States can make efforts to combat hate crimes more effective by: disaggregating data; using common criteria for identifying hate crimes; and addressing barriers that impede the ability of survivors to report the crimes committed against them.

We commend the Chairmanship’s initiative “Turning Words into Actions” which helps: increase security for Jewish communities; counter anti-Semitism through education; and promote tolerance through civil society coalitions. The successful June 16-17 ODIHR event “A Europe of Diasporas” in the European Parliament underscored the importance of building civil society coalitions in response to anti-Semitism, discrimination, and intolerance. A side event on Thursday will explore ways to recognize and address contemporary anti-Semitism.

Stigmatizing all Muslims for the terrible acts of a few is unacceptable. We applaud extraordinary interfaith efforts that bring together Christian, Muslim, Jewish, and other communities. ODIHR’s “Muslims in the Media” project will assist in countering stereotypes.

Despite growing international efforts to protect the rights of lesbian, gay, bisexual, transgender, and intersex persons throughout the OSCE region, LGBTI persons are often subjected to discriminatory laws and practices and violent hate crimes. Several countries have enacted or are considering new laws that discriminate against and undermine the safety of LGBTI individuals.

Government officials and public figures should not pander to and promote intolerance. They should condemn and combat it.

Xenophobic and exclusionary political platforms increase prejudice and violence towards racial, ethnic, and religious minorities as well as migrants and refugees. Hungary stands out for its repeated, stigmatizing, anti-migrant rhetoric, and for conflating migration and terrorism. A recent Hungarian government award to a virulently racist columnist reinforces this unwelcome message. Hungary and others have also rehabilitated anti-Semites and vicious nationalists.

I look forward to the special event at the POLIN museum here in Warsaw. It illuminates 1000 years of Jewish life in Poland, including the dark years of the Holocaust. This national treasure, like the Warsaw Uprising Museum, records a precious part of Poland’s history and helps establish a factual basis for scholarship and discussion, as does our new Museum on African American History and Culture in Washington, DC.

We oppose laws that criminalize characterizations of history. The characterization that generated a proposed law in Poland concerning death camps is factually wrong. But that is not a good reason to criminalize speech. Russia should repeal its law criminalizing “wittingly spreading false information about the activity of the USSR during the years of World War Two.” Open conversation, scholarship and education are more effective approaches.

Nor is combatting demagoguery and hate-mongering a job for the courts. Political leaders bear a particular responsibility to condemn expressions of intolerance and efforts to fan the flames of hate. Governments must enforce laws against discrimination, violence and other manifestations of these evil doctrines, but political and religious leaders should not ask courts to become the policemen of thought or expression.

Governments must combat discrimination in all its ugly forms. We ask participating States to join us in increasing funding for ODIHR’s tolerance initiatives through the unified budget and extra-budgetary projects.

The OSCE Parliamentary Assembly’s recent adoption of the resolution “A Call for OSCE Action to Address Violence and Discrimination,” urges participating States to adopt an OSCE Anti-Discrimination Plan. The Plan envisions capacity-building measures to help political leaders and other prominent figures counter intolerance, including annual indicators to assess implementation.

We welcome the Chairman’s plan to hold a conference in Berlin in October on Promoting Tolerance and Fighting Discrimination.

The OSCE must mobilize political will and resources to combat racism, xenophobia, injustice and hate crimes against members of marginalized communities throughout our region.