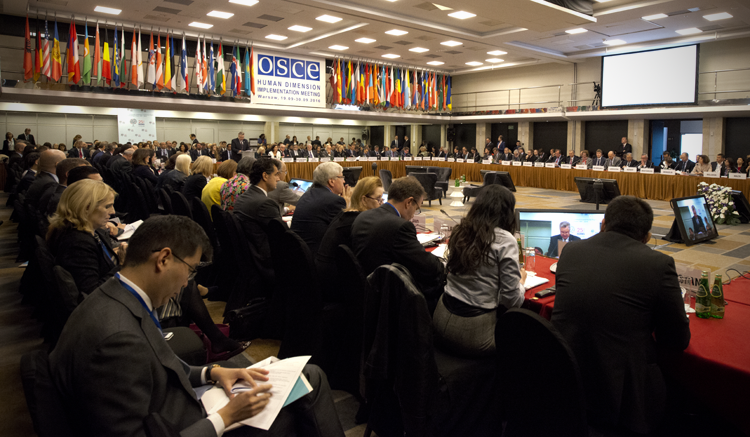 View from inside the opening session of the OSCE Human Dimension Implementation Meeting 2016, Sept. 19, 2016. (USOSCE/Colin Peters)

The United States offers its continued support in the effort to save lives and protect those who are particularly vulnerable to human trafficking, including migrants and refugees.

Europol has reported that known smuggling and human trafficking gangs are working together to exploit migrant vulnerabilities. This is particularly concerning given the influx last year of 90,000 unaccompanied minors who may be particularly vulnerable to human trafficking. Europol reports that at least 10,000 unaccompanied minors have gone missing. We must not let them slip through the cracks and into the hands of traffickers.

The State Department’s latest Trafficking in Persons Report revealed that, the OSCE region saw an 18% increase in prosecutions in 2015, and a 6% increase in convictions. This is good news for potential victims. However, the statistics also show that the overall number of victims identified decreased 7%. Effective identification of victims, whether citizens or migrants, remains a challenge for all of our governments. Trafficking victims may not realize that they are victims of a crime, and they are often threatened by their traffickers with deportation or retaliation. In this regard, we underline the importance of implementing effective measures vis-à-vis victims of trafficking, such as the pro-active screening by specially trained individuals, including among migrant flows, the provision of temporary and longer-term protection to stabilize the physical and emotional well-being of victims and decrease their vulnerability, and the facilitation of access to school, as well as work and residency permits.

We commend Lithuania and Georgia for increasing the anti-trafficking capacity of law enforcement through training police, prosecutors, and judges and Slovenia and Cyprus for increasing their convictions and victim identification processes. Unfortunately, Macedonia and Serbia lost ground this year, particularly in the effort to identify trafficking victims among migrants and to coordinate with NGOs on their care. In Turkmenistan and Uzbekistan, the governments mobilize forced adult labor for the cotton harvest. Uzbekistan has made commendable progress towards ending forced child labor in the cotton harvest. We applaud Turkmenistan’s passage of a new national action plan to combat trafficking in persons, and we urge the government to work with the International Labor Organization and other partners to decisively end forced labor in the cotton harvest. The UN TIP Protocol calls on all of our governments to treat human trafficking as a crime. Luxembourg and Poland are examples of governments that are making significant efforts to combat trafficking but have consistently issued short and suspended sentences for trafficking crimes. To be effective in deterring this horrible crime, we must all strive to consistently hold perpetrators criminally accountable.

Constituting another human cost to the unnecessary conflict Russia fomented against Ukraine, nearly two million people in Ukraine remain displaced. These individuals are vulnerable to exploitation. Even under these difficult circumstances, we strongly encourage Ukraine to fund and fully implement its 2016-2020 anti-human trafficking plan and ensure that traffickers are prosecuted and receive sentences commensurate with their crimes. We avail ourselves of the opportunity to commend Ambassador Jabussynova, the OSCE Special Representative and Coordinator for Combatting Trafficking in Human Beings, for her initiative to raise awareness within the SMM about human trafficking.

Russia itself has yet to draft a national strategy or assign roles and responsibilities to government agencies to remedy the trafficking within its borders. We were disappointed to see that Russia does not offer any funding for trafficking victims’ rehabilitation, and that its crackdown on civil society last year meant that even privately run shelters had to cease their care of victims. For the sake of Russian-citizen victims, as well as the Central Asian migrants and 20,000 North Korean laborers, we urge Russia’s increased attention within its own borders.

While it is unfortunate that Kosovo is not at the table to discuss this vital transnational issue, something we feel OSCE member states must address without delay, we note that Kosovo is implementing protocols on combatting trafficking in persons, including forced labor, with Albania and Montenegro, and is negotiating a similar agreement with Macedonia. We urge that Kosovo be included in a table-top simulation of regional anti-TIP practitioners that will take place in Italy in November.

Those who face economic marginalization, including Roma and other minorities, are highly vulnerable to trafficking. We welcome the education effort undertaken by Albania, including during their “Anti-Trafficking Month” activities, prosecution by Bosnia and Herzegovina of a trafficking ring whose victims were Romani women and girls, the robust collaboration of the government and civil society to address trafficking in Croatia, and repatriation assistance by Romania.

The German Chairmanship of the OSCE is to be commended for addressing the prevention of trafficking in human beings for labor exploitation in supply chains, with a focus on public procurement, at a special OSCE conference in Berlin earlier this month. We support these efforts and hope that participating States will join to signal our collective efforts in outcome documents for the Ministerial in Hamburg. We commend the United Kingdom for being the first country in the world to require large corporations operating in the country to publish the steps they are taking to eradicate trafficking from their supply chains.

For our part, the U.S. government, as the largest single purchaser of goods and services in the world, bears a responsibility to ensure American tax dollars do not contribute to human trafficking. In response to this, a U.S. federal regulation guiding public procurement went into force last year, implementing President Obama’s Executive Order 13627 Strengthening Protections Against Trafficking in Persons in Federal Contracts to address fraudulent recruitment in government contracting. For example, it prohibits contractors and subcontractors from engaging in fraudulent recruitment practices, charging recruitment fees, and destroying or confiscating identity or immigration documents, and it requires compliance plans for large overseas contracts.

We are also concerned about the commercial sexual exploitation of children by tourists and other travelers, which affects more than a dozen participating States. As the United States is one of the countries of origin for individuals engaging in such activity, we are leading an international cooperative alert system that will warn countries in advance about individuals who may be traveling for child sex tourism. Through this program, the United States uses sex offender registry information and passenger data to alert foreign law enforcement of a convicted child predator’s intent to travel. In Fiscal Year 2015, the United States made more than 2,100 notifications to more than 90 countries.

Finally, the United States appreciates the hard work of Ambassador Jarbussynova, and her country visit to the United States earlier this year. We will take her observations under serious advisement as well as share them with the U.S. Congress for follow-up action. No country can afford to rest on its past anti-trafficking successes. To win this fight against human trafficking, we must remain vigilant and visionary, committed to doing more next year than we did the last. We look forward to the discussion of effective practices participating States have identified to prosecute traffickers, protect trafficking victims, and prevent trafficking in persons.