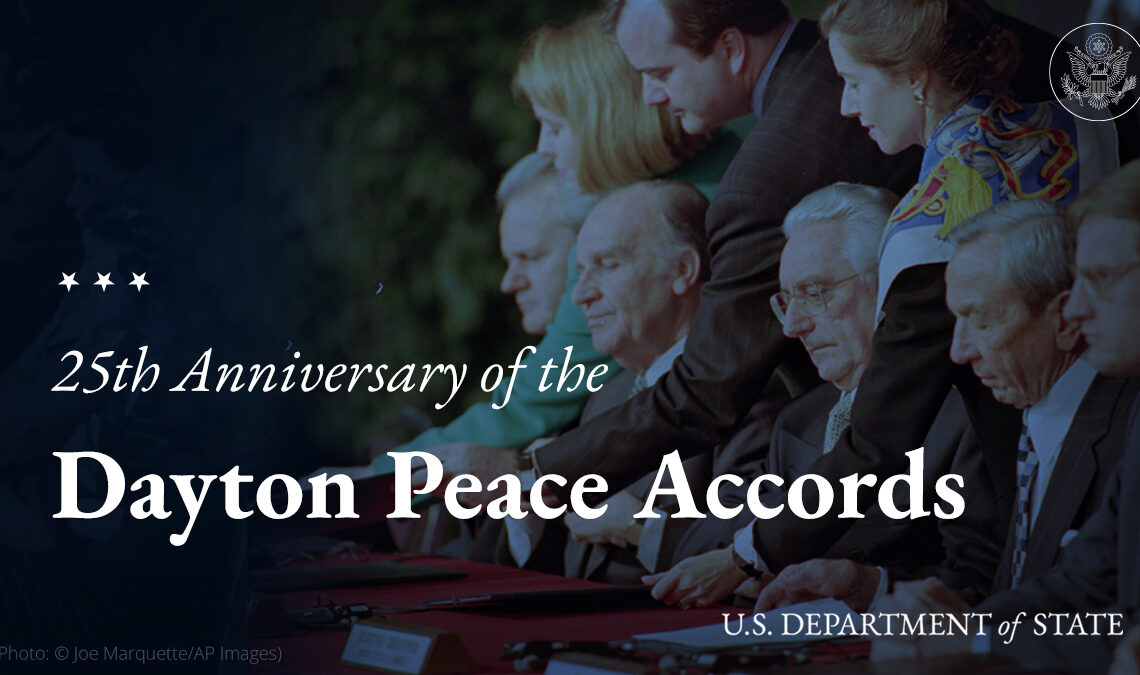 to the Permanent Council, Vienna
November 26, 2020

I want to acknowledge Mr. Lajcak.  I remember working with him when he was Chairperson in Office together with the Permanent Representative from Slovakia, for what I consider to be a very successful Chairman in Office term.  I remember meeting with him with Assistant Secretary of State Reeker and I am grateful for his comments here today with respect to the Dayton Accords.

The United States has been a strong partner and friend of Bosnia and Herzegovina for the past 25 years.  We have provided about two billion U.S. dollars in assistance since 1995 to support democratization, reconstruction, humanitarian needs, modernization of the defense sector, economic development, and education.  Our efforts  have continued through the coronavirus pandemic in the form of medical and disinfection supplies and an investment of more than four million U.S. dollars to support laboratory systems and the public health sector. I mention these finances not to be tiresome or tedious with respect to all of my fellow ambassadors, but simply to point out that this is the commitment of American taxpayers’ hard earned money, in order to stand by an ally and a friend, and someone whose confidence we have as we all go forward together to a brighter future for Europe.  We think it’s worth it, we think it is worth making that investment.

We are steadfast in our encouragement of Bosnia and Herzegovina to advance towards its Euro-Atlantic future.  But success is dependent upon advancements in rule of law, electoral reform, and improving human rights within Bosnia and Herzegovina.  The United States stands by you, and will continue to walk with you as you move forward on this path.  With more than 70% of Bosnians supporting integration into the European Union, we know that taking hard but necessary steps toward this goal is the will of the people of Bosnia and Herzegovina.

Across the three dimensions of the OSCE, the United States has supported the country’s recovery from war to peace and prosperity.  We have helped the Ministry of Defense purchase helicopters to assist civil authorities in dealing with natural disasters.  Additionally, our partnership has made it possible for the Armed Forces of Bosnia and Herzegovina to host the U.S. Army for bilateral military exercises in 2021.

On the economic front, the United States has helped Bosnia and Herzegovina grow its tourism industry.  We also helped the government conduct effective oversight of early exploration and development of the country’s nascent hydrocarbon sector.  As a result, Bosnia and Herzegovina will maximize revenues from oil and gas development and strengthen its environmental safeguards in oil exploration regions.

The United States is assisting Bosnia and Herzegovina in implementing its National Strategy against Trafficking in Persons.  As you know, this is a major priority for the United States this year.  We provide funding to train judges, prosecutors, and law enforcement personnel to assist and protect victims, as well as bring convictions against those who engage in this heinous crime.  The United States also empowers and promotes civil society as one of the most credible anti-corruption forces in the country, with a view to help prevent human trafficking and to provide victims and survivors with effective protection throughout the judicial system.

Since the initialing ceremony at Wright-Patterson Air Force Base near Dayton, Ohio, 25 years ago, the OSCE, the Office of the High Representative, NATO, and the EU have played crucial supporting roles in implementation of the Dayton Accords.  Just as it was a quarter century ago, our vision for Bosnia and Herzegovina remains today: an inclusive and stable democracy built on effective governance and accountable leaders who work together to ensure opportunities for everybody in the country.