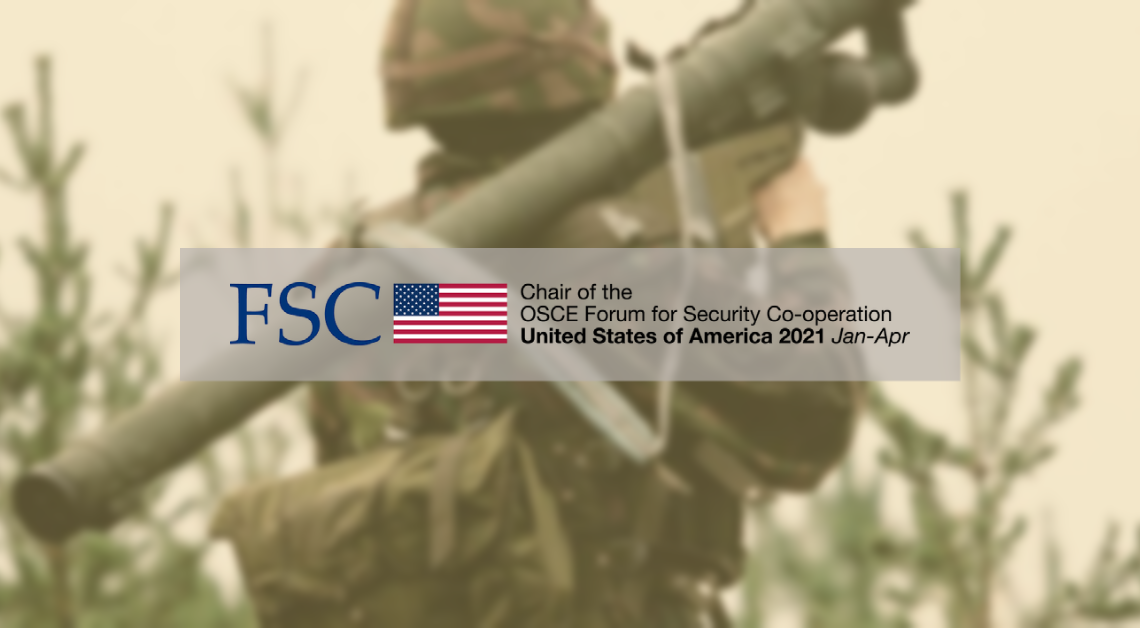 Security Dialogue on MANPADS, convened by the U.S. Chair of the OSCE Forum for Security Co-operation (FSC).

VIENNA, 17 February 2021 — Calls to reduce illicit and irresponsible Man-Portable Air Defense Systems (MANPADS) proliferation and use were echoed by OSCE participating States during a Security Dialogue on MANPADS, convened by the U.S. Chair of the OSCE Forum for Security Co-operation (FSC). This Security Dialogue sought to leverage expertise on the multi-dimensional threat of MANPADS, including discussion on non-proliferation of small arms and counterterrorism.

The Security Dialogue provided an overview of the impact of MANPADS proliferation on European and regional security. Panelists highlighted recent evidence of non-state armed groups fielding technologically advanced systems, in addition to widespread proliferation of earlier systems in the immediate OSCE area. These developments require a renewed focus on this threat. The OSCE region is home to several non-state groups in possession of MANPADS and has seen several of the most recent uses of MANPADS in conflict zones.

MANPADS, first developed in the 1960s to help armed forces defend against military air strikes, pose a serious threat to commercial and military aircraft around the world in the hands of terrorists, criminals, and other non-state actors. Since 1970, terrorists and other non-state actors have struck dozens of civil aircraft, including passenger airliners with these shoulder-fired missiles.

“This is not a theoretical threat,” explained Matthew Schroeder, Senior Researcher at Geneva-based Small Arms Survey. “Large fixed-wing aircraft have been lost to MANPADS attacks, and more could be lost in the future if we let up on our efforts to keep these weapons out of the hands of non-state actors.”

In her remarks, U.S. Interagency MANPADS Task Force Director Karen Chandler noted that “Successful MANPADS attacks have resulted in catastrophic loss of life. The 65 MANPADS attacks on civilian aircraft since 1973 have killed over 1,000 civilians. While 90% occur in conflict zones, the portability of these systems and proliferation to non-state actors is also a cause for concern for civilian aviation outside of conflict zones.” Though 2021 marks the 13th consecutive year without a MANPADS attack on a civilian airliner, Ms. Chandler warned that the United States sees “many reports that non-state actors are seeking to acquire and use MANPADS, and many of these groups have successfully deployed them against military targets,” urging states to maintain international efforts

Underscoring this urgency, Dr. Arnaud Borde of the French Civil Aviation Authority emphasized that “MANPADS are becoming more and more sophisticated and that engagement distances are getting longer. The missiles can reach a target at 25,000 feet” as newer systems arrive to the market. “MANPADS threats extend beyond traditional airport-centered security.” Dr. Borde discussed several mitigation strategies including intelligence gathering and analysis, regular assessment of potential targets, adapting flight procedures, and capacity building, stressing that these strategies exist and should be implemented by a wide range of stakeholders, from states to private aviation operators.