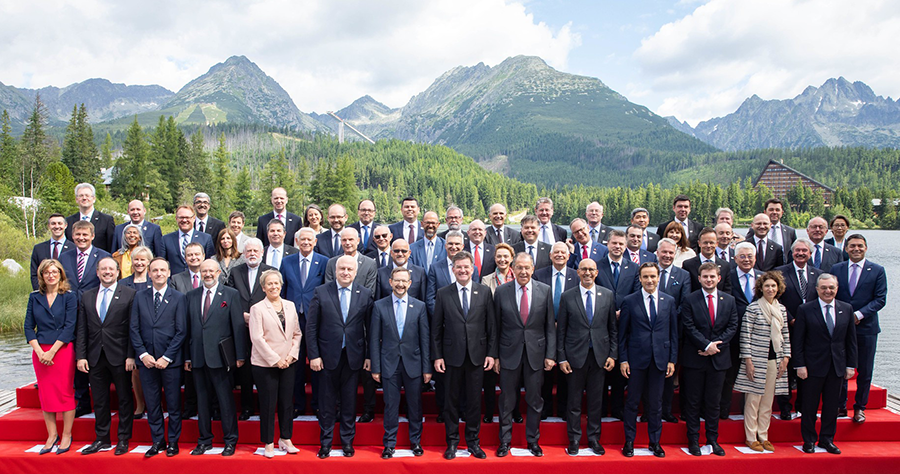 U.S. Pushes for Resolution of “Europe’s Worst Humanitarian Crisis in a Generation” during the OSCE Informal Ministerial in High Tatras, Slovakia

Acting U.S. Assistant Secretary of State for Europe and Eurasia Philip Reeker denounced the Russian invasion of eastern Ukraine and occupation of Crimea in his intervention at the Organization for Security and Cooperation in Europe (OSCE) Informal Ministerial meeting in the High Tatras region of Slovakia on July 9.  Reeker urged Russia to re-engage meaningfully in the Normandy Format and bilateral U.S.-Russian negotiations to facilitate a broader resolution of the conflict, which has created Europe’s worst humanitarian crisis in a generation. The Assistant Secretary’s statement was made in a room filled with foreign ministers and other high-ranking officials from the OSCE’s 57 participating States and rebutted Russian Foreign Minister Sergei Lavrov, who earlier had attempted to justify Russian aggression in the region.

At a subsequent session of the informal ministerial, newly credentialed U.S. Ambassador to the OSCE James S. Gilmore III reminded ministers, including Lavrov, that the Helsinki Accords of 1975 had been adopted to avoid military conflict in post-World War II Europe.

Ambassador Gilmore forcefully advocated U.S. interests in strengthening the flexibility and integrity of the organization.  The overwhelming majority of officials present echoed Gilmore’s remarks in highlighting Russia’s aggression in Ukraine as a fundamental stumbling block to our shared efforts in preventing conflict.

Ministerial attendees marked the OSCE’s progress in mitigating long-standing “protracted conflicts” in the OSCE area, citing the recent exchange of prisoners between Armenia and Azerbaijan under the auspices of the OSCE’s Minsk Group process as an example of the impact of the organization’s work.  They welcomed recent steps toward disengagement between Ukrainian military and Russia-led forces near the crossing point of Stanytsia Luhanska in eastern Ukraine.

“The United States remains firmly committed to the OSCE,” Ambassador Gilmore added during a working lunch with ministers July 9.  “We are the strongest backer of this organization, both in terms of budgetary support and the recruitment and placement of many highly qualified Americans working in nearly every OSCE field mission, independent institution, and its headquarters in Vienna.”  The Ambassador further pushed participating States to reiterate their continued commitment to the principles of the Helsinki Final Act. A former governor of the U.S. state of Virginia, Ambassador Gilmore noted that “Human rights is part of the very foundation of the United States, as evidenced in the Declaration of Independence, which was largely written by a fellow Virginian, Thomas Jefferson, and whose content influenced the drafters of the Helsinki Final Act,” he offered.

Ambassador Gilmore subsequently highlighted a robust week of American participation in multilateral fora, having himself joined the largest-ever delegation ever of U.S. legislators to the OSCE’s July 4-8 Parliamentary Assembly meeting in Luxembourg immediately before the Informal Ministerial.