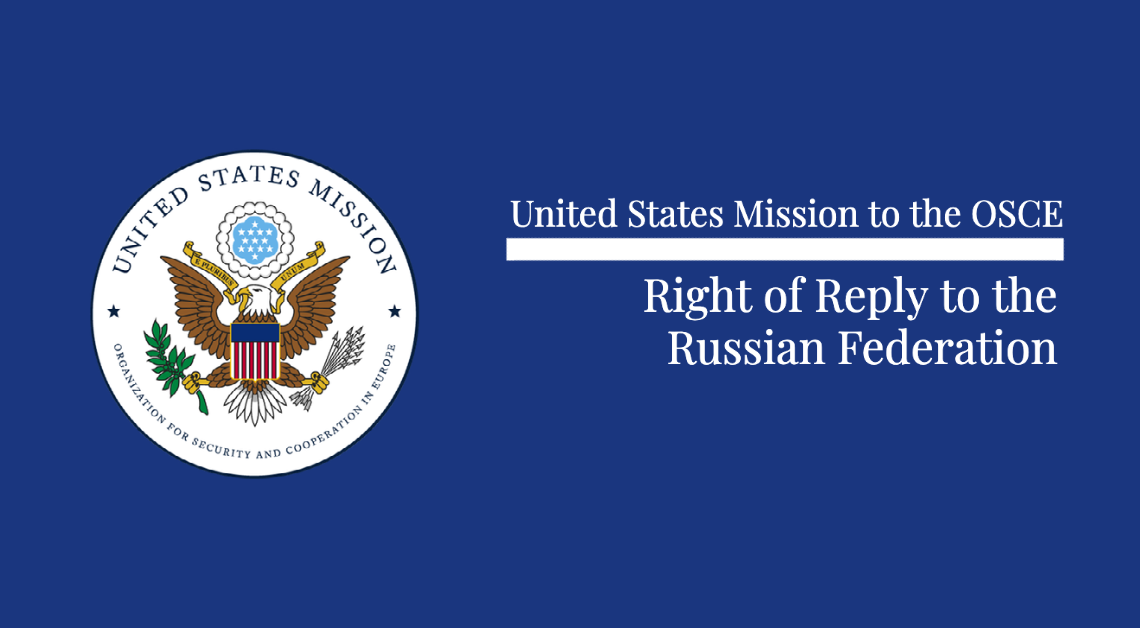 And we will continue to talk about Ukraine.  Because that is where the Russian Federation is violating the bedrock principles of this organization.

U.S. Right of Reply to the Russian Federation

What is unprecedented is the decision by Russia as a participating state of the OSCE to wage an unprovoked, full-scale war of aggression and territorial conquest against Ukraine.  During the entirety of this year, instead of working to strengthen the OSCE, Moscow has persistently worked to destroy its foundations.  Yet, thanks to the superb leadership of Poland as Chair-in-Office, not only has Russia’s constant obstructionism failed, but the OSCE has moved many groundbreaking initiatives forward this year, including the Support Programme for Ukraine and the hugely successful Warsaw Human Dimension Conference.  In fact, the Polish Chairpersonship-in-Office has been steadfastly defending the principles of this organization.  In addition to the new initiatives that I just mentioned, despite Russia’s obstructionism the OSCE continues to deliver on its existing mandates.

The Russian ambassador likes to cite, every time he’s in this Council, the Porto Ministerial Council decision.  I guess that’s what gets his heart racing.  But what he doesn’t speak to is Russia’s violations of the U.N. Charter or the Geneva Conventions or the Helsinki Final Act or the heinous war crimes and crimes against humanity perpetrated by Russia’s forces.  So when you talk about the acquis of international law that is vested in this organization, who is the one participating State that is undermining it?

And when it comes to visa decisions, since this was also a focus of the Russian intervention and that of my colleague from Belarus, these are and always have been the sovereign prerogative of individual participating States.  And I would note that the entire European Union has sanctioned Mr. Lavrov for his role in Russia’s war against an independent, sovereign neighboring country.  This July, I would also note I had the honor of being added to Russia’s visa ban list.  While it is indeed, as the Russian ambassador notes, a “discriminatory step,” it is one that I fully embrace.  I do not take offense, just the opposite. In any case, the government of Poland has no obligation to grant a visa to anyone who actively advocates for the violations of the UN Charter and the Helsinki Final Act.

Aleksandr Kazmirovich, you’re too smart not to know what we are saying here.  You know that we are not questioning the Porto Ministerial Council decision or the rules of procedure.  You know that we’re talking about the foundational principles of this organization and your country’s consistent violation of them going back to February 24th, but actually, well before that.  You know it, because you know that in the U.N. General Assembly, your country was labeled as an aggressor, not by one or two countries, but by 143.  So, you know all of this extremely well.

And you say that you’re not here to talk about Ukraine.  But I’ve got news for you. We are. And we will.  And we will continue to talk about Ukraine.  Because that is where the Russian Federation is violating the bedrock principles of this organization.  So we can talk about rules of procedure, we can talk about Ministerial Council decisions, but this body is going to bring the discussion right back and center it right where it needs to be: on fundamental principles and commitments.  And I know you know that.