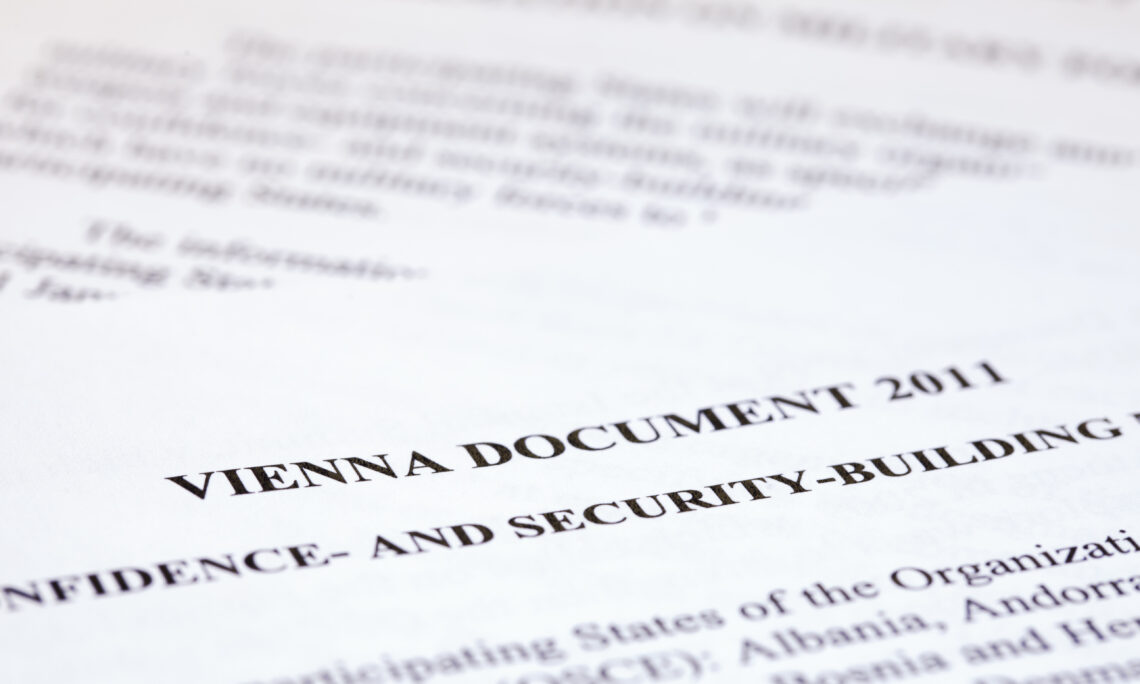 Vienna, February 3, 2021 – U.S. Department of State Bureau of Arms Control, Verification and Compliance Senior Bureau Official Bruce Turner met today with civil society and officials from the participating States of the Organization for Security and Cooperation in Europe (OSCE) at the Forum for Security Cooperation (FSC) to discuss modernizing the Vienna Document, a fundamental agreement that allows for information sharing and confidence building measures across all 57 member states of the OSCE.

“As the key set of confidence- and security-building measures within the FSC, the Vienna Document should play an essential role in promoting military transparency and stability within the OSCE area.” Turner stated. He continued, “in our view, restoring trust and increasing mutual confidence among the participating States, enhancing reciprocal military transparency and predictability, and reducing risk by updating the Vienna Document would be an important demonstration of participating States’ commitment to begin to address a number of the security challenges facing Europe today.”

The importance of this issue has been driven home by recent challenges within the OSCE region, including provocations from the Russian Federation, such as the purported annexation of Crimea. “The security situation in Europe has deteriorated sharply since 2014,” Turner said, continuing, “disregard for the OSCE’s foundational principles and international law are at the heart of this insecurity. Behavior that raises threat perceptions and threatens general stability, — such as large-scale, no-notice military exercises near borders, — undermines confidence and efforts to promote military transparency, risk reduction, and incident prevention.”

Both European Allies and those from the Non-Governmental sector echoed Turner’s position that the Vienna Document needs modernization. Stockholm International Peace Research Institute Program Director Dr. Ian Anthony spoke to the broader need for modernizing the Vienna Document in light of the evolution of military force structures and exercises.

Dutch Air Force Colonel Sylvia Babusch addressed Vienna Document modernization from an implementation standpoint, including how the joint modernization proposal supported by 34 participating States would improve implementation. Going back into history, she highlighted the Netherlands’ and trilateral BENELUX implementation practices, and the value of the military-to-military factor within the verification mechanism. Col. Babusch pointed out the best opportunity for success in verification would be in lowering the Vienna Document’s notification thresholds. Next to that, she described no-notice military activities as a source of concern and cause for mistrust and for a growing lack of confidence. Therefore, Colonel Babusch argued that, from an implementer’s perspective, modernization of the Vienna Document is deemed highly necessary. In conclusion, she shared her vision for the future in which she sees a change “from quantity in verification versus quality, quite thought-provoking.”